Ava Parker, shy, intelligent, and much more attractive than she realizes, is a top designer in the not-so-exciting world of underwear fashion for "mature ladies". When Ava finally gets the chance to design some sexy underwear for her flailing company's new underwear line, she never thought she'd end up head-to-head with charming, cocky corporate analyst Justin Barrett, who proves to be her perfect muse. Ava knows he's out of her league, and that falling for him can only lead to a broken heart. But how long can she resist, especially when the hotter the sex gets, the better her designs get? 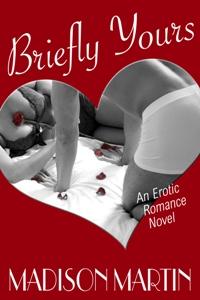 Excerpt:
In the dim light, she watched the firm muscles of his back when he pulled back the sheets and climbed into the bed. He reached for her, urging her to join him. When she slid in beside him, he put his arms around her protectively and kissed her, then rolled over until she lay beneath him.

He slipped the other strap of her bra down, unhooked it and took it off in record time. His warm mouth pressed against her bare shoulder. The cool air in the room washed over the hot, moist kiss he left there, making her shiver.

“Since we’re both almost naked,” she noted, staring down at her barely clothed self, “there’s no turning back now, right?” Why did she babble incessantly when she got nervous?

He pulled away for a second and looked at her. “You changed your mind?”

She watched him, her chest heaving up and down, and licked her lips. She shook her head. “No.” And then she gave him the hottest kiss, one she didn’t think she knew how to give anyone, her mouth finding his. His tongue sank into her mouth and she welcomed it, sliding her tongue against his and pulling him closer.

Justin finally drew his mouth away, planting wet kisses over her throat, exploring her down lower, until his mouth closed over one breast. She let out a little moan and leaned her head back, washed in sensation as his tongue kissed, teased and tormented her. He drew one nipple into his mouth and suckled until she ached between her thighs. She was too turned on to resist when he moved to do the same thing to her other breast.

She didn’t protest when his warm hand slid inside her underwear, his finger teasing, stroking, then slipping inside her, making her wetter.

“Are you nervous?” Justin murmured, his breath warm against her ear, and she shivered.

She shifted her hips. “Yeah, I…haven’t…done this for a while.”
She felt his muscles tense against her and he made a promise, his mouth against hers. “I’ll be gentle.”

She grasped the muscles of his back. What were those muscles called? She couldn’t think with his hands caressing her everywhere he could reach. All she could do was shudder with pleasure.

“What do you say we lose these?” Justin asked, pulling her panties off before she could answer. She shimmied her hips while he slid them down her legs and tossed them off the bed.

Carried away with the need to feel all of him, she reached down and roughly dragged the briefs off of him.

“Careful. Don’t want to rip your mock-up and ruin your life’s work,” he murmured, his mouth so close, his lips grazed hers. “Not that I’m complaining about…”

“I’ll make a new one,” she interrupted, her hands stroking the muscles of his behind. She caressed his stomach, and felt his breath draw in when she moved her hand lower, anxious to touch him. But before she got the chance, he pulled away and reached for the box of condoms.

He sheathed himself, and then settled himself against her again.
She felt him enter her just the slightest bit and gasped with the pleasure of it. He moved slowly before sinking in a little further, giving her a chance to absorb every detail of him, to feel the smooth muscles of his shoulders, the feel of his stubble underneath her fingers, the incredible way he felt inside her. Then he sank inside her to the hilt and she thought she may have bit his shoulder to keep from crying out. With a little moan she raised her hips, silently asking him to move, to ease the ache he’d created. He stayed still, driving her crazy with frustration.

Instead of answering, he leaned down and kissed her. But when his tongue pressed her lips open and sank inside her mouth, it was more than either of them could stand. She writhed against him, and he pulled out, thrusting back into her with a groan.

When he moved inside her again, Ava drew one leg up and across the back of his thigh, drawing him deeper. He moved back and forth, increasing his pace a little each time until she ached with desire, her body craving more and more, reaching for something just out of her reach.