In 1795 New Orleans, the Spanish controlled city struggles to rebuild after two devastating fires, and a young teenage girl is just as determined to leave her past behind and start anew. Celestine, the daughter of a Mississippi River prostitute spends most of her time hating herself, her life and the dirty men who rut with her mama. When she turns thirteen and her mama informs her she’ll be servicing the very men she hates and fears, she has no other option but to run to the good nuns of the Ursulines Convent where for the first time she encounters kindness and a different kind of life.

After meeting the dashing ship captain Maurice Dubois, a man with his own past demons to reckon with, Celestine allows herself to be truly loved for the first time. But when a shocking turn of events leaves her once again with nothing more than her own wits to survive, Celestine begins to realize the power her intoxicating beauty gives her over men including the debonair and infamous pirate Jean Lafitte. It’s this very power that Celestine learns to capitalize on to begin a new career...not as the common riverfront lady of the night her mother had been...but as the most sought after courtesan in all of New Orleans. 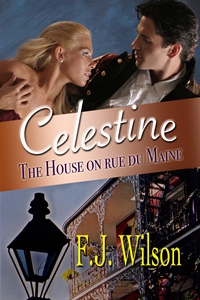 From Queenofthenightreviews.com
With an interesting heroine, several leading men and scintillating dialogue, F.J. Wilson captured my attention and took me back to a different time, when women had no political or legal power and mostly advanced through their wits.

From Sara Parriott, screenwriter,Runaway Bride, Desperate Housewives
I loved this book. I love to visit New Orleans and I never realized how truly colorful her people were in history. I'd like to create Jean Lafitte for the big screen and sit back and watch the audience swoon, only If I could play Celestine. I'm ready to read the whole series!

1795
‘Tine waited outside for the stinking customer to get off her mama and button his breeches. When he was done she could go inside and get warm; clean her mama and make sure she wasn’t sick on the bed. If the man was generous, there’d be enough money for supper. If not, she’d go hungry again and count the noises in her stomach ’til she fell asleep.

She sat on the carriage block crying into her papa’s old neckcloth. She carried it everywhere hoping he’d come to rescue them. He’d bring nice things to eat and maybe a new dress for her and her mama; she prayed on it, wished on it and tried to count on it. He’d been gone the thirteen years of her young life, but he could still come back; he could.

‘Tine hated men. She hated how they smelled of rum and sour living. She hated their dirty smelly clothes and their big boots full of mud and horse crap on her mama’s worn out rugs. She hated when they grabbed her mama, demanded, grunted and hit her for not being the woman they thought they deserved. But mostly, she hated her mama for allowing the horrible men to destroy and age her far beyond her thirty years.

The man was coming down the little steps buttoning his last button and spitting a mouthful of slimy brown tobacco juice into the street. He stopped to look at her.

“What? You want some too? Your mama said you might be ready. I’m spent; next time, baby tits.” He was looking her all over making her sick.

He grabbed the neckcloth from her hand and wiped the tobacco juice off his mouth and stuffed it down the front of her dress. Feeling around inside her bodice, he chuckled as he took his hand out and turned to walk away.

“I promise.” He said and let out a breath from a nasty place under his breeches. His horrible laugh and foul breath filled her nose and ears as he swaggered down the street.

She knew this was coming. Her mama yelled at her for a week; she was thirteen and time for her to take customers and help pay her keep. ‘Tine grabbed the dirty neckcloth out of her dress and threw it in the gutter. No one was coming to save her; she’d have to do it herself. God didn’t answer prayers from the daughters of sinful women who lay with lust crazed men. She’d be damned if she was going to wait for the man to come back. She’d kill him first.
She walked back into the dirty little room and packed her few belongings while her mama slept off the effects of the man and the rum. She went to the side of the bed and looked at the single picayune the man left. She thought of taking it; but decided she wanted nothing from the man, especially the tiny bit of money paid for rutting with her mama.

She walked back out and looked down at the neckcloth soaking up rainwater and horse pee. She picked it up, wrung it out and stuffed it way down in her ragged apron pocket and walked toward the Ursulines Convent.

The city of New Orleans was once filled with joie de vivre but since the big fires and hurricanes, it held only stink and sadness. The smell of sour ashes and the defeat of burned out hopes filled the air with misery and fatigue. The city was a good wife to some and a dock whore to others, and ‘Tine was certainly its daughter and the streets were her schoolroom.

She watched it burn to the ground from her hiding perch on the roof of the Ursulines Convent. The screams of burning men and women running out of houses toward the river still haunted her dreams. Mostly, they fell like pieces of charred wood from a neglected fire place; falling and rolling out of the burning buildings; their clothes smoking after their voices were finally silenced.

She watched from the roof of the French Market as the winds and waters of two hurricanes swept the city into chaos and death. The water took people and livestock, alike; some, still alive tried to swim through the big water. Others, their dead faces peaceful floated in the filth that’d been their world. She’d saved herself by quick wits and cunning.

She fought as well as any boy her age and cut many men with the knife she kept in her stocking as they tried to grab her, but she’d never cheated and she’d never lied. She was proud of that.

‘Tine knew everything about everything and everyone and what she didn’t know, she found out. She knew which white Creole gentleman kept a Quadroon mistress; how often he visited and how many children he had by both his wife and mistress. She visited the Vou-dou ceremonies to make gris-gris bags of black magic to use on her enemies, but rarely used it as it could backfire on a little girl who used it unwisely. She danced with the slaves on Congo Square and knew their patois and how to interpret their chants and messages to each other. She followed the food vendor’s home and picked up cake and fruit that fell from a basket worn on a tired head. But it wasn’t enough, her world was too small and she wanted more.

Next Weekend (MF)
H.K. Carlton
In Shelf
$2.99
Tweets by
sirenbookstrand