Christmas Nick for Everyone

It was Christmas time again and Evan was celebrating the same ole way. Not hanging with the fellas or enjoying a secret Santa exchange at a party, but back at his sister's house.

This year, however, would be a little different for Evan. This year he would learn that being a Good Samaritan had tangible benefits as well.

Christmas Nick for Everyone

“What’s up, sis?” Evan wiped crumbs off the table into a napkin and blew out the small candle in its center.

“Well, I know we usually spend Christmas Eve helping the Salvation Army guys pass out gifts together, but do you think you can handle it alone this year?”

“Well, I met someone and he wants to spend some time with me.”

His eyebrows rose. “You got a date?”

“What does that mean?” She sputtered as she donned her coat. “I can have a date.”

Evan tossed down his bar towel and trash, before going over to his sister.

“Now Mariah,” he said, taking her hand. “You know I didn’t mean no harm. All I meant was, well, there have been plenty of men that have asked you out since Ray died. You shot them all down, honey. Are you sure you’re ready to start dating again?”

“He’s really nice, Evan. I think you’ll like him.”

“He’s good man. We met at Mary’s Halloween party. You remember her, right?”

Evan nodded and took a seat.

“Well, he’s my friend Mary’s cousin. He moved to town at the end of the summer and she finally got him out of the house. We connected instantly,” she concluded brightly.

“Well, I’m glad. I’d like to meet him some time, preferably before I go home.”

“Of course. You can meet him tonight if you want.”

“Okay, great. I think it’s pass time you got back out there anyway.”

Mariah chuckled. “I agree. I think it’s pass time that we both got back out there.”

Evan made a frustrated noise as he jumped off the stool. “Let’s not start that conversation again. We’re talking about you, Mariah, not me,” Evan pointed out, going back to the row of tables.

“Oh, so it’s okay to talk about my love life, but not yours?” Mariah countered with her hands on her hips.

“Okay, so what are you saying?”

“What’s different? We want the same things, Evan. A handsome man with a decent job and a good grasp on what romance is so he can sweep us off our feet. Isn’t that what you want too?”

Evan listened to his sister as he moved to another table and couldn’t deny her statement. That’s exactly what he wanted. If she could throw in a little courtesy, some common sense and a sense of humor that would make him, whoever he is, close to perfect.

But was that too much to ask?

He would gladly give the same and much more to have a man like that in his life. Evan knew he couldn’t be the only one out there that felt this way, but it sure seemed like it.

When he was younger he thought it was all about looks. The beautiful people seemed to get whatever they wanted. That life called to him, especially when he worked behind the scenes at the TV station in the next town over. Beautiful men were everywhere. Damon though, taught him some were monsters on the inside. Their relationship left scars on the inside as well as the out. It was a lesson he would not forget.

“Well then, what’s the problem?” His sister questioned breaking into his thoughts. “I’m ready now and you should be too. It has been way too long for both of us.”

Evan released a sigh, gripping the table before him. “Mariah,” he said, turning to face his sibling. “The difference between me and you is you want to start dating again. I don’t.”

Mariah left the bar and stood in front of her younger brother. “Look Evan, I hate that you had to get one of the crazies for your first real relationship, but everyone isn’t psycho. Men like Damon do not represent the majority. There are plenty of sane, available men out there. You can’t keep denying yourself a true chance at happiness because you’re afraid.”

Her words struck a chord in him. He knew she was right. Evan rested against the table and threw his hands up in surrender.

“Good!” She grabbed his shoulders, kissed his cheek and smiled. “I think this upcoming year will be a good one for the both of us,” she exclaimed happily. Moving toward the door, she buttoned her coat. “Is it still okay that I leave early? It’s flurrying and the temperature is starting to drop. You know my hooptie barely runs when the weather is good,” she mentioned with a chuckle.

“Yes,” she answered over her shoulder.

“Do I need to find some place to go?” he asked in a teasing tone.

Mariah giggled. “No Evan, it’s not like that...not yet anyway,” she added with a lewd wink.

“Come on, Mimi! I could have lived a lifetime without the visual you just put in my head.” Evan waved her away and went back to cleaning tables.

Mariah laughed heartily. “I’ll see you at the house,” she said and shut the door behind her.

Evan shook his head and chuckled softly. He knew she meant well, but she was driving him crazy. With Mariah being almost ten years older than he, she had always been a little too over protective of him. Evan walked along the bar collecting the left behind glasses into a small grey tub he found under the bar.

If Mariah had her own love life to concentrate on she would leave his alone. He dropped one of the on the rocks glasses into the tub with a loud clank and scoffed. Love life. That was a joke. More like, lack thereof, if the truth be told. He hadn’t had anything that even closely resembled a love life since before Mariah’s husband died. A few dates here and there, a booty call once in a while, but no relationships.

“If it wasn’t for my job I’d have no reason for getting out of bed,” he mumbled.

Evan stopped and stood silent for several moments as the realization set in.

“Oh my God. I’m pitiful. My life is starting to mimic a country song. Maybe Mimi is right. I need to move on and try to be more positive like she is. If she can find someone after all this time maybe I can too.” He lifted the dirty dishes, heading for the back. “This New Year will bring something good for both of us because we deserve it.” 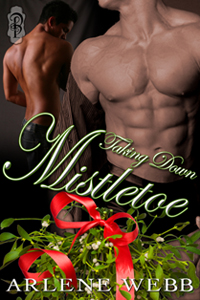 Taking Down Mistletoe
Arlene Webb
In Shelf
$3.99
Tweets by
sirenbookstrand