Erik Hendrix expected to be made Dungeon Master at Suite Surrender. What he didn't expect was to be competing for the spot. He also didn't expect that his competitor would be a very sexy Domme. Too bad he has a strict policy against dating another Domme. 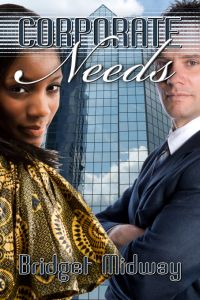 Princess Watkins sauntered down the hallway of Suite Surrender, a leash in her hand and her client puppy trailing behind her. She didn’t want to glance at the man on all fours, who now only wore bikini bottoms, and was rumored to be the head of the largest telecommunications corporation in the world. How the man managed to find this quaint bed-and-breakfast in the rural area of Virginia Beach with its unique services, she would never know.

Outside a set of imposing, heavy oak double doors, with black wrought iron bars covering the small window openings at the top, Princess stopped. Dipshit, her pet for the duration of his stay, decided that it was time to truly act the part of a young pup and scampered around her feet, wrapping his leash around her legs.

Damn it. Why can’t guys like these just have affairs like normal, uptight CEOs? Princess released a noise through her nose and mouth that contained both a growl and something close to a whine.

Dipshit’s antics wouldn’t have bothered her so much if she weren’t in six-inch, Lucite stiletto heels. She’d mastered walking in the skyscraper shoes. However, she didn’t count on the fact that her legs would be bound together by a sixty-plus year-old man with his ass crack showing through his black leather bottoms, and wearing glasses with lenses thick enough to see other galaxies.

The leather strap of the leash dug into her flesh. The stinging pain from the binding forced her to bite her lower lip while her body betrayed her. Her nipples hardened. Goosebumps prickled her flesh.

Until she looked down at the man-dog, her stomach bound into knots.

She had to regain control, show this idiot who had the power.

“Heel. Shit. Heel!” Princess tipped over, slamming her hand against the door.

“Who is it?” a voice called from inside.

“Woof! Woof!” Dipshit barked. Slobber oozed from the corner of his small mouth.

Holy hell. Although May had asked Princess not to, she couldn’t help but roll her eyes at the man’s behavior.

“If you keep rolling your eyes like that, the clients will think you’re bored and don’t care,” May had told her.

Damn, Princess didn’t want to make it obvious, but in the last year something in her died. Making the type of money she made here to release her frustrations on men who wanted to be her slave, how could she not be happy…or at least content?

Princess managed to wriggle one leg free from the leash binding. She braced her hand against the door as she attempted to untangle the other leg. Like the dog he pretended to be, he sat on his ass with his fists on the floor, and panted with his tongue hanging out to round out the look.

At that moment, she wanted to ask him why the hell did his company release an expensive-ass phone that was the hot thing, then upgrade the same model and put that one up for sale a month later. She’d sunk a pretty penny for the original. It pained Princess to part with her dough. Maybe this guy needed to feel some anguish.

For letting her waste her funds on the first version, Princess raised her foot to give the pretend pooch a kick. The door she rested her hand on flew open, sending her hurling toward the floor.

A set of arms netted her before she reached the ground. The stumbling motion pulled on the collar attached to the leash, making Dipshit’s head jerk forward. For good measure, he yelped as though in pain.

When Princess gazed up, May stared back at her. The shy, timid woman who ordered margaritas with sugar on the rim had disappeared a couple of years ago. The woman holding her exuded confidence and a sexuality that rivaled even Princess’s swagger.

May peered over Princess’s shoulder. “You know the rules. No pets in the office.”

Princess glared at the pudgy man. “Trust me. I was not bringing him in here.” She righted herself and managed to untangle her leg with May’s help. “Actually, I was heading to—”

“Do you have time to come in and talk to me?” May took a step back to usher Princess into the office.

“Um, sure.” Princess returned her attention to Dipshit. “Go outside and play.”

Dipshit panted faster and jumped around in a circle. Before he could finish his headache-inducing dance, Princess slammed the door and swayed to a large high-back chair in front of May’s desk.

Princess had never noticed until now that distressed wood made up May’s desk.

As though reading her thoughts—or perhaps Princess’s staring at the piece of furniture gave her away—May said, “They’re the doors from the old Oh Club.”

Princess volleyed her attention between May and the unique furniture piece.

“Before they tore the place down, Win got the doors and had them made into a desk.”

With great trepidation, Princess reached her hand out and smoothed it over the desktop. It felt as uneven as it looked, and the rough exterior matched the actions that had gone on inside of the club.

A slow, easy smile pulled at the corners of May’s mouth. “I met the man of my dreams there. That’s the only good thing I recall when I think of The Oh Club.”

At hearing May’s admission, a realization hit Princess. May probably showed her appreciation and gratitude to her husband in a physical way, right on top of that desk where her hand sat. Princess withdrew her hand and placed it on her lap.

“So, what’s up, Boss?” Princess crossed her legs and leaned back in the chair.

For whatever reason, her inquiry produced a chuckle from May.

“Remember the night you brought me to The Oh Club for the first time? We had gone out to that Mexican place for drinks first. You and I toasted to the idea that all bosses should rot in hell.” May laughed.
Princess shook her head. “Man, that seems like a lifetime ago. I can’t believe you remembered that.”

With the clarification made, Princess shrugged. “She was all right, I suppose. Just a strange business for her to do, you know.”

“What do you think of our little business?” May leaned back in her swivel chair.

“Are you? You’re working here. Why do you still do it?”

The query forced Princess to ponder her decision to stay. The salary promised and delivered to her more than made up for any second thoughts. Something more kept her wanting to stay in an industry where pain equaled pleasure. She liked controlling a person’s bliss and agony. She did wonder if she should be the one having the power.

That little bit of doubt pecked at her psyche a little more each day. She chalked up those negative thoughts to her past, how she grew up and her less-than-stellar influences.

Despite that, or maybe because of it, Princess had grown stronger, independent, self-sufficient. With guys like Dipshit, she managed to silence those doubts in short order.

“If five-oh comes up in here, I think you and Win will get the brunt of the charges. A first-time offender like me might get off with a slap on the wrist.” Princess glanced at her fingernails. “This is Virginia. Virginia is for lovers, not for ass-beaters.”

May shook her head before she answered. “We’re not hurting anyone. Well, not anyone who doesn’t want it.” She winked. “Like The Oh Club, no one here has sex for money.” Then she regarded Princess for a while as though challenging that assumption.

“I know that. You were very clear on that stance at The Oh Club. I have to be honest with you, Princess. You don’t seem like yourself these days. Are you okay?” May stood and walked around her desk.

In her long, flowing caftan, May now reminded Princess as some sort of Mother Earth figure. All she needed was a crown of flowers on her head of flowing dark brown hair and a couple of chirping birds by her side.
Princess couldn’t deny, though, that May radiated more now than she’d ever seen her, even back in high school. Her golden brown skin could make a supermodel envious, and May always had a way of drawing people in with her large, soulful eyes. Her gaze could sway even the most stubborn person.

Princess took a deep breath before answering. “Girl, you know me. I’m just fine. Sure, that whole shakedown at The Oh Club scared me. I’m just glad I wasn’t there that night. With what you all pay me, I don’t have any right to complain.”

“And for what you do around here, you should be proud of yourself. You get a lot of repeat customers, Princess, or should I say, Mistress Agony. I kind of like Mistress Payne, though. I’m sorry you’re not still using that name.”

“I didn’t want to hold onto to that old name.” Princess shook her head. “Nah, a clean slate. That’s what I needed.”

“And how’s your social life?”

Just May’s luck, she’d found her knight in shining leather chaps. Meanwhile, Princess worked at that place for nearly two years before that and never found a suitable prospect.

“Social life? You mean a love life? Hard to have one when I spend most of my time here.” Princess kicked her foot back and forth.

“So what? I haven’t met anybody. I’m not going to meet anyone here. I’m fine with that.”

May held out her hand. “Stand up.”

“For what?” Princess crossed her arms over her chest.