Cougars on the Prowl

Bigtime is a contemporary comedy about a down-on-his-luck author, Jed, who reluctantly agrees to teach a creative writing class in his local community centre. Tammy might be his least talented pupil, but what this mature siren lacks in the creative writing department, she more than makes up for during their extra-curricular action after every class: If she could only write like she could fuck, Jed thought in desperation; she’d win the Man Booker every year. When Jed refuses to enter her work in the regional writing competition, however, Tammy delights in her perfect revenge.

Get lost in the world of the Orgasm Bandit, a mysterious stranger who claims he can make any woman experience absolute pleasure. Is he real or a hoax? And will Shaquanda – still desperately seeking her first orgasm at 39-years-old – ever find out his true identity?

Fast and Foxy by Toni Sands

Stunning retail goddess Roxanne likes young men and fast cars. She’s driving to an appointment when a luxury saloon overtakes her but the driver isn’t the tycoon she anticipates. Both cars become snared in traffic. With Roxanne eager to avoid boredom, it’s not just the engines overheating as Gorgeous Grant finds his older woman fantasy fuelled. The two discover more in common than a love of speed when a cup of coffee at the services sparks unexpected use of a car wash. Anticipation accelerates until an evening rendezvous when Grant reveals just how skilful he is at negotiating curves.

Lust on the Lot by Thomma Finland

Ever wonder what goes on behind the scenes of a Hollywood movie? How do actors entertain themselves when they have early morning calls on the studio lot? In Thomma Finland’s Lust On The Lot, you’ll get the answers to all those questions and discover how a new actor teaches a seasoned actress a thing or two. In this story it’s not about the lights and it’s not about the camera; it’s all about the action.

Hildy is a self-confessed cougar, who finds no greater pleasure in life than her Playtime. When she meets nervous music student Neil at the cocktail bar, she has found her evening’s prey. Will the prospect of an experienced woman add to his nerves or banish them? And when it comes down to it, is this predator willing, or indeed able, to accept that sometimes the prey can bite back, and more...? 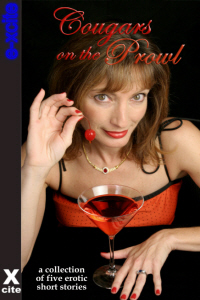 Cougars on the Prowl

Tammy continued to pout, but a steely glint appeared in her eyes, and suddenly she made an inventive and creative move of her own. Unseen by her fellow students, she parted her thighs to reveal a pink g-string which was struggling, and failing, to contain her plump and enticing lips. She shifted slightly, encouraging the material even further to one side, so that the intricate and mysterious form of her cunt was not only visible, it was calling out to him, teasing him. This cougar knew exactly how to demand his attention.
For the rest of the lesson, all Jed wanted to do was push aside Tammy’s desk, lower her to the ground and thrust his stiffening cock deep inside her. Instead, he sat down, masking his bulge with an A4 notebook, and continued, painfully, to elicit characters from his group. When the class was over, and the participants filing out, Tammy made an approach.
‘I can see I’m going to need extra tuition,’ she told him. ‘Cause I’m determined to make it as a writer.’
‘I live above The Black Horse,’ he said with a gulp. ‘We could always have a session there.’
‘I’d like that. You stallion.’ She giggled cheekily.
They were halfway up the wooden staircase when Jed couldn’t wait any more, and grabbed her from behind, swung her around and kissed her, hard and deep. To his relief, she kissed him back just as enthusiastically. Before he even knew it was happening, his right hand had migrated down her body and up her skirt, and his fingers were sliding in the place where lacy fabric met moist flesh, and his middle finger was already tunnelling inside her vagina, while his forefinger began to stroke her clitoris.
Her breasts were still bouncing in that tight pink top of hers, but happily for Jed, Tammy pulled it up, revealing a see-through pink bra he’d never have imagined on a mature woman; boy, did she know how to defy stereotypes and pull it off, Jed marvelled. With a smile that could harden butter, she reached round to unclasp it. As her breasts were unleashed, Jed wondered how long it had been since he’d held such a joyful, jubilant pair. Smearing her nipples with her own juices, Jed then licked and sucked and devoured them; her nipples felt large and sweet in his mouth, and he thought that he could happily die, there and then, smothered by her fleshy skin.
There were worse ways to go.