The walk back to the car was all about the M’s and their official run at the Division title, or at least a Wild Card. But back in the Porsche, it was Greg who rekindled the Keaton story.

“So, about Diane Keaton, right? That was the subject we were on before the home run blast.”

“Yes, I believe it was,” Ellen said, trying to not sound too wanting.

“Well, it was a coincidence, really,” Greg began. “I knew you reminded me of someone when we met, but I couldn’t think who. That night I was surfing the movie channels and saw this movie with Jack Nicholson that I hadn’t seen before. I love everything I’ve ever seen of his movies, so I turned it on. The first time Diane Keaton appeared, I said, ‘that’s who she is!’”

“I’m very flattered,” Ellen said. “She certainly has aged well,” she added, and then winced. Why did I have to bring that up?

“There was something else in that movie, too,” Greg continued. They had turned off the freeway and were on the state highway that would take Ellen back to her home. There was still time to find out about that ‘something else’ in the movie, thankfully.

“There’s a couple of scenes where she’s dating the doctor that treated the Nicholson character after his heart attack.”

“A young doctor, as I remember the movie, much younger than her,” Ellen noted. “Keanu Reeves, I think, was the actor.”

“Yes, that’s right. Well, the thing that was so strange was that I’d been wondering ever since I asked you about the going to the game with me whether you had time to think it over and had maybe decided it was just too weird to go out on a date with me.”

“I never thought that,” Ellen said. “In fact, I wasn’t sure until you showed up with the flowers that you were even thinking it was a date.”

“I wasn’t. It was the movie that changed my mind,” Greg said. “When I saw Keaton and the doctor going out together and how much he liked her and especially how much she liked him, I thought, ‘What the hey? If they can do it, so can I.’”

“I’m glad you thought this was a date,” Ellen replied. “I’m just sorry it’s over already.”

“It doesn’t have to be,” Greg said quickly. “I mean, if you’d like to, there’s a little restaurant I know close by. I stop in there for lunch sometimes. ‘Harry’s,’ it’s called. We can stop for a bite or just a drink.”

“I’d love to,” Ellen said, and touched Greg’s knee approvingly. Her breath caught when Greg placed his hand over hers and squeezed it.

“I’m having a great time, El,” he said to her. “And I don’t mean just because the Mariners won, either.”

“I am, too, Greg,” she replied. “I wasn’t sure how this would turn out, but it’s the best date I’ve had since my late husband first asked me out.”

“Now it’s my turn to be flattered,” Greg said. “I’m actually honored to be put in the same category as him.”

“Then let me say this so we can get it out of the way,” Ellen replied, and moved closer to him. “My husband was a good looking man. But you are the most gorgeous human being I’ve ever seen in my life. There, I’ve said it, and I don’t regret it, even though I know you’ve probably been told that a thousand times. Maybe a million.”

“But never by someone I ever wanted to hear it from until now,” Greg said. “And I don’t know how to say this any other way, but I’ve never had the hots for a woman the way I have for you. I’ve wanted to ask you something in the worst way all night, but I’m terrified by the answer I’d hear.”

Ellen repeated the words to herself immediately to make sure he heard right. She kept her gaze straight ahead on the dark highway split by the Porsche’s headlights. She tightened her grasp on Greg’s leg.

“The answer is yes, Greg,” Ellen said, still staring straight ahead at a dark road that suddenly filled with both mystery and promise. “And it was yes from the first moment we met.”

She felt his hand tighten around hers. “Then should we just—” he began, but Ellen interrupted with, “Yes to that, too.”

They drove past the entrance to Harry’s, by which time Ellen had moved her hand upward and was gently stroking Greg’s bulge now. “Maybe next time, Har,” he called out.

She stared at him as if her eyes were falling out of their sockets and into his. My God, this man is unbelievably beautiful.

“Well, I don’t want to impose...” Greg began in a sheepish tone that Ellen couldn’t decide was sincere or merely playful.

Greg did as he was told and Ellen folded the throw rug to give her knees some cushion. She pulled her bra off her shoulder and let her blouse slide from her as well. Dressed in only her panties, she looked up dreamily into Greg’s eyes and said, “I hope you can last awhile. I want to spend some time with it.”

Ellen massaged the outside of Greg’s pants. She had a pretty good idea just from the outline in his pants and the feel of it in her hand, that he was as well-endowed in the equipment department as he was everywhere else. God, how is a specimen like this still available at all, much less to me?

But he was available to her, and Ellen meant to take every advantage now of what was available and to make sure he had the best blow job he’d ever had. She figured conservatively that she had some stiff competition to address.

“Greg, this feels so big to me,” Ellen began, knowing that stroking his brain while she was stroking his cock should double his pleasure. “I hope I can get the whole blasted thing in my mouth.”

Ellen smiled up at him, stroking and then lightly kissing the bulge, brushing her lips as she did so.

Greg would pull her head toward him and Ellen would bob against his crotch. Soon, the two had fallen into a steady rhythm. Ellen bobbed on Greg’s crotch in time with his pulls against the back of her head. She let little snippets of sound emerge from her as she did, and she could feel Greg stiffening in pleasure from it all. She craved to yank his pants and shorts down and release that fleshy monster she knew was waiting for her, but wanted Greg to be in complete control of her actions. Come on, you beautiful man. Tell me what you want and I’ll do it.

Finally, Greg pulled her head against his crotch and held it there, grinding against her face at the same time. “Oh God, El, I need you to suck me.”

Ellen looked up and purred softly, “That’s what I’ve been waiting to hear, my big guy,” she said, licking her lips. “I want to give you the time of your life, so try and hang on as long as you can, okay?”

“Okay,” Greg said, and Ellen noticed how weak his voice had become.

Ellen unbuckled Greg’s belt and slowly unzipped him, letting her fingers brush his cock as much as possible while she did so. She kissed the damp spot on his undershorts, and then she ran her tongue up and down the impressive girth and curve of his cock. Whew. Is this thing ever gonna fill my mouth!

She played with his cock, still sheathed in his shorts. “I am so looking forward to seeing this guy and seeing what I can do to him,” Ellen said, looking up at Greg as she stroked him below. She could see in his expression that he was barely conscious now. She had complete control of him, and she planned to use it fully to her wishes and desires. As she stroked, she noticed how power and control shifted easily between the two of them, both giving and receiving in perfect harmony and trust. Please let this not be just a one-night stand. I’m already thinking that I can’t live without him.

Ellen sought to try and create that same feeling with Greg now, whether it was fair to him or not. I want someone for the first time in five years and I can’t let it matter that he’s a lot younger than me. I want to give him every opportunity to know I’m his if he wants me.

“Big enough?” Greg asked, and Ellen knew his question was a sincere one.

“Any bigger and you would choke me to death,” she said. “Not that that would be an issue. Actually,” she said as she took it in her hand, and was pleased to see how she could barely get her fingers around its circumference, “this guy may do the trick anyway.”

“Well, I don’t want you to choke to death,” Greg said, and El saw the look of real concern on his face.

She smiled. “Don’t worry, darling. The deeper this goes down my throat, the more I’m gonna love it.”

And with one sudden gulp, Ellen gobbled the huge cock down. 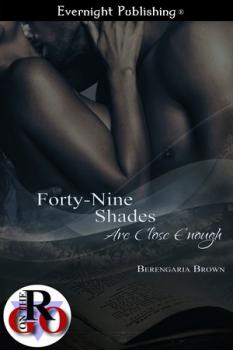