Ray Mankiller is a Two-Spirit Native American. Two-Spirits are people whose bodies contain not just one soul, but two, usually a male and a female spirit. He has known this since he was a child, but it is only recently that the dreams have begun. In these dreams he sees the ancient past. He sees a Two-Spirit like him, but unlike his modern world, the ancient world was dangerous for a Two-Spirit who was also born of a witch. In this tortured world, Deer Tracks, the Two-Spirit of his visions, has visions of her own. She sees the death of the one she loves at the hands of a hated shaman, Lazy Duck. She knows he will stop at nothing to possess her, even though in body, she is a male. It is said that a Two-Spirit brings great power to the one he or she marries.

The visions are not enough to distract Ray from the problems he is facing in his own life. A newly hired professor of Ceramics at the University of Mississippi, he soon finds that one of the faculty members hates him and wants to destroy his chances of ever becoming tenured. He seeks shelter in the strong arms of Angus Tanner, a professor of Anthropology who is fascinated with Ray’s story…and with his body. When the tendrils of the past start to snake their way into the present in the form of a cursed figurine, Ray is faced with the most terrifying visions—only they are of the present, not the past. He must find a way to destroy the evil ghost of Lazy Duck before history repeats itself. Is he dragging Angus into a trap he himself set in another 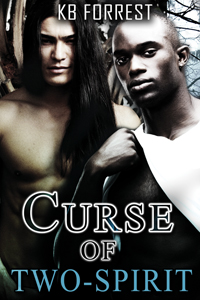 He used a rubber band to tie back his long hair then he wrapped a piece of rawhide over it. He thought about it for a minute and took it off. He thought it might make him look like he was trying to make a big deal about being a Native American. In fact, during the interview, which was grueling, he’d been given a few minutes to use the bathroom. About to turn the corner when returning, he realized that they were talking about him, and stopped.

A woman’s voice said, “He just looks too young.”

“His portfolio is outstanding,” another argued. “He’s had four very successful shows.”

A man groaned. “The guy from Vandy had more of a presence. I just wonder if this guy will be a good fit. Are we just fawning all over him because he’ll give us our minority quota?”

“Look, that is important, but still, that doesn’t mean he isn’t good.”

The groaning man said, “Jeez, Bill, that’s not what I’m saying. It’s just that you have to remember that we’ll have to put up with this candidate for good. I mean you know how important fit is. We may be older people here, but what about Marianne, Jackson, and Benny? Remember how our kids did everything together. Being a faculty member isn’t just about the job. If this guy is as gay as he looks…”

“Oh fahcrissake, you know what I mean. Will their kids go to soccer practice and softball together? Will the younger faculty be able to count on him to carpool the kids to piano practice like we did? I mean this is all important stuff. And one of his exhibits was celebrating this Two-Spirit business. Do you even know what that is? Well I looked it up on the web and Two-Spirits are some kind of transsexual men. You know, men who want to be women.”

“That’s not true,” a woman said. “I asked him, and he said that they believe that a person can have two spirits, a male and a female spirit. They were considered a kind of shaman by the tribe.”

“Well, fine then, but he is gay by all signs. That’s neither here nor there nowadays, I guess, but I still ask you to remember that we are a community. What is best for the whole?”

They fell silent. Ray knew he had to do something, so he quietly retraced his steps and then walked down the hall with much noise to herald his arrival. Everyone smiled graciously, but what he’d heard had made him sick to his stomach. That evening, they’d taken him out for the required candidate dinner. They had battered him with questions non-stop. As soon as one person asked a question, and began to eat while he answered, another would take the turn to ask. Then the man whose voice he recognized as the one who opposed his hire asked, “What’s wrong? Don’t you like Southern food? If you want to work here, you’d better get used to it—after all, this is Mississippi.” He’d followed this with a laugh, and Ray had tried to smile.