Tambra Ellis has just had her world turned upside down. Surviving a bite from a Lycan, attracted to one hot vampire and now she has to look forward to turning into something from some bad werewolf movie.

Marcus Valerian has enough on his plate without the added complication of Tambra Ellis. Fiery and independent? Sure. Beautiful with a body made for sin? Oh Yeah. She's also a human cop. Tambra is everything he needs to stay away from.

As leader of the Tribunal’s enforcers it’s up to him to find out why the Dark Breeds are going feral and killing humans in ever increasing numbers. Tambra’s life is in the balance as the secrets of her past place her in the middle of a battle that will change the world forever.

Will Marcus and Tambra’s love survive or will it too late?

Marcus moved to the door in a burst of speed, and stopped with his arms folded across his chest, lips compressed into a thin line as he glared at her. He drew his brows low in a scowl.

“W…what the hell are you?” she stammered, unable to mask her unease.

“I am not here to harm you. I have been the one tending to you as your body adjusted.” “You haven’t answered my question,” she pushed.

“That’s because it’s not relevant to the situation.”

“Like hell, asshole. If it affects me then it is my business.”

Marcus liked her toughness, finding it remarkably refreshing. Her strength was impressive, not many could make it through the beginning stages of the change when turning from human to Were, yet she had fought through it. She had overcome it all, despite how badly she had been injured.

He used his most reasonable tone to calm her, knowing that the next few minutes was crucial to keeping her receptive to what he had to say. He took a deep breath and let it out slowly, making his tone as calm as he could manage. “At this time the only thing we need to focus on is your change. You are not out of the woods as of yet. There are too many things that could go wrong.”

Her eyes widened in horror as she took a shaky step backward.

“Believe me, they do exist. Denying what you have seen will be foolish and dangerous, for you and everyone you’re around.”

“No. I don’t believe this. I won’t believe it. There has to be some logical explanation for what I saw.” The sharp edge of hysteria rose in her voice. “I will not turn into a dog. I don’t even like dogs.”

That made him smile despite the seriousness of the situation. She was absolutely adorable and he was in deep shit because of it. Yet, he couldn’t seem to make himself care. “Wolf, not dog. You were bitten by a Lycan, not Lassie.”

“Ha, ha, laugh it up big guy. You don’t have to worry about fleas.”

Laughter rumbled out of him, surprising him as much as it seemed to anger her. Tambra stood in front of him, her golden hair tumbling wildly down her back, clutching the comforter tightly to her breasts. Her blue eyes glittered with anger and Marcus fought the urge to pull her into his arms and stroke her soft, creamy skin. He clenched his hands into fists and kept still. She was still too pale, evidence of the weakness he knew was plaguing her but, damn, she was magnificent. A true warrior, ready to fight regardless of the fact she couldn’t win.

His blood headed south as he remembered stripping her out of her torn and bloody uniform, seeing her full breasts, tipped with pink nipples that begged him to take them into his mouth. Her tiny waist smoothing into shapely hips and a firm and heart shaped ass. He wondered how it would feel in his hands. Her legs were long and lean, he wanted them wrapped around him while he filled her, wanted her screaming his name with her release. She was heartbreakingly beautiful and though he knew it was wrong, he was sorely tempted to risk it just to feel her lips against his, her taste in his mouth.

That was not going to happen, he reminded himself, burying his attraction in the deep recesses of his being, where it could be locked down tight.

If Tambra survived the Rising, Fox would demand to take her, acclimatize her to her new existence, and teach her the laws of living under Lycan rule. Marcus would never see her again.

The one bright spot was that Zeke, their guru for all things tech, had found that Tambra had no living relatives. No ties binding her to her old life as she adjusted to her knew one. Her father was deceased and her mother had abandoned her when she was an infant.

“This is not funny,” Tambra spat, her back straight, chin held high. “I will not be held against my will. I’m a cop and people will look for me. Do you want that kind of trouble?”

“You are already trouble. Just by breathing,” he growled. “You cannot leave here without an understanding of the world you are about to enter.”

“I get the feeling I’m getting deeper into that rabbit hole,” she sighed. “So, I’m turning into a werewolf at the first full moon right?”

“Wrong. You are becoming a Lycan.” He held up a hand stopping her questions before they even got started. “You were bitten by a Pure Blood, a Lycan. In the Lycan world there is a structure much like that of a monarchy. You have the Pure Bloods, the royalty, who rule their Breed. If a Lycan bites a human, that turns the human into a Pure Blood, but if that same human bites another human, then they are called a Were since they have more human DNA than Lycan, and more limitations to what they can do.”

“Weres can only turn on a full moon, Lycan’s transformations are not limited. It’s not only wolves either. There are many types of Breeds in the shape shifting community that are identified as Weres and all have their own unique structure, yet it is only the wolves or Lycans that consider other Weres as beneath them.” Marcus’s voice held bitterness.

“No. I most definitely do not,” he stated firmly.

She tilted her head, studying him as she digested everything he just said. His gut churned, instinct told him she was taking everything he had thrown at her too calmly. She was up to something, but he couldn’t tell what.

“And what are you, Marcus Valerian?” 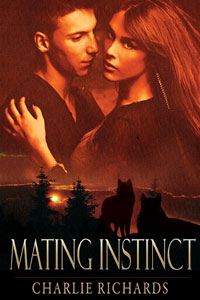