As site supervisor on an archaeological dig, in the grounds of the Ancient Roman city of Leptis Minus in Tunisia, Dr Beth Andrew’s hands are well and truly full. Her first foreign excavation, which she co-runs with the American archaeologist Dr Harrison Harris, gets off to a shaky start due to the jealous interference of Harrison’s ex, and an overzealous student... Love and lust really can cloud even the cleverest person’s judgement! 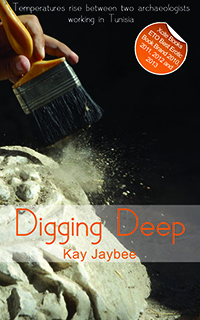 Irritably adjusting her wide-brimmed hat for the third time in as many minutes, Dr Beth Andrews felt the sting of the African sun sear the back of her neck through the tresses of her long, ginger hair.

She never dreamt she’d miss the stubborn, muddy clay of the British earth she was used to hunting through in her search for archaeological data, but the uncooperatively fine white sand of North Africa was enough to try the patience of a saint.

Throwing down her brush in overheated exasperation, Beth thought fondly of her excavation trowel. Her tool of choice had quickly been rendered obsolete in the face of so much sand, and a job that was, by necessity, slow was reduced to a snail’s pace as the metre by metre square of the Ancient Roman bath house site in which she worked backfilled in on itself with every sweep of her light bristled brush.

It had been a dream come true for Beth when she’d been selected to lead the University of Wales’s excavation team, digging the sprawling Ancient Roman city of Lepti Major on the outskirts of Sousse in Tunisia. She had longed to experience new exotic sites and see new exotic sights. The chance to uncover stunning mosaics and city roads that hadn’t been trodden for 1000 years was an opportunity she’d had no intention of letting pass by.

The fact she’d be sharing responsibility for the site with her archaeological hero, the unimaginatively named Dr Harrison Harris from Colorado, an American academic who’d been the subject of many of Beth’s private fantasies since she’d fallen in love with his work, not to mention the photograph of him on the back cover of his books, in her first year as a student, was neither here nor there.

Flicking her eyes covertly over towards Harrison, Beth averted her attention away from the slight increase in her pulse rate by recalling what the site’s previous supervisor had said about working in Africa’s extreme temperatures. “Scalding by day, and freezing by night”. Linda had warned Beth that her freckle-spotted, sensitive flesh would loathe being either fried or frozen just as much as her archaeological brain would relish the challenge of constructing a city from its remains.

Beth hated the fact that Linda had been right. She’d never been rendered so sweaty, not to mention so blotched with extra heat-induced freckles, in her life. There couldn’t have been a centimetre of her body that hadn’t got a fresh cluster of beige dots on it. After only a week under the sun, it was becoming a struggle to hold on to her generally calm approach to life, and Beth was finding that her temper, which rarely flared in the UK, was on a permanently short fuse.

What got to her most was that none of her colleagues seemed to be suffering at all. They were all happily tanning as they worked, and sleeping off their exhaustion with ease at night.

This specialised amusement had the benefit of taking her mind off the sun that managed to scald her back even through three layers of thin cotton, and had the added bonus of warming her at night. Lying on her thin camping mattress, Beth would recall all she’d pondered during the day, engendering an ardour between her thighs that her fingers deftly maximised, leaving her physically warmer and bodily sated, and thus making it easier for her to fall asleep.

Manoeuvring a layer of burning sand from one side of her section to the other, Beth considered her colleague. His reputation as an expert in Roman archaeology was renowned. Beth had never dreamt she’d ever meet him, let alone work with him as an equal. His knowledge and academic intellect had been enough to make her heart flutter for years. Yet what Harrison was like in reality was not at all how she’d assumed he’d be.

Lost in Paradise
Tianna Xander
In Shelf
$3.99
Tweets by
sirenbookstrand