So much for a vacation…

Laurent, Brandi, Jett and Sophia decide to take a much-needed vacation in the beautiful Caribbean. And all hell breaks loose. Sophia wants to eat the tourists. Jett has daddy issues, and Brandi has to go to work, learning to transport dead Norse warriors to the afterlife. All the while, Laurent is trying to keep his family together.

What else could possible go wrong? 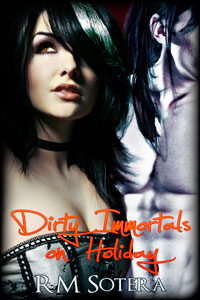 When the last note ended, she removed her clothes and let them fall around her feet. Tonight she didn’t want the seduction of removing each piece carefully and methodically. She pierced him with a heated gaze, and in response to her unspoken desire, Laurent gathered her in his arms, walked off the dance floor toward the bed, and dropped her gently in the center of the mattress, then straddled her.

“I believe you’re overdressed,” she whispered. His strong sexual scent lifted from his pores sifting right into hers. A crackle of energy passed between them, hot and raw stirring the deep sexual hunger to life in her mid-section. Anticipation thickened the air in her lungs.

“Do you now? What are we going to do about this dilemma?”

He cupped the cool soft flesh of her breasts with both hands, running his forefinger and thumb over her hard nipples. Her demigoddess status had its advantages and softness to her skin was one of them. Normally vampires didn’t have soft skin, not like humans, but she did and she hoped he liked her softness, the way her stimulated breasts reacted to his touches. Yes, her breasts were definitely happy to see him.

When he bent down and sucked her right nipple into his mouth, her butt rose from the bed. “Easy, darling,” he whispered against the rock hard nipple between his lips.

She moaned, a sound full of desire, need and want. “Take me now.”

He released her nipple. “Patience is a virtue.”

Another moan slipped from her lips, and then she dug her hands into his hair and raked her fingertips through the long strands. “You make me feel so fucking good,” she whimpered.

If there had been any doubt in her need before, there certainly was none now. She panted, squirmed, and dug her nails into him. She wanted him in the worst way.

“My cock is rock hard, ready and waiting,” he whispered against her sensitized flesh. “I am prepared to drive you to your sexual brink, without totally breaking you, many more times tonight before giving you what you ultimately desire.”

Gazing into his passion laden eyes, she watched as he undressed, then sucked his finger into his mouth right before he slid that same saliva sheathed finger deep into her pussy.

“Oh gods,” she whimpered and pushed her pelvis forward, clenching his finger with her kegel muscles.

“They have nothing to do with this. It is all me.”

Slow and careful he moved his finger in and out, and she moved her little hips with the motion, kept in step with the speed of his finger. That was until he slipped a second finger into her pussy. Her wet sheathed center contacted against his fingers, her breath labored.

“Ma minette,” he breathed the words against her lips. “I told you once, they have nothing to do with this.” He fingered her pussy faster, harder, and deeper. “Perhaps you should say the name of the source of the pleasure. Oui?”

Her body was at its breaking point. She could almost taste her crazed passion. With his fingers still sliding in and out of her slick mound, he slowly turned her, and she whimpered softly as she landed on her stomach and crooked her face to the side. He ran the open palm of the other hand against her thigh until he’d reached her ass. On her moan, he slid his fingers out of her pussy and into her ass. Had she still been human this act would have freaked her out—the possibility of contracting an infection going from one hole to the next without a proper cleaning—but she wasn’t human any longer so it wasn’t a worry. He gently nudged Brandi’s thighs open with his knee.

She spread nice and wide for him.

His fingers played in her tight ass. Between her sighs and moans, she reached back and cupped his cock, stroking the length of it as he finger fucked her ass. He growled deep.

“Fuck me,” she whispered.

“What?” He leaned forward and trailed his tongue along her spine.

Again she whispered against a moan.

And the animal in her took over. The irrevocable love she had for her husband took center stage. Her aura wrapped around him, pulled him under, allowing him to drown in her desire for him.