Battles never cease and sparks fly when Sonora and Connye, two Grand Divas, strategize to best each other in no-holds-barred adventures in social one-upsmanship. But the battles are played out in the most civil of terms. Dinner parties, social events, and outside journeys to Puerto Vallarta, New Orleans, and New York carry the action through the search for buried treasure, battles to control visiting royalty, a Hollywood movie premiere, and the colorful exploits of sexually complex, supporting characters. When a new competitor arrives on the scene, a world-class fashion designer, she actively conspires to claim the crown of “Queen” for herself. But Sonora and Connye may not welcome the challenge to their established supremacy. 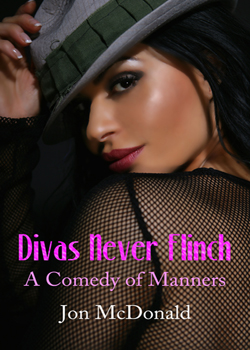 Connye Andreatos was born Connie Thibodaux deep in the swampy bits of Vermillion Parish in southern Louisiana. She could catch and skin a gator by the time she was eight. She had an aunt on her mother’s side that had “the gift.” It was whispered that she could talk with the dead and read people’s minds, and she would wander the swamps late at night doing who knows what all with charms and trinkets. It was not talked about openly in the immediate family, but Connie was fascinated with her and hung around in the background when she visited. When she was old enough to visit her auntie on her own, she would stay weekends and they would talk long into the night about her gift. Connie hoped she, too, might be gifted that way. In any case, she continued to have a deep and abiding interest in all things spiritual and otherworldly. But as she grew older, she felt the stultifying confines of the little town of Dauvin, and as soon as she could put together a couple of hundred bucks from working at the bowling alley in Abbeville she headed off to New Orleans. She thrived in New Orleans. She got a job at the perfume counter at the Bon Ton and went to night school to better herself. If she was to succeed, she would have to sound like a real lady. It was then that Connie changed the spelling of her name to Connye. But it was just the beginning of her transformation. Little Connie of Dauvin, Louisiana, was now married to Mr. Lobster Pot, with one hundred and eighty-two restaurants across the United States and Canada. She cultivated her native smarts and soon became a doyenne of both the social and arts scenes of New Orleans. Kostas could have cared less. He was away most of the time anyway, screwing a nubile waitress or two in one of his far flung Lobster Pots.