With the death of her father, Lenna Keith is trapped between a king’s command and a land hungry guardian. Her luck improves none as she flees and winds up at the mercy of the Gunns, the very clan seeking to destroy her family, but, looking into the eyes of their Laird, her heart rebels at the thought that this man is her adversary.

Alax Gunn is intrigued by this spirited woman but mostly by the fact that she mirrors someone who has haunted him since youth. Curiosity and mistrust turn to attraction and desire, but swiftly she becomes so more to him. What all will he sacrifice to keep Lenna safe and in his arms? Will a love between two destined enemies bring an end to a feud or to two ancient clans of Scotland? 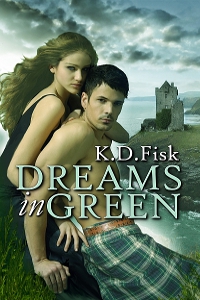 He knew she told a half lie and more to herself than him. He’d heard of her southern cousins. They would be no better than the Sinclairs or any other trying desperately to gain Ackergill without question.

He reached and gently laid his fingers on her arm. “If he wants only alliances, then why haven’t you tried that route?”

He felt her shiver at his touch. “Even if I wanted such a thing, only two Lairds can have a truce. I may be my father’s daughter, but even I cannot legally control my clan’s affairs. Besides, how long do you believe our neighbors would allow such a stronghold as Ackergill to be controlled by a mere woman?”

A quiet crept between them, then ended as she allowed a sigh to come forth. “So, was a warning against me the only reason the MacKays have come to Halberry? That seems far too generous.”

Alax nodded. “Aye, you’re right. There’s not a generous bone in a MacKay. It seems they’ve come in search of you. Edward is surely behind it. They’ll not know of your stay here.”

He watched her eyes rise and slowly come to rest on his face. “Why are you being so good to a Keith, Alaxander Gunn? Aren’t your kind supposed to be blood-thirsty and war-hungry? You seem far too peaceful for such blood to run through your veins.” He found a smile touch his face. “And I thought all Keiths akin to the devil.” Slowly, he passed a hand just over her head. “Yet I see no horns. Are you sure you’re a Keith?”

She actually laughed, a small, weak thing, but a laugh all the same. “I didn’t inherit my father’s horns.” Her smile faded. “Nor my mother’s halo.”

Something hard lodged in his throat. “I’ve heard of your mother, and I’ve heard this hair of yours comes from her.”

Lenna slowly raised her hand to touch a soft curl. She sadly shook her head. “Her hair was like spun gold. My father’s brown locks dimmed mine to dead weeds.”

Dead weeds? Is that how she saw her lovely hair? Who had filled her head with such thoughts? He reached a finger of his own to wrap the wayward curl around.

“Spun gold it may not be, but lively drops of sunshine dance in these depths.”

Her cheeks turned a pretty pink. “Alax Gunn, your tongue should belong to a poet or minstrel.”

He smiled a crooked grin. “No, Lenna, I would be a pitiful poet. I’ve no deceitful tongue to force false flatteries. I speak only simple truths.”

Her pink face darkened to red. The blue and purple bruising had faded in the past two days. He gently cupped her cheek; Lenna’s eyes widened. Those deep blue depths were so like the sea mere yards away. Alax could think of nothing as he grew lost in the waves of her soulful eyes.

Then she blinked and pulled away from his touch. Those pretty eyes narrowed. “Is it not enough you have me in your damn Gunn bed? Must you try your seduction tricks on me?”

She stubbornly raised her chin at his sudden confusion. “Aye, I’ve heard all about your roving ways at court. The Highlands echoed with tails of your conquests both on and off the battlefield.”

Those blasted rumors! He felt heat rise up his neck as his hand fell to his side. He quickly stood.

“What makes you think I’d waste my techniques on a skinny little Keith like you?” He took a step back. “I’ve found what I’ve come for. If you wish to allow everyone to know of your presence here, do continue your banshee imitation.”

He watched her lips part in surprise, but turned before she could say a word.

He halted mid-step, but didn’t turn back. “Aye?”

Her voice was unsure. “I…well. Thank you.”

He turned towards her then. Her hands were clenched together then she separated them, and balled them into fists at her sides.

He nodded. “Your thanks is accepted, but not needed. I’ve brought you here and you are my guest.”