She's about to get the surprise of her life with a man who already turns her world upside down.

Sasha Grey definitely loves her boyfriend but to become his Creator? To bite him and hope his soul can survive the change? She's not so certain about biting him and making him a vampire, but he makes her so hot and bothered, how can she deny him?

Michael turns the game around and brings in two friends who will change the entire dynamic of their relationship and open her eyes to the elusive enigmas known as the Aos Sidhe. 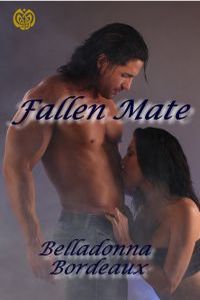 “Okay. Fuck him, drink his blood and live happily ever after.” The plan sounded so easy on paper, but Sasha Grey was having second thoughts.

He brought a different aspect to her life—that human quality ripped from her when she was turned into a vampire a century ago.

Did she love him? That had been his question when he proposed she become his Creator so they could be together forever—or until one of them had the misfortune of being caught in sunlight or staked. Her answer was an unequivocal yes.

How had it happen? How had she fallen fangs over stiletto heels for a mortal? She didn’t have an answer. She supposed he’d broken down her defenses over the course of their six month relationship.

A tap on the window of her luxury sedan brought her around. She immediately hit the button to drop the pane of glass. “Sorry.” The apology tripped from her lips when her gaze collided with Michael’s lush blue stare. “I was….” Twisting the key in the ignition, she blew out a breath. You don’t know what you are asking of me.

“It’s okay.” He reached inside her car and opened the door. The back of his hand overtly brushed her breast on the return journey. “Sasha, if you don’t want to do this, I’ll understand.”

Sure, he’d understand and then he’d dump her for one of her friends. She had at least a dozen friends in the coven of vampires she belonged to who thought Michael was hotter than hell. It was a totally vampire expectation to have him be unfaithful since her kind weren’t known for their monogamy. The mere thought of him fucking one of her friends made her sick to her stomach.

Stop it. She inhaled deeply. “It isn’t that, Michael. If I do this, there is no turning back. At least there isn’t for you.”

He took a step back and held out his hand to her.

A burst of euphoria engulfed her, wrapping her in a warm bubble of bliss. “How do you do that?”

“Do what?” he asked in a teasing tone.