Fifty Seventy is a six-story anthology affirming and exploring the sexual relationships between men when one sex partner is fifty and the other seventy. These six stories are varied in not only time, place, and situation, but also in who is on top and who is on the bottom and how long their relationship has been going on. All, though, share the common thread of a fulfilled sexual relationship among mature men of certain ages. All of these stories are of men still getting pleasure from sex in their later years.

We all grow old—if we’re lucky—and, if we’re honest with ourselves, we wonder if we will be one of the lucky ones one who can still get it up at ninety and enjoy a sex life. All of us who have enjoyed an active sex life wonder, with some sense of concern, how good sex can be at fifty, and whether there can be sex at all at seventy. And these are as much questions in the gay world as the hetero world. Add to that the question of the durability and sexual aspects of May-December relationships or, perhaps even more problematic, October-December relationships, and the concerns can be complex. But the possibilities can be interesting as well. 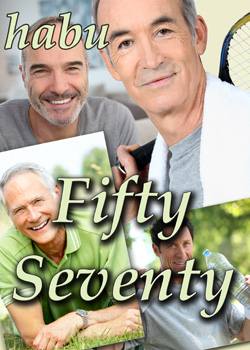 The old man pulled a packet of vibrant-colored cigarettes out of his pocket and was lighting up even as he asked, “Care if I smoke?” He didn’t wait for an answer before going on. “My name is Bob. I trust that you’re a tourist, coming for the first time to our little tropical paradise down here in Key West to . . . observe?”

“Yes, down from Delaware—Wilmington—to escape the winter. Stopped here on my way farther south. My name’s Alex, by the way.”

“The Blue Marlin, just down the street on Simonton. Rather interesting. An old fifties-style motel, but they keep it up and emphasize the retro.”

“Yes, I know it well. So, just retired from DuPont and decided suddenly to see the world? You look a bit young to have retired. More than a bit, actually.”

Was the man leering at him suggestively? Alex chose to ignore any possibility that he was. Still, he felt a tightness inside himself—as if the old man was pulling at him to extract all of his deep, dark secrets. Then why, Alex wondered, was he proceeding to give up nuggets about himself? At the back of his mind, he kept wondering just why it was that he’d wanted to take a side trip to Key West on his way farther south.

“Not retired yet, but you hit it on the head with DuPont. Not DuPont itself, but one of the major banks in town. We do a lot of work with DuPont. I’m fifty—just turned. Looked around and decided I hadn’t done much of what I wanted to do in life. So, I’m on an extended vacation.”

“Ah, yes. Fifty is a dangerous age. I’m seventy myself.”

“I’ve done what I can to keep that from being a first guess. And you got bored up there in Wilmington did you? Made a list of places to see, and Key West was on the list?”

Alex didn’t quite know how to respond to that, but Bob saved him the trouble, continuing on with his probing. “Is Key West the only sightseeing destination on your vacation agenda?”

“This is just a stopover. I’m on my way down to Peru. Wanted to see Machu Picchu. It seems to be on everyone’s bucket list.”

“Ah. Rather unique, a stopover in Key West on the way down to Peru. When you get there, you’re going to do what, take a flyover of the area? You’re not going to climb to the ruins?”

“Yes, yes, a flyover, but how did you guess that?”

“I sense a pattern here. And, so, why did you stop over in Key West? To observe beautiful young men playing volleyball on the beach or to fuck or be fucked?”

“We’re an open and honest lot down here in Key West, Alex, and the key is famous for one thing, really. I just wondered where you were in life. It seems you’ve moved to observer from experiencing. I can understand that. I was in my fifties once, facing retirement, and suddenly realized I hadn’t been much of anywhere. In my rather older age, though, I’ve discovered that it’s all going to abruptly stop at some point—and I will either have collected photographs of others doing something—young men playing volleyball on the beach, for instance—or I’m going to have experienced life myself. That’s why I went back to smoking and drinking . . . and *****. And Key West is a great place to do all that and devil may care.”