Andrea McIntyre is Executive Producer for the Special Projects and Investigative Unit at KRCP-TV. She's used to being in charge, skirting danger, and living on the edge. But when her ex-boyfriend, Dev, is hired, she knows she’s at risk for a very different sort of danger.

Andie can’t stop the memories, both good and bad, from flooding her thoughts and emotions. But she has a better boyfriend now. One who doesn’t try to spank her every time she puts herself at risk. Yet she finds herself yearning for that loss of control and the only man who’d made her feel felt truly safe and loved.

Soon they’re following the trail of a serial criminal, and it’s not only her love life at risk... 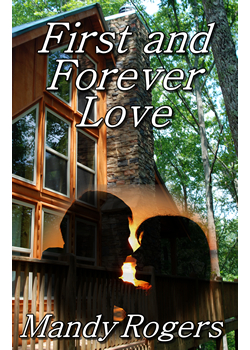 At the sound, Andie jumped slightly and glanced over her shoulder. All she could see was a silhouette leaning against the doorway, because of the backlight from her office and the dimness of the archive closet. With no recognition, she quickly turned her attention back to what she was doing but started talking.
“Welcome to the I-Team, Tony, I’m Andrea McIntyre, and I guess I’m the zookeeper around here. Forgive my back, but I’ve got to find a couple of tapes. I’ll be honest, I haven’t had much of a chance to look over your file, but if John thinks you’ll work out, that’s good enough to get you started.
“Let me give you the rundown of how things work here. I don’t know what you’re used to, but here the producers are in charge, starting with me. You are talent. My producers have the final say on everything from story concept through final scripting and editing. You’ll have two producers you work for. If you have a story idea to pitch, do it through your producers. Once you earn your stripes with them, you’ll get more involved in the story development process. But they do all the undercover work, research, and most of the writing, and you’re just another pretty face until you prove otherwise. There are no egos here, so check yours at the door. If you survive the probation period, you’ll be part of the best damn I-Team in the country. You’ll do the best work of your career, you’ll pick up lots of awards, and if you want to be a network star at the end of your contract – nobody’s gonna stop you.
“But just so you know, only about one out of three people make it through the 120 days – this is a real probation period, and at any time you, or I can decide it’s not working. You’ll hear the team refer to me as D-L on occasion – never to my face, of course – that stands for Dragon Lady, because I’ve been known to breathe fire. It’s no shame not to make it on my team – you’ll still be able to get a job on almost any other I-Team. But we’re a special group, and not everybody fits. We’ll have more time to get acquainted once I get caught up and get this story into editing. So unless you have any questions right now, Jen will show you your desk and you can get settled in. Then check in with Linda Wright and Mark Rico – they’ll give you briefs on the first stories you’ll be fronting.”
Impressive, Dev thought, now let’s see if we can’t ruffle the dragon’s wings. “Nice speech, Andie, now how about coming down off that ladder before you break your neck, and talk to me like a professional colleague, not some item you have to cross off your to-do list,” he said, adding just the right touch of irritation.
That voice... thought Andie, that deep, rumbling broadcast voice only belonged to one man.
“Dev?” She whipped around to look at the man with the voice from her past. But as she turned, her heel caught in the metal step and she lost her balance. She let out a short scream as her ankle twisted painfully before her shoe released its grip on her foot and she fell. Dev took two long strides toward her and caught her before she hit the concrete floor. For an instant, Andie was breathless. Then she looked into Dev’s angry eyes and was taken back to the first time she felt those strong arms around her...