When war breaks out, the Laughing Owl is sent on a mission to discover, if they can, the system of origin of their mysterious rolling adversary.

Dying of boredom while waiting for something to happen, Captain Nicholas Steele and Astrogator Cai are not as discreet about their relationship as they should be and soon the whole ship knows. Certain to face the Guild’s wrath for their actions and dealing with a foe that has turned out to be tougher than they expected, will the pair manage to fly clear of their adversaries long enough to find a solution to the problems besetting them?

Cai tried to ignore the tension on the bridge, though he was certainly aware of how nervous his crew was. He focused on the asteroids around him, rapidly calculating distances and closure rates. The corridor he was in was coming to an end thanks to a mountain-sized rock that was drifting across his vector. Cai eased his bow down with rapid bursts from the forward topside thrusters. He continued this until his new vector had him passing well clear of the belly of the beast. Downward relative to the plane of the ecliptic seemed a good move, for the asteroids thinned the further from the central band he flew.

He gradually accelerated, maneuvering around, over and under the remaining asteroids surrounding him until after an hour of white-knuckle time for the crew, he broke into relatively clear space. The bridge crew heaved a collective sigh of relief at the sight of open void ahead, but Cai was a little disappointed. That had been the most real fun he’d had in weeks.

He quickly plotted a course for the hardpoint the Rel had arrived through, and the moment he had the required momentum built up, he throttled the engines and made like a rock again. Rocks knocked loose from asteroid belts all the time and he’d been careful to set his course on a theoretical outbound ellipse. It should be sufficient to fool any other Rel ships that entered the system while they were in transit. He thought it unlikely, given how long they’d waited to see that one Rel, but he was certain that if he didn’t plan for it, Rels would immediately jump in system from every direction.

Cai let his connection to the ship lapse once he had completed another set of checks designed to show if there were any errors in the first set of checks he’d run. He had fourteen hours to kill before they reached the hardpoint. Wondering if he could talk Nick into another sim, he walked out of the Chamber to be greeted by the delicious aroma of Nick’s lasagna.

His step quickened, leading him to the dining room where a full meal was waiting for him—along with Nick wearing nothing but his birthday suit. 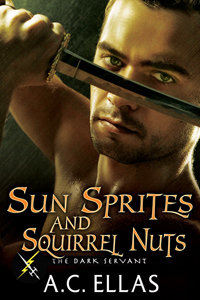 The Owl Initiative
A.C. Ellas
In Shelf
$4.99
Tweets by
sirenbookstrand