Which way is up? Cale Durbin is about to find out.

When Cale Durbin receives a GPS system for his birthday, he tests it out on the drive to meet a blind date. The blasted device gets him lost, but Cale doesn’t mind so much when he ends up at the door of a hunk named Mike who shares many of his interests.

After the date fails, Cale discovers the GPS possesses a unique feature—it leads him right to Mike again! Can true happiness be found through a global positioning device, or is Cale headed in the wrong direction? 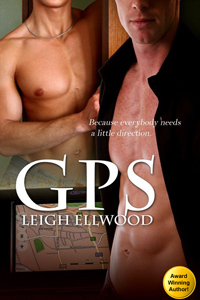 “At five hundred feet, turn left onto Wilshire Avenue.” The device issued a robotic, feminine voice, like HAL from 2001: A Space Odyssey shot up on estrogen. She sounded bored and authoritative, not unlike his mother, but Cale didn’t mind. Miss GPS hardly turned him on. Ryan shouldn’t feel threatened.

Previous excursions to the upscale section of Hill Pointe gave him a vague idea of where to drive, and fifteen minutes into the trek Cale felt secure with the global positioning system’s accuracy. He merged onto the interstate, followed the instructions to exit at the proper off-ramp, and crawled through thick, Friday night traffic. He passed multiple strip malls and shopping centers, hoping to catch a glimpse of Shakey’s familiar neon cowboy hat logo so he wouldn’t have to rely on the device much longer.

“At five hundred feet, turn right onto Phipps Boulevard,” the voice intoned, and Cale complied at the first opportunity.

A fleeting sense of discomfort washed over Cale. The turn seemed to guide him away from the populated commercial area of Hill Pointe, and deeper into residential neighborhoods. Parking lots and foot-high store signs—their height stunted by city ordinance—gave away to gated communities and private tennis courts. Cale consulted the moving map on the small monitor before him and noted the straight line on which the GPS had him driving.

“This can’t be right,” he muttered. After two minutes the darkening sky forced Cal to switch on his headlights and he cursed. The digital clock on his dashboard read 6:55. No matter what he did—turned around, stayed the course, called for help—he would be late.

A quick glance at the rearview mirror revealed no cars behind him, so he slowed down and hugged the curb. He grabbed his phone from the passenger’s seat and dialed for Myra, only to get her voicemail. “Myra, call me as soon as you get this,” he barked. “I’m fucking lost. This is going to cost you two drinks and quite possibly a hotel because I’ll be too drunk to drive.”

Soon as he hung up, though, he realized Myra would gladly comply to that, assuming the date succeeded.

Miss GPS interrupted his anxiety and guided him left onto a residential street. A yellow diamond sign came into focus and Cale sighed heavily on seeing he’d hit a cul de sac.

“You have reached your destination,” the voice sang.

“The fuck I have.” Cale idled between two carports and turned on the dome light. His cell phone didn’t have wireless Web functionality, and Myra had yet to return his call. She hadn’t the foresight, either, to give him Ryan’s number or one for the Hill Pointe Shakey’s. This left him with little recourse but to backtrack to the nearest convenience store and hope somebody there could direct him to the restaurant.

“Some gift you are,” he mumbled, and moved to shift into reverse when a vision filled his side of the windshield.

Lean, bare legs stretched up to a loose pair of jogging shorts, shining in his headlights. A tight, white t-shirt stretched over a broad chest and accentuated chiseled arm muscles. A handsome face, crowned with a thick head of dark hair, studied him with a mixture of confusion and bemusement.

Cale nodded and offered a slight wave. He knew he didn’t belong here, and began to ease the truck backward when the man let go of the garbage he’d pulled to the curb and approached.

Damn. While Cale normally didn’t mind chatting up a cute guy, he figured this one likely didn’t take kindly to a rumbling diesel beast polluting his property. “Yeah, yeah,” he said,

The man motioned for Cale to roll down his window, and Cale met a piercing pair of blue eyes to complete the gorgeous picture before him.