Late at night she calls out a repairman to fix a leak. Trouble is, he wants cash and there’s none in the house. How can she pay? He’s young and fit and moody, and surprisingly hot... maybe she can offer him a big fat tip? To her relief, her offer goes down surprisingly well, until he makes a shocking discovery... 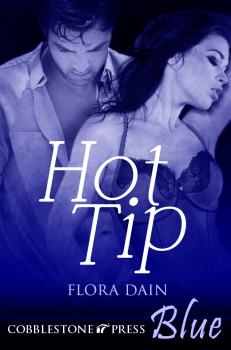 She stared at the phone, her palms sticky. It was well after midnight. Would she even get an answer? Did she have a choice? She was desperate.

Biting her lip, she jabbed at the buttons. It rang over and over. No answer. She frowned. This was a bad idea. She should cut the call...

“Hello?” A man’s voice growled in her ear, gruff with sleep.

“I–uh–there’s a problem with my water tank. It’s sprung a leak. Can you come?”

“What, now? Jeez, lady. You any idea what time it is?” His low snarl sent a shiver though her.

She licked her lips. “I know. I’m sorry. But I don’t know what to do. Please.” Quickly she rattled off her name and address then paused. The signal had cut out. Now what? Should she try again, or would that make him madder? She felt shaky. Stepping carefully past the bathroom door, she slipped into the kitchen to perch on a stool at the breakfast bar and leaned her head on her hands. She’d give him, what, fifteen minutes? Twenty?

At a sudden shift of air in the room, she shot to her feet. “How did you get in here?”

A man leaned on the doorway, hands in his overalls pockets, tool bag slung on one shoulder. His springy brown hair, slightly damp and thrillingly mussed, hinted he’d just left his bed. His sulky scowl hinted he’d sooner have stayed there. His appearance was a shock. Nothing like she’d expected. He looked rugged, masterful, angry. Somehow in control.

He looked her up and down too slowly for comfort. She felt a tingle run down her spine. This was not the cold, impersonal glance of a stranger. He gave off the impression he knew her well, aimed to know her better...

He stood there calm and easy, as if he owned the place. Or owned her. “You said it was urgent.” His low murmur made her tremble. He walked slowly into the kitchen, his eyes still locked on hers. “What seems to be the trouble?”

Her mouth felt dry. She’d never done this before, had no script for this kind of situation. In her day job as store manager she kicked ass, snapped out orders, took decisions. Now she stared up at this overall-clad stranger, for once unsure of herself. He was well built, on the civilized side of hunky and fiercely, achingly attractive. Her kick-ass daytime self turned to mush. She was alone. It was late. She was dressed to kill and she was facing an unexpectedly gorgeous guy. Plus, she sternly reminded herself, this was an emergency.

She opened her mouth to speak, closed it again. “The water tank,” she faltered. “It’s leaking.” Her voice came out squeaky. She cleared her throat, hoping she sounded less nervous than she felt.

“Yeah. You said.” He took a step closer. “Where is it?” His dark eyes drank her in. He scanned slowly down over her tightly clutched short satin robe, paused to take in the deep valley between her breasts where her thin wrap gaped open, then his gaze travelled lower to feast on the black lace stocking-tops peeking out just below her hem. He raised his eyes back up to meet hers, so slowly it seemed an effort.

Mesmerized by the intensity of his gaze, she stood very still as he reached out to touch her. He ran his hand down one side of her face, under the dip of her jaw, and followed the slim column of her neck all the way down to the rising swell of her breast. A tremor ran through her. Her mind raced. Should she tell him to back off? Threaten to call the police? Cry out, at least? Something held her back.

His hand was warm and firm, his touch gentle. The tremor grew stronger, fizzed like electricity. Technically, she had every right to scream. Instead, she gazed up at him, spellbound. Somehow his steady frown of concentration made the moment solemn, turned the dawning wonder in his eyes into a kind of worship.