Heat Rating: Sextreme
Word Count: 27,441
39 Ratings (4.6)
Contemporary Paranormal Shape-shifter Alternative (M/M, Gay)
In Bookshelf
In Cart
In Wish List
Available formats
HTML
ePub
PDF
Mobi
Cover Art by Jess Buffet
Reviews
I knew, before I even started reading this first book in the series, that based on the blurb, I was going to like Keaton, but possibly have some issues with Cameron. I warmed up, a little, to Cam by the end, but essentially, he was way too arrogant, overbearing, and dominant for me. I know, I know. I was surprised, too.

Regardless, I loved the premise of this story. The fact that the bears have been living with a lie all of these years and it’s only when Keaton finds his great-great-great-grandfather’s journals and scroll, that he and his cousins set out to right a wrong in order to find their true ones. 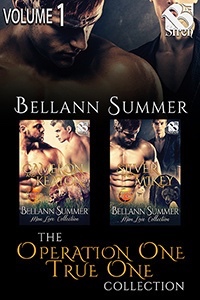 A group of concerned men and women surrounded the red-faced teddy bear. Hands pushed aside shaking fuzzy paws and yanked on the stubborn zipper at the bear’s neck, sending the man stumbling back until a gray-faced ghoul caught him.

Cameron Kodiak had seen enough. Making his way through the crowd of dancing Halloween partiers, Cam used his impressive height and wide muscled form to reach the man he had been watching all evening.

Eyes, large enough to drown in, widened as he drew near. One of the would-be helpers leaned over, blocking Cam’s view before he could see what color the man’s eyes were. Cam suppressed the urge to separate that person’s head from his body.

Leaning down, Cam put his mouth next to the man’s real ear covered in fake fur.

“Turn around,” he ordered.

Cam glared at the crowd surrounding them and caught the man when he would have tipped over in his haste to do as Cam had asked. Satisfaction at the man’s instant response soothed Cam’s irritation. He had no patience for people manhandling someone who had snared and kept his interest throughout the evening. It didn’t matter that they had no knowledge of or that he hadn’t acted on that interest. Cam had staked his claim and the others better back off.

A quick jerk tore the zipper free from the snagging plastic hair. Cam opened the man’s costume revealing a tight T-shirt and painted on jeans. He didn’t bother to resist skimming his fingertips over the sweet curve of the man’s lower back or the round globes of his ass. Nice.

“Keaton, are you okay? I told you that costume would be too hot to dance in.”

A skinny dark-haired man dressed in a French maid’s costume stood in front of Cam, shifting his weight from one high-heeled, delicate black sandal to the other. Giving the newcomer a deliberate message, Cam put his arm across the man’s fur-covered chest and pulled him back into the protection of his body.

“Whoa.” The man stepped back and raised his hands, one still holding a fluffy duster. “I see you’ve met someone. Damn, how do you always find big, bad, and gorgeous?” The man shook his head and the little white maid’s hat tilted at an odd angle. “I don’t think you’ll be needing it, but let me know if you need a ride home, Keaton.”

The man in Cam’s arms moved. Cam tightened his hold and the one called, Keaton, settled down. The instant compliance mollified Cam’s building annoyance at the interruptions of getting to know the man.

The crowd around them disbursed, and the man in the maid’s costume disappeared into the mass of dancing bodies, leaving him alone with the little bear in his arms. Cam suppressed a chuckle. He wondered how this Keaton would handle the knowledge that a real bear held him.

Cam tugged the costume down Keaton’s legs and left the red fur lying in a puddle on the floor. Amusement at the sight of the Keaton’s slim bare feet curved Cam’s lips into a rare smile. If Cam had his way, he would keep as much of Keaton’s body uncovered as possible.

The small man turned and placed his hand in Cam’s.

In the glow from a beer sign hanging near their heads, Cam met a gaze made of ice blue. Never before had he encountered eyes of that color. His bear roared, and his guts cramped into knots.

Keaton Johnston watched Cameron Martin Kodiak ground his teeth together and wince. Could it be that the huge man’s insides were feeling as if vice grips were clamping down on them? Would he turn caveman and claim Keaton? Could the legends of the bear people and the stories of his family be true?

The need to give this man his complete submission was something new. Keaton had never felt that way before. Was he the first of his cousins to be successful in their search for true happiness? Prickles of hope and anticipation race over Keaton’s skin.

Leaving his costume abandoned on the floor, Keaton let the big man lead him toward the bar area.

Cameron lifted his hand and the bartender set two open beers on the bar. Keaton took a quick drink of the one Cameron handed him trying to calm his nerves. If he didn’t somehow know it would enrage the man before him, Keaton would have taken out his phone and texted his cousins. If Cameron wasn’t his, he may be one of theirs. Yeah, that left a bitter taste in his mouth. Keaton wanted this one.

A large, deeply tanned, muscled arm, reached across Keaton and rested on the bar, trapping him in the circle of Cameron’s big body. Keaton suppressed the urge to run his fingertips through the dark hairs covering that arm.

“Keaton Johnston,” he answered, unable to not answer, which was weird.

A finger under Keaton’s chin forced him to look up.

“I’m Cam Kodiak,” the big man stated. “I own this bar, and I want to be more than your friend.”

“Okay,” Keaton responded and hoped his heart wasn’t about to explode. The guy was so gorgeous, he yearned to press up against him, and stay there forever.

A hand clamped onto Keaton’s ass and another landed on his shoulder. “Hey Cam, who’s this sweet thing you’ve got there? Do you want to party together? I’m up for it.”

Before Keaton could turn and see who was manhandling him, Cam roared and all hell proceeded to break loose.

“I have questions.” Cam grabbed a fist full of Keaton’s hair, not letting the man look away. “And I expect the entire truth in your answers.”

“I will always tell you the truth,” Keaton stated.

Cam wondered if it were possible to drown in wide, light blue ice colored eyes. Fire swept through his system when the man’s tongue peeked out and wet his bottom lip. Keaton’s musky scent of need prodded at Cam, demanding satisfaction. Any questions were pushed aside as desire exploded to the surface. Man and predator collided, ready to mate with their soul’s other half.

Keaton’s clothes disintegrated to shreds under Cam’s sharp claws. Cam turned and followed his mate’s smaller smooth body down onto the bed.

Instincts as old as time took over. Cam rubbed his cheek against Keaton’s face and down his neck. He continued over Keaton’s chest to his concaved belly, pausing at his groin, rubbing over the satin skin of his mate’s dick and the course hair covering his ball sac, until the small man trembled and moaned. Cam brushed his cheek over the fine hairs covering Keaton’s leg down to his toes.

Shifting, Cam made his way up Keaton’s other leg.

“The scroll was right,” Keaton’s whisper broke the silence. “Bears need to rub their scent over their true one.”

Not bothering to answer, Cam rubbed his cheek over Keaton’s shoulder and down his arm to his fingers, before doing the same to the remaining arm. Flipping the man over, he enjoyed the slim planes of Keaton’s back and round globes of the man’s ass. There would be no mistakes or temptations of poaching on what was his. Death would be the answer to whoever had that misguided thought.

Laying down onto his back, Cam ordered, “Suck my cock. Bring me pleasure.”

Keaton never hesitated and climbed onto his knees. His small hand encircled the base of Cam’s prick, lifting the already heavy flesh up, and putting the round spongy head to his lips. Satisfaction simmered as he watched his mate’s mouth stretch wide around his cockhead. Not to be deterred by the thickness, Keaton began licking and sucking Cam’s shaft. Cam shivered, the pleasure his mate was giving him made his cock iron hard.

Keaton raised his head to catch his breath, and pre-cum dribbled down the side of Cam’s cock. The smaller man swiped up a few thick droplets and popped it into his mouth.

Keaton smiled and licked his lips. “You taste so good.”

In one move Cam had Keaton on his back. Surging up onto his knees he grabbed his cock in a firm hold and began to jack off. Cam didn’t know where these primal urges came from, but nothing would stop him from carrying them out. Pre-cum began pouring out the tip and Cam used his cock as a wand to spread the wetness over Keaton’s body.

Once lines of pre-cum covered Keaton to Cam’s satisfaction, he began spreading the clear stickiness into Keaton’s skin. He added more pre-cum onto Keaton’s stomach until the small man’s flat belly glistened with wetness. His bear roared in approval.

“It feels like fire,” Keaton whispered. “Deep inside it’s burning.”

His gorgeous mate’s flushed face and half-closed eyes urged Cam to keep following these instincts that were bombarding his soul. That was what Keaton was, Cam’s mate, and they were destined to be together whether the lies were real or not.

Some of the things Cam had overheard Keaton’s cousins talk about were true of his family.

When a bear was ready to have children, most settled with someone they could exist with, in a somewhat calm state. Relationships with volatile, unbending bears were never easy or peaceful. Great love affairs were few and far between. A child born of a male hadn’t happened in centuries.

Cam’s gaze lingered on his lovely mate’s lips, swollen from the strain of attending to the girth of his cock. From this day forward, Cam vowed to keep Keaton’s lips stained red from his need.

“If another ever touches you, they will die and you will want to,” Cam promised.

“Only you. Please, I need you,” Keaton whispered.

A surge of lust sent another jet of pre-cum from Cam’s cock, painting a streak across Keaton’s thigh. The clear stickiness dripped down over the hated purple crescent birthmark.

Cam never did anything he didn’t want to do. Everything in his being rejected that mark. And yet, his hand reached out. Cam’s willpower screamed in protest as he watched his fingers spread pre-cum over the discolored skin.

“Look at that,” Keaton whispered. “They were right.”

Cam didn’t know who they were, but before him, orange spread over the purple crescent until it formed a round circle.

Heat gushed over Cam’s body in endless waves. In his ears, the great drums of tribal leaders in ancient times drowned out all warnings of danger and catastrophe. The Kodiak raked his claws over Cam’s insides demanding he claim his mate once and for all.

Cam rolled them over until he was on his back with Keaton above him.