Ruby had no idea what to expect from her trip toBudapest, but a strange man in her bed on her first night probably wasn’t it. Once the mistake is ironed out, though, and introductions made, she finds herself strangely drawn to the handsome Hungarian, despite her vow of holiday celibacy. Does Janos have what it takes to break her resolve and discover the secrets she is hiding, or will she be able to resist his increasingly wild seduction tactics? Against the romantic backdrop of a city made for lovers, personalities clash. They also bump. And grind.

Marnie Lewis is certain that one of her friends – handsome but awkward Brandon– hates her guts. The last thing she wants to do is go on a luscious weekend away with him and a few other buddies, to a cabin in the woods. But when she catches Brandondoing something very dirty after a night spent listening to her relate some of her sexcapades to everyone, she can’t resist pushing his buttons a little harder. He might seem like a prude, but Marnie suspects he likes a little dirty talk. And Marnie has no problems inciting his long dormant desires.

If there is a paving stone to trip over, or a drink to knock over, then Sally Briers will trip over it or spill it. Yet somehow Sally is the successful face of marketing for a major pharmaceutical company; much to the disbelief of her new boss, Cameron James.

Forced to work together on a week-long conference in anOxfordhotel, Sally is dreading spending so much time with arrogant new boy Cameron, whose presence somehow makes her even clumsier than usual.

Cameron, on the other hand, just hopes he’ll be able to stay professional, and keep his irrational desire to lick up all the accidentally split food and drink that is permanently to be found down Sally’s temptingly curvy body, all to himself. 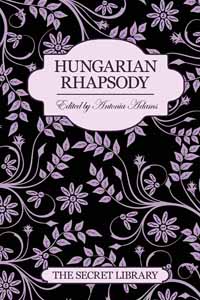 I cant actually say which story was my favourite as they were all brilliantly written and each being so completely different from one another. But seriously all three novellas were expertly put together with their addictive reads.

Without turning around he said, ‘You like what you see?’

I suppressed my yelp of alarm at having been perceived and tried to retrieve the situation. ‘Scrambled eggs, yeah, lovely.’

‘I’m not … nothing of the kind,’ I protested, but it sounded too lame to continue with. Instead, I sidled up to the counter and peered into the bowl. ‘What’s this?’

‘Lecsó,’ he said, but I was none the wiser, so he explained. ‘We like for breakfast. Onions, peppers, tomatoes, cook with sugar and salt and paprika until they are soft. Then we put with eggs, right?’

‘Thanks. You sit down. I bring coffee.’

He slid the bowl and a tiny cup of super strength coffee under my nose once I was ensconced at the kitchen table, then he joined me opposite.

‘Healthier than a fry-up,’ I commented, sampling the fare. It was delicious. He was a good cook. I eyed him, all rumpled and tattooed and sinewy and handsome over there. I’d pre-emptively kicked him out of bed. How strange of me.

I reminded myself that he was arrogant and entitled. And, what was that other thing? Oh yeah. I was on the rebound. Big style. Stay away, Ruby.

‘But there isn’t an ounce of fat on you,’ I said before I could help myself.

‘Ounce?’ But he had understood me, if that devilish smirk was any evidence.

‘You don’t look fat,’ I blethered on.

I’d played right into his hands, it was clear.

‘I just meant that you look healthy.’

He leant forward on one elbow, his head low, eyes fixed on mine. ‘I’m healthy,’ he said. ‘You’re healthy. We can be healthy together.’

Whatever he meant by that, it sounded filthy. I guessed he wasn’t offering to introduce me to his gym.

‘Ah … I came here for some alone time,’ I told him, hoping it sounded more convincing to him than it did for me. ‘Time to think.’

He put out a hand and I froze, unable to move, as he brushed a damp curl from my forehead. I hadn’t been able to blow dry my hair, forgetting that Hungarian sockets were different.

‘Your eyes they are sad,’ he said. ‘You have sad thoughts.’

To my horror, my throat closed over the food it had just swallowed and my eyes filled with tears.

‘Hey now.’ János was up and around the table in a flash, crouching by my side, sliding an arm around my shoulder, pulling my face against his neck. ‘Hey.’

He felt warm and reassuring, his bare skin with its peppering of hairs bathing me in a strange lulling calm. I squeezed out the stupid tears then let myself be held a few moments longer before muttering, ‘I’m OK,’ into his neck.

I made a sound that was half-laugh half-sniff. ‘No, it’s nice.’

‘Like me. I am very nice man. I don’t let sadness happen in my apartment. So you have to be happy, right? What Jodie says – cheer-up-it-might-never-happen.’

He recited it like a mantra and I giggled to hear the words in his dark, Dracula-esque accent.

He kept a hand on my shoulder. ‘I don’t know. You want to tell your friend János why you are sad?’

He shrugged and stood up again, patting my shoulder on the way to his full height.

‘Mysterious Ruby,’ he said, wandering over to the french window and flinging it open to stand on the small balcony. ‘Beautiful day,’ he said. ‘It’s a day for the pool.’

I thought it was a day for staring at the ceiling and getting my head together, but I didn’t comment.

‘What you think, Ruby? You come to the pool with me? Or you want I show you all tourist attractions ofBudapest. How long you are staying?’

He turned around, the early morning blue sky and golden sun surrounding his outline.

‘You stay as long as you are happy,’ he said. ‘I have one condition.’

‘Oh?’ I waited to be sexually blackmailed.

‘You come to the pool with me today. You need to feel the sun.’

I leant back on the table, considering this. If I didn’t go to the pool with him, I’d just mope about here brooding and obsessing about stuff. The pool might be nice. Plus, I had to admit I was a bit nervous of spending time in a city so foreign, where I didn’t speak a single syllable of the language. A companion would be a boon. He could teach me a few conversational basics and how to get around.

‘Cool.’ He mopped an upward hand through his forest of hair and smiled so that his moustache lifted. ‘You get your things and we go.’

On the yellow tram curving and jangling through the elegant city streets, I asked János about his life.

‘I do things,’ he said vaguely. ‘I have property. I start many businesses but Hungarian economy is bad, you know?’

‘I’d heard. What kind of businesses?’

‘I start a bar, but it fail. Then a restaurant. I think of new ideas, good ideas, but is hard in this city – there is so much rules and paperworks. I want to build stuff, make things good forBudapest.’

‘Budapest is very beautiful,’ I commented, looking out of the window at the Parisian-style boulevards and grandiose architecture. ‘Have you always lived here?’

‘Of course. I can’t live nowhere else. You are fromLondon, like Jodie?’

‘And you run away toBudapest.’

I pursed my lips. He had that right. But he didn’t have a right to know. I was saved by the tram bell, as it glided to a halt at the gates of a vast and lushly green park.

‘The pool is in the park?’ I asked, following János into the green oasis. ‘Is it outdoors?’

‘Indoors and outdoors,’ he said. ‘It’s a spa. Water is always warm, even people go there in the snow.’

‘Sounds brilliant! We don’t have many outdoor pools inEngland.’

‘In Hungary, they are everywhere.’ He smiled down at me and pointed at an amazing building over to the right, like a child’s version of a fairy tale castle. A child whose favourite colour was yellow.