What happens when friendship turns into love?

Emma Whitten and Noah Jordan are high school teachers and best friends. Emma is about to leave for graduate school in England, wanting to assert her independence after a nasty break-up with her longtime boyfriend.

Noah, a math nerd, has been in love with Emma for quite some time, but keeps his feelings hidden, believing that she sees him as just a buddy. But after an afternoon of friendship slips into an evening of passion, Emma begins to see geeky Noah in a new light, and Noah begins to believe that they can be more than just friends.

Will Emma choose to move to England as planned, or acknowledge her growing feelings for Noah and find the will to stay? 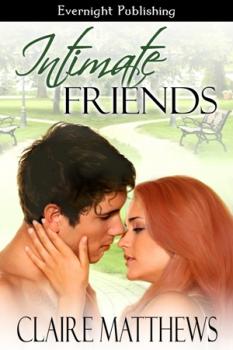 Emma wandered to the kitchen, mixed another heavy-handed drink, and was searching blindly for the TV remote between the couch cushions when the doorbell rang. Still wrapped in her musings over Greg, marriage, Melinda’s breasts, and the beautiful elixir that was gin and tonic, she was momentarily flustered. What the hell? Who would—

Noah. She’d completely forgotten that he was coming over. She made a loopy walk to the door and pulled it open with a jerk. She grinned at him, relieved to see a friendly face, desperate to free herself from her spiralling thoughts.

“Noah! C’min,” she cried, taking another hearty sip of her gin and tonic, wondering why her tongue suddenly felt so swollen. Noah eyed her warily.

“Whoa, are you okay? What are you drinking?” he asked, taking the glass from her hand and sniffing it. His eyes widened. “Is this straight gin?” He took a cautious sip, and his face twisted into a comical grimace. “Oh God, that’s like paint thinner, Emma. Are you okay, did something happen?” His eyes were sweet and concerned, and for some reason they held her gaze for longer than they should have. It was the damn eyelashes.

“I’m fine, fine, jus’ felt like havin’ a little drinky-drink before dinner.” She grinned. He still looked worried as they walked towards the kitchen, and he unpacked the groceries he’d brought while she sat on the edge of the counter, her legs swinging rhythmically, bumping her heels against the cabinets underneath.

“What made you decide to propose to Jenny?” she asked suddenly. Noah stopped short, and looking at her with piercing eyes.

“Just curious. I mean, what makes a man fall so deeply in love that he proposes marriage? Is there a moment when he knows it’s time? Did you just think to yourself one day, ‘Man, that Jenny Dawson, she may be a bossypants, but she’s the one I want to share my life with, have sex with, make babies with, until the day I die.’ Or was it more gradual than that?”

“I proposed to Jenny because she told me to,” he said evenly. “I did everything she told me to do. It was kind of an issue in our marriage,” he said dryly. “Why the sudden interest in proposals?” She shrugged her shoulders, looked down at her lap. “Just tell me, Em, I know something’s up.”

She sighed, and her legs stopped swinging. “I saw Greg and his skank at Village Coffee this afternoon. She was sporting two enormous fake boobs, and one enormous engagement ring.”

Noah’s mouth made a perfect circle, and he executed a silent “ooohh”. His eyes were sympathetic, and she found herself instantly defensive.

“And I’m not jealous. And I’m not still in love with him. Okay?” She stared at him defiantly, her chin set hard.

“Okay, then why are you so upset?”

“What makes you think I’m upset?” she scoffed.

“Oh, I don’t know, maybe the fact that you’re boozin’ it up at five o’clock on a Sunday afternoon?” He grinned a bit to take the bite out of his words. She sighed again, and dropped her gaze back to her knees.

“I’m just—” She paused, taking another sip of her drink. “I’m just…wondering if there’s anyone out there who will ever love me enough to—" She was mortified to find that tears were blurring her vision, and her throat was dangerously tight.

“Emma,” he whispered, moving slowly toward her.

“Ugh, please don’t.” She half laughed, half sobbed, jumping down from the counter and turning her back to him. “God, could I be more pathetic? Just forget I said anything. Let’s make dinner.” She opened the refrigerator, but he moved behind her and closed it with an arm over her shoulder. Then he spun her around to face him.

“Let’s get one thing straight first,” he said, his voice low and gentle, his breath soft against her face. “You are a beautiful, amazing, sexy woman. Any man would be lucky to have you.” His glasses slid down his nose, and before he could push them back up, Emma pulled them from his face and set them on the countertop, their eyes still locked. And suddenly Noah wasn’t her geeky best friend at all, but a man whose eyes trapped her, whose smell intoxicated her, whose full lips made tingly shivers run down her spine. She leaned forward slightly, and he froze, his eyes flashing with sudden comprehension.

“Emma, wait—“ But her lips cut him off, and then they were kissing. Or rather, she was kissing, and he was backing away, until he hit the wall behind them, and grabbed her upper arms, separating their bodies.

“Em, you’re drunk…” he warned, in a low, quivering voice.

“Not that drunk.” She reached for him again, and he scooted to his side, avoiding her arms.

Ouch. “Umm, okay…I’m sorry. I guess this kind of shoots holes your theory about me being sexy,” she murmured, crossing her arms awkwardly over her chest. “But you’re right, of course. I mean, this is crazy. I—“

Noah grabbed her, dragged her up against his firm chest, and proceeded to kiss her so thoroughly that she decided all previous kisses in her life had been silly, sloppy efforts, lost in the shadow of his mind-numbing worship of her mouth. Her entire body shot to life, pulse quickening, nerve-endings humming, fingers rising and anchoring in his soft curls.

She moaned, and he shifted, and then she was fumbling with his shirt, and he was fumbling with hers, and then their bodies were touching, skin to skin, and she had never, ever, been so turned on in her life. The fact that this was Noah turning her on, leaning to tongue her nipple through the slick silk of her bra, clutching her hips and pressing his arousal firmly against her, was too surreal to even think about. So she didn’t.

"Emma...you feel so good," he groaned into her mouth. She let out a tiny whimper in response, unable to speak. His hands moved slowly up her sides, and her body melted into his. He slid his hands around her and lifted her in his arms, still kissing her, hard and wet. Her legs wrapped around him instinctively, and she realized that this position made up for their height difference, allowing her hips to fit squarely over his. The both seemed to recognize this new friction at the same moment, as he tore his lips from hers and attacked her neck, spreading hot kisses over her collarbone as her head arched back sharply.

His feet started to move beneath them, and then they stopped. Then started and stopped again. Emma's head lifted to see his brow furrowed, his face unsure.

"Bedroom," she gasped, kissing the worried wrinkles from his forehead. So he carried her to the bedroom.