Whoever thought a glass slipper would change my life?

When the prince showed up at our doorstep with a glass slipper in hand, my life was turned upside down. My sister got prince charming and I was stuck being the witch in the story. As my sister’s wedding approached, I was ripped from my beloved forest to help her with the upcoming nuptials. With boredom setting in, I was rescued from my ennui by my knight, Shale.

Shale whisked me away into the Dark Wood where I had to face the fae. It only got worse because when I returned, the king fell dead, Shale disappeared, and everyone blamed me. I ran from the palace back into fae to give up my magic. But I couldn't ignore the power forever, because something was brewing between the fae and the real world. When I ventured out to see what it was, I found myself caught in a war between my sister and the fairies. Things weren't going so well and I was the only one who could stop it. And all I wanted to do was live happily ever after with my knight in shining armor. 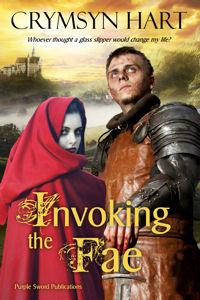 “You think the women in the garden had eyes for me?” Shale asked, pulling me back from my thoughts about the old woman.

“It was obvious they did. My sister was furious because you didn’t come for her. Her queen bitch side has emerged because she’s getting all the attention. Amelia—”

Shale nodded, but put his fingers under my chin. Once he did that, all thought ceased. I watched the slight flare of his nostrils as he breathed and how his lips parted when he drew his tongue across his bottom lip. I wanted more than anything to be his tongue at that instance. Hell, even his lips. “Enough about your sister. How about you? Fen said you needed a way out and sent me. Were the castle walls so confining?”

I nodded and tore my gaze from his lips, feeling the burn creep up into my cheeks. I tried to pull away, but Shale held me in his grip even though it was a light one. “I couldn’t breathe. We were always being watched. I can’t use magic in case they accuse me of being a witch. That’s all I need. The men woo me because I’m Amelia’s sister. I can’t win. I guess I panicked and asked for help.”

“I got you away from the castle. I think that means you should show me your appreciation.”

“Kiss me with those beautiful lips.”

Before he could finish his sentence, I had already pressed my lips to his. The first thing that I tasted was cloves. He returned the kiss with a hunger I had not expected since we did not really know one another, but it seemed he returned my infatuation. Shale slipped his fingers through my hair, tugging at the jeweled combs. He found one and pulled it part way out until it got caught up in the tendrils. I had to work it completely out and then I undid the other, letting the heaviness of my hair fall over my shoulders. I thrust my tongue into his mouth meeting his. We touched and explored while he deepened the kiss, meeting my mouth until our lips were slick and swollen. I trailed my fingers along his face. The skin was smooth and not spattered with stubble. His cheekbones were strong and his hair soft. Shale leaned in closer, putting more weight against me.

And then the world tipped.

My back hit the ground and a pain jarred me from Shale’s lips. His body settled on top of me. It was comfortable as we both realized what had happened. I laughed. Shale followed until he rolled off me and he scooped me up in his arms. I rested my head on his chest, listening to the steady beat of his heart. It was nice to lay there and have everything stop. All was right in the world. There was no need for magic. There was no need for me to fight with my sister. There was no need for anything else than just being there with Shale. He turned over and ran his finger along my cheek. “I need to get you back. Don’t want your sister sending out the guard.”

“They wouldn’t be able to find us anyway. We’re deep in the dark forest where they are too scared to venture.”

“You are so gorgeous. Has anyone ever told you before?”

“A few. All of them wanted to have a tumble.”

I gritted my teeth. “A few. Are you calling me a whore?”

He shook his head and protested. “No. That’s not what I meant.”

“Then say what’s on your mind before I turn you into a tree.”

“Why not a toad? I thought witches transformed people into toads. Then someone would have to kiss me so I’d be human once more.”

Some of my anger dissipated when he smiled. He slid his hand over mine. That soft caress turned my heart into a warm lump. “Yes, but when he was kissed, the girl discovered he was a prince underneath all the warts.”

“Who says I’m not?” Shale captured my lips long enough that I got another taste of him, but not long enough to quench my desire.

He pulled away and got up, offering me his hand.

“I wouldn’t really turn you into a tree,” I admitted. “Fen would kill me.” 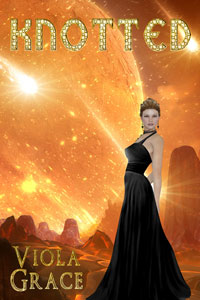