More From Shades of Wolf

Kris and Liam each had an arm around her with a hand shoved into her back pockets. She had considered dressing in something nicer for the inquisition, but had feared that she would come off as trying to be fashionable. Fashion was not a big issue on the clan property and it was best not to stand out. Demetri was walking beside Kris, which showed his place as low man in the pack. Liam outranked him only because he was Kris’s brother, but the unspoken arrangement had no real meaning when they were at home. They held an equal place in her life and Ever verified this with her words and actions.

She was tired, having been unable to go back to sleep after Avia’s dream. The children had still been sleeping when they left, but Daisy was there and she would look after them. As they walked into the clearing, Ever cringed at the amount of people gathered. If she was figuring correctly, over a quarter of those who lived on the property were sitting on blankets before the podium.

Charity waved to her and Ever was captured in the gaze of her son Chirrot. Chirrot had made no bones about the fact that he desired her and Ever had had a few uncomfortable dreams about him. The boy was blond and downright hunky. From what she had learned after their occasional chats, he was also intelligent, well spoken and brazenly funny.

All conversation seemed to cease as they walked through the open path down the center. A chair had been placed sideways to the council and her chair that normally stood beside Kris’s had been removed. For this particular event, and she now thought of it as an event, there were two chairs for Demetri and Liam, but they had been placed on the ground.

Kris slid his hand from her pocket and offered his hand in a gentlemanly gesture as he stepped up onto the platform. Ever took her seat and he took his. “I believe that we all know why we are here. My mate, Ever Wilson, has been accused of attacking the elder Willis Parth.” Kris stopped to look around at those gathered for a reaction. “A little known fact about my mate is that she has the ability to allow us, her mates, to see events directly from her mind. Unlike the Parth family, my family considers a woman to be an equal part in a relationship with the same rights as her men. The event as Ever showed it to us last night was quite different than what was described to me by Nothan Parth.”

Helezon, the head of the council, stood and nodded in respect to Ever. “I have heard your version through Kris on the phone last night. I would prefer it if you could rise and tell everyone here what happened in your own words. I’m also quite interested to see if you can make me see this event myself, if you would be so kind as to try?”

Ever stood and walked over to him. She held her hands out slowly and put them softly to Helezon’s cheeks, closing her eyes. When she had first tried to do this with her men, it had given them a headache and she was careful to monitor her power push  as she allowed the memory to flow through her mind. Helezon tensed against her palms and she immediately pulled back. He was staring wide eyed at her. “That was truly amazing.”

Ever gave him a worried smile. “Just to let you know, I block any input from your mind, so you don’t have to worry that I now know your darkest secrets.”

“I hadn’t even thought about that, but thank you for the information. I’m sure that I will sleep better tonight for it. Can you please now speak what you showed me to those gathered?”

Ever turned and faced the people on the ground. A sea of blank faces stared back at her and she had to wonder why none of them had something better to do. She concentrated on sending out feelings of trust and belief as she told her side of the story. It wouldn’t affect their thinking if they truly thought she was lying, but she figured it couldn’t hurt. Once she had finished, Helezon called Nothan and Willis Parth to the podium. The two men approached, glaring at Ever as if she was the devil herself.

Willis turned furious yellow eyes to her. “This evil half-breed bitch is a liar. She came to my house threatening my family after I refused to let her waste the clan’s money to put one of those toxic underground houses on my land. She turned first when I came down the stairs to escort her back to her car. If it hadn’t been for my sons coming outside, I’m sure that she would have tried to kill me. She wouldn’t have succeeded, but considering that she is a witch, maybe she would have gotten in a few bites before I tore her apart.”

Ever was holding her temper in check. It would do no good to react to his insinuations in front of those gathered. Willis turned to the council. “I say we settle this as it should be settled in open forum.”

Open forum? Wasn’t that where two wolves went to battle against one another? Did she really want to turn and get into a fight with him?

Demetri escorted them to the very back of the shop, taking them down a hallway with a co-ed bath to the right and storage on the left. At the very end of the hall, a central door opened up into a large room. He showed them in and then threw the bolt lock. Spinning Ever around with his hand to her shoulder, he dragged her to his chest and kissed her, crushing her lips with his lust. His tongue became a snake, lashing and licking her inner mouth in a way that took her breath away. His hand slid down her arms, around to her back and he tugged her shirt up over her head. Someone unclipped her bra, reaching around her from the back to unbutton her jean shorts and tug them down.

It felt amazing to be attacked as they were doing, stripping her, kissing her mouth, her skin, hands reaching around to cuddle her breast as the man’s chest molded into her spine. It was Kris, she could feel the heat of his body, smell his alpha-male scent. It was musky and alluring. The smell of him made her sinuses tingle and her pussy throb with desire. Oh how she wanted this, needed this. Ever became soft chocolate in their arms, pliable, game for whatever they had in mind for her.

Demetri nipped her nose, Kris’s hands rubbing and massaging her breast as he rolled her nipples between his fingers. She shivered at the brush of hair against her thighs. Liam had crawled between his brother’s legs and the first touch of his finger to her now pulsing cunt was euphoria. He pushed the outer skin back, holding it taut as he began to lick at her aching clit.

She could feel the swell of wet heat, her little mountain swelling and bubbling with lava that now coated the inside of her. His tongue was wet and hard, stroking and lapping circles over her skin, brushes of moisture sliding over her sweet spot.

Kris kissed the back of her neck, down her shoulder. Demetri rained kisses down her throat, sucking at her nipple as Kris’s strong palm held her for the taking. Demetri’s hands were on her stomach, rubbing and caressing her skin, Liam licking and sucking as he breached her with his fingers. He had such strong and elegant fingers. They stroked and surged in and out of her pussy, enthralling her with the feel of his touch. There was magic in Demetri’s mouth, his tongue seeming to cascade with electric pulses as he pushed it into her nipple. Releasing her flesh, Kris kissed down the line of her spine. He nipped at the cheek of her ass and then slapped the skin, leaving a stinging handprint behind. Ever jumped, whimpering as her body was crushed against Demetri’s.

She moved her hands to his shirt, tugging it upward and off. Ever threw it on the floor and then unzipped his jeans, pushing them from his hips. Liam shook his head, his tongue lashing back and forth as the sensation of his hair wafting against her skin claimed her attention. Then he was gone, leaving her body screaming for attention, her volcano ready to erupt, smoldering heat making her moan with desire.

Demetri shrugged off his jeans, leaving them in a heap on the floor as he walked her across the room. He made a gesture with his hand and then turned, holding her tight to his body as he sat down on the desk. He laid back and Kris lifted her up onto the wood surface, her knees bending as she straddled Demetri. With her hand, she reached between her thighs and grasped his cock, stroking it firmly as Kris smeared something into her ass. It was wet and slippery, probably some kind of oil.

The dick in her hand responded easily and Ever claimed it, her cunt absorbing the warmth slowly relishing it Kris stepped in closer to her, pushing her upper body down into Demetri as his cock delved into the depths of her tight ass. It was a magical sensation, the two men filling every tiny space within her, moving, swaying against nerves that were eager to be stroked, coerced into a frenzy of throbbing bliss.

Kris dragged her back into his chest, his palms returning to her breasts as Liam leapt up onto the desk, straddling Demetri and offering his semierect dick to her mouth. Ever accepted, sucking him between her lips, deeper into her throat, before she began to rock her head forward and back.

It became a rhythm between them, Demetri pushing upward as Kris slid back, her head bobbing as her inner volcano bubbled and boiled.

Love on an Owl's Wing
Charlie Richards
In Shelf
$3.99 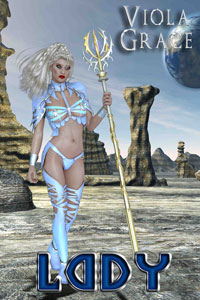