His short blond hair. His shimmering emerald eyes. Indeed, everything about him made Tom want more, but he was forbidden. Tom wanted Jake and was determined to please every inch of his body. If the higher officers found out, they would be discharged and lose all benefits they'd worked so hard to get. But even an archaic system couldn’t bind their love.

In time, they would become one, even if the law said it wasn’t so, and they would come to the rescue of a child who needed them. Despite the odds, they fought side by side and made something of the world they were cast into. They would never give up, never surrender. They would be Janie’s heroes. 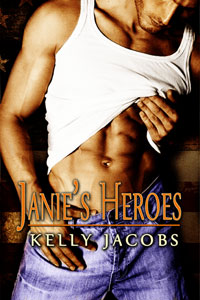 Tom lowered himself, listening to Jake skip breaths, and tried to remain calm as he focused his attention. Jake’s heart fluttered with anticipation and every muscle in his taut body tensed lightly as Tom finally found the long, warm shaft. A gentle flick of Tom’s tongue gave Jake the knowledge that there was no turning back now. Tom had awoken the beast within Jake, and he was going to have to soothe it.

Tom was on his knee, looking at the askew fabric that covered his lover’s manhood. Gently, he tugged the waistband of the soft pajamas down and exposed the raw, hard cock he craved.With a flick of Tom’s tongue, Jake let out a hard groan of primal desire. The flames of his love roared in his heart and set his mind ablaze.

After a couple of laps with his tongue, Tom threw tender care and gentleness to the wind and attacked the beast within, taming Jake and mastering his body.

Tom loosely pursed his lips around the tip of Jake’s warm flesh and inhaled. The cool air passed over Jake and made him quiver with want for release from the torment of passion. Tom appeased him and wrapped his soft lips around Jake’s bulk. He let out a small groan of content wonder as the flavor cascaded over his moist tongue.

With harsh draws on his lover’s thick, solid erection, Tom made Jake weak in the knees and he began to buckle under the pure rapture. Instinctively, but with a gentle touch, he cupped Jake’s package and slowly worked and massaged him, tenderly fondling the sensitive jewels.

Jake’s hard shoulders relaxed and he stuttered out a sigh of relief. Tom drew harder and his tongue shot upwards, the wet, hot bedding cradling Jake’s bulk. Tom’s head began to rock back and forth slowly, his mouth drawing inward with each pull back. The flavor and warmth of Jake stayed fast in his mind.

Jake bellowed a deep groan and his knees bent slightly against the weight of the passionate teasing. The deep groan cut off and he shot out a growl as his back arched, each hard muscle flexing in the darkness of their home.

Jake spent himself and Tom welcomed the hot, sweet, meaty syrup. He held the fluid in his mouth and enjoyed the savory flavor. As Jake quaked in ecstatic relief, Tom rose from the floor and took up the glass of wine. He sipped the last of the remnants and mixed the acidic zinfandel with his lover’s own nectar.