Blake feels lost after his best friend settles down with a mate. They were both initiated into the Marcelle wolf pack as orphans, but now it’s only Blake without a past or future. He has a spark of hope when his alpha mentions a buried box that could contain the answers he seeks. The only problem—the box is deep in bear territory. When Gage meets a foreign bear near his bathing pond, he’s immediately attracted to the dark-haired stranger. They engage in a passionate love affair, only to question their relationship when the lust settles. Blake’s different customs continually rouse Gage’s suspicions. Is he a human, bear, or a wolf trespassing on their land? Can an alpha bear and wolf bridge the gap in their worlds for the sake of love? Will the contents of the buried box bring them closer or tear them apart?

The Wolf's Pet (MM)
Winona Wilder, Stacey Espino
In Shelf
$3.99
All Books In Cart
All Books In Bookshelf
Excerpt

Blake had survived the night in his little alcove. As soon as the morning light woke him, he restarted his search for the prospector’s cabin Redden spoke of. It couldn’t be too much farther now.

He stopped when he reached a spring-fed pond. It was clear and fresh and likely freezing cold. The crystal clear water tempted him, reminding him how thirsty he was from all his frequent exertion. Blake bent over for a drink, still cautious not to shift and give off the scent of the enemy.

“You don’t belong here.” The voice came from his right side. It was the deepest baritone he’d heard in a long time. It had a gravelly, masculine quality that grabbed his attention.

When he turned to look, there was a man watching him. He hadn’t even heard him approach, which he mentally scolded himself for.

The stranger was a god. He had a rustic appeal, with dark hair, and muscle upon muscle packed onto his large frame. Blake swallowed hard, rising to his feet. He may have been attracted to pretty boys in the past, but all that had changed in the span of two seconds. Part of him determined the man must be a bear shifter, while the other part said it was just one of those loggers or hunters who frequented the bar back home. It was odd being so close to a taller man, one with shoulders broad enough to swallow his shadow from the early morning light. As a Marcelle he was used to being the largest, the one to be reckoned with. Now he felt smaller than a mouse and wasn’t sure how that made him feel. The longer the man stared at him, the more he realized it made him feel hot. Hot and bothered.

“I’m just passing through. Looking for a cabin that’s supposed to be at the base of the Three Mountains.”

“That’s another hour from here. What business do you have there? Where’s your camping party?”

“Just me.” He held his breath, wondering who this man was and if he saw him as a threat. The guy could snap him in two if he wanted, but he stood still, his bulky body rooted in place.

“What are you called?”

The man nodded once.

“Blake.” He almost mentioned the Marcelle Pack name. It was right on the tip of his tongue, as he was a proud member, but he stopped himself. If this was a bear, he’d know the name was associated with wolves. If he was human, he would be suspicious with the talk of packs.

Gage’s eyes were black orbs, so deep he could drown in them. He had a penetrating stare, a quiet strength unlike anything Blake had ever experienced before. Although he’d come across some bad-ass wolves in his days, they had nothing on this man’s intimidating presence. Was Blake delirious from lack of sleep and proper food? Or was he more pent up than he expected, even finding this rustic stranger desirable?

“Great. Do you think you could point me in the right direction?”

The man stepped closer and then circled him, moving like a predator. He had over a week’s worth of scruff on his face, a light sprinkling of hair on his defined pecs, and a dark trail leading to a very well-hung cock. Nothing about Gage should register with his libido. He’d always gone for the blond, lean-muscled men who he could dominate. Now all he wanted was to be owned by this brute of a man.

“You’re unusual,” said Gage. “Where are your clothes?” He acted as if Blake was an alien, something he’d never encountered.

Gage scowled, continuing to look him over as if he were an object he wanted to own. Did he want to be owned, claimed? Unfortunately the dark-haired god made controlling his raw sexuality an impossibility. His cock thickened as it hardened, protruding from his body. There was just something about the man’s voice and the way he looked at him that nearly brought Blake to his knees. He turned away, but Gage circled him until they were facing again. With no clothing, he settled for a poor attempt of cupping his genitals to keep them partially hidden.

He exhaled. “You’re not too bad on the eyes, and it’s been a long night.” It felt odd admitting he was attracted to a stranger. He rarely felt the pull from another male, which was why he hadn’t fucked around in so long.

Gage made a sound that was a mix between a groan and a growl. Whatever it was, it made Blake’s balls pull up high against his body. He couldn’t stop imagining what Gage would look like when fully erect. Even flaccid, he was magnificent. He’d already decided Gage was too comfortable with his nudity to be human. But was this man actually a bear? Blake had never actually met one in person, only heard the stories. Despite his size and strength, Gage wasn’t scary and foreboding like he’d imagined. Besides a lack of refinement, he seemed harmless enough. Maybe a bit stiff, lacking a carefree edge, but he wasn’t the monster he expected.

Blake doubted Gage knew he was a wolf. That would not go over well, and since he was off his own territory, he’d keep that to himself. If this man turned on him, he wouldn’t stand a chance in this foreign forest.

“Turn around and brace the wall.”

Gage followed the command, placing his palms on the cool rock wall of his cave. The gray, irregular stone reminded him that this was his home, and life would go on regardless. If Blake left after the sex or after finding his buried box, that was fate. He couldn’t whine and cry over the loss because he believed in destiny, no matter how cruel.

“Good. Very good. Now hold still.” Blake painted a trail down his spine with a fingertip, making him shiver. Then he whispered in his ear, “You’ll need to be a man for this, baby. Don’t wuss out on me.”

What would it feel like to have another man’s cock in his ass? As much as he wanted it, craved it, he was still apprehensive. Blake was well endowed, and he’d fill every inch of Gage’s ass. “I want it,” he finally admitted.

Blake growled his approval, gently biting along his shoulder from behind. Mark me. The feeling came out of nowhere, but it was more powerful than a midnight storm. “Good boy.” Blake kissed every spot he’d nipped, his hands smoothing down his sides, securing him in place. “Do you feel that?”

He could feel the smooth head of Blake’s cock between the crack of his ass. It excited him, a violent rush of excitement flowing through him from head to toe. The cave felt too small, the air suffocating. An energy he’d never known built up in his balls, his cock growing harder than the rocky surfaces around him.

“Of course you do. Tell me you want this, Gage. Tell me and I’ll fuck you proper.”

Blake chuckled, a deep masculine sound that echoed around them. “That will take longer than a day, I assure you. But you’ll enjoy yourself none the less.”

He pressed forward, impaling his virgin ass with his cock. Gage clawed the rock wall, grinding his teeth together as he accepted the hard length. His ass burned as Blake’s erection fought for entrance, but it was a unique pain, with the promise of pleasure. He wanted this, had for longer than he could remember. A male, one he was undeniably attracted to, had shown interest in him. Why, he wasn’t sure. Like Sterling had said, Gage was nothing to covet.

“You’re tight, bear. So fucking tight.” Blake’s hands tightened on his hips. He could feel his breath against his neck, his chest against his back. He had the sense of acceptance, warmth, and unrelenting lust. Blake reached around and began to stroke his cock. He exhaled in a great rush, not realizing how desperately he needed to be touched. The dual stimulation created a whirlwind inside him. The pressure grew and grew until reality slipped away. All that remained was the cock in his ass and a rough hand around his dick.

Blake was fully seated, the entire length of his large cock buried in his ass. He’d gone so slowly. Gage barely realized he’d filled him completely. Gage tightened around him, getting accustomed to the stretching, the fullness. “Good.”

“Tell me if I hurt you,” he said. “I’ll try to go easy.” Blake kissed his back. As he gradually began to thrust, he licked and sucked his shoulder. He could feel the scrape of his fangs and wondered if the other shifter would dare to mark him. Males didn’t mate one another in his world. But deep down, he didn’t want anything more. He would love to be desirable enough for a man like Blake to want to claim him, to keep him forever. But Gage was the alpha. It was up to him to make that move.

Gage could feel every inch of the cock sliding in and out of his ass, creating delicious friction. The longer they continued, the more his discomfort dissipated, replaced by a heady lust. Thousands of cells sparked to life, making him gasp for air. How much pleasure could a man take?

“Fuck yourself,” Blake demanded as he thrust harder. He could feel the sweat on his skin creating a slickness between them. “Come on, baby, do it.” 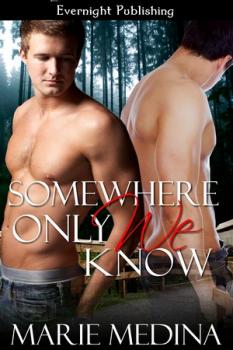