Heat Rating: Sextreme
Word Count: 32,945
15 Ratings (4.5)
Paranormal Shape-shifter Western/Cowboys Alternative (M/M, Gay)
In Bookshelf
In Cart
In Wish List
Available formats
PDF
HTML
Mobi
ePub
Cover Art by Harris Channing
Reviews
This was my first book by Jools Louise. I enjoyed it a lot. It gives a different look at shifters. I read a lot of shifter books. It was nice to read one where no one freaked out when they saw a shifter for the first time. It is also nice to see that no one makes a big deal out of two men making a life together. I am looking forward to read more about Joe's service buddies and how they interact with each other. There were quite a few lines that me laugh out loud.

I am looking forward to see how Zane reels in his mate. I am also interested seeing the David and Chaz start a young love. John seems interesting, so I am hoping he has a story to tell. I know that usually a M/F is not told in M/M book, but I would like to see what happens with Cassidy.

I hope that Joe and any of the other characters that have been estranged from their families make an attempt to fix what is broken. I am also looking forward to how the new humans get along in the world.

I am looking forward the next book in the series. I am putting this author on my notice list for when the next one comes out.

Keep up the good work.

Two Spirit Ranch: After the Rain (MMM)
Jools Louise
In Shelf
$3.99
All Books In Cart
All Books In Bookshelf
Excerpt

Joe had arrived fairly early that morning on the ranch and by mid-afternoon, he had worked up a sweat. Clad now in a pair of ratty blue jeans, he’d discarded his upper clothing and was now bare-chested, enjoying the cool breeze against his hot skin.

At six foot three, Joe was no puny weakling. Fifteen years on the front lines as an Army Ranger had kept his physique in trim, and his body rippled with hard, defined muscle. Tight sloping pecs, a six-pack which had the ladies drooling and biceps which rippled powerfully, inviting the touch of a caressing hand or explorative tongue.

Sweeping, mopping, cleaning everything in sight soon had the house in a state which he could sleep in. It took him a few hours since the place was a mess.

He kept out of his father’s room for now. He couldn’t face that for the moment. But everything else was fair game to the mop, ancient vacuum and a sweeping brush just a small step up from useless. Building a stack of the junk he carried out, he lit a bonfire and watched as old mouse-chewed furniture from the garage went up in smoke. The stuff had been there for a hundred years, judging by the state of it, and he wasn’t going to leave his new baby Bronco out in the cold.

He snorted, thinking his dad would give him that look at such nonsense. Recycle, recycle and recycle. That had been the motto. Well, his motto was out with the old bring in the new, if the old was a hundred years old and falling apart at the seams!

The fire was burning brightly and he grinned to himself. Tomorrow he would see about getting an internet modem setup. He was surprised the old man even had a telephone line out here.

A sudden gust of wind sent him stumbling and he snorted again.

Bloody place. If he didn’t know better, he’d think the old man was haunting him. That would be about right. See if his idiotic son fucked up, huh?

“Er, you want me to come back later, or should I call a shrink?” A voice from behind him had him jumping a foot in the air.

Whirling, he stared at the newcomer. And drooled.

His libido, inert for several months suddenly kicked into overdrive at the mouth-watering morsel of manhood which stood leaning against a dusty pick-up truck.

Glistening black hair the colour of a raven’s wing lay in a thick plait down to his waist. Bright green eyes sparkled brightly with amusement as the man stood watching him. It was obvious the man had been standing there for a while. Some Ranger he was! Had Joe been in combat, he’d be Taliban toast by now.

“Do you usually just drive up on a person unannounced?” Joe belatedly realised he should be annoyed at the man who was trespassing. He ignored the fact that the man exuded sexy like nobody else he’d ever met. He simply oozed it from his pores.

Tall, a couple of inches below Joe’s own six foot three, the man was built like a runner, leanly muscled but not overblown. He probably weighed in at about a hundred and eighty-five pounds to Joe’s two-twenty. Joe’s gay gene was humming at the sight of all that lovely lean manly muscle.

Joe licked his lips as the man pushed off from the truck and approached.

“You must be Joe. I’m Aaron.” He held out a hand and Joe gripped it feeling like he’d been tasered as Aaron’s warmth zipped through him. “My family were friends with your father. I live on the Wind River Reservation. I thought you may need a hand.” He nodded with his head toward the bonfire. His hand was still clasping Joe’s. The look in those green eyes was one of awareness.

Joe let go of Aaron’s hand quickly, stepping back. Despite his interest, despite the obvious interest from Aaron, Joe thought it might come across as a little crass if he showed too much curiosity so soon after the death of his father.

“Er, thanks but I think I’m good. I got the house cleaned up. Just need to get some twenty-first century doodads into it.” He smiled slightly, then flushed as he realised that might sound a little insensitive under the circumstances. His dad was dead for four months and he was criticizing already! Damn!

“My dad and yours were determined to never leave last century. I was always surprised there was a phone line put in here.” Aaron gave Joe a sympathetic smile, patting his arm gently. “He missed you. Never talked about it, but he missed you. He’ll be glad you came back.” Aaron smiled again.

“If you need anything, let me know. My number’s in the book by the phone. Welcome home, Joe.” Aaron turned to leave, his eyes brushing over Joe’s exposed curves briefly before leaving in a cloud of dust. The look in his eyes spoke volumes and Joe felt his cock tighten at the purely sexual once-over. He just barely restrained himself from throwing the sexy guy to the ground and fucking him into the dirt. What was wrong with him? He was acting like he’d never been attracted to a guy before.

Joe sagged as though he’d just done five rounds with Tyson. Damn, Aaron packed a punch! His cock jerked in agreement and he scowled down at it.

“You’d better cool it until later. We have to get the generator in gear. No generator, no heat.” Ignoring the painful bulge pushing against the crotch of his jeans he shook his head. Damn, what a time for his sex drive to kick in. His dad would be so proud!

“Hmmm, let’s get you all cleaned up, lover.” Aaron dripped body wash onto his fingers, massaging them over Joe’s hard body. From tip to toe, no inch was left untouched leaving Joe throbbing with need.

Planting a hand against the wall of the shower Joe braced himself as Aaron paid particular attention to the hard glutes glistening invitingly. Rinsing off the suds Aaron left the shower running, parting the delicious globes of muscled flesh with his fingers.

Groaning in need, Joe pushed back a little. Chuckling, Aaron placed a kiss against Joe’s back, lapping up the rivulets of moisture and following the trail down the crease of Joe’s taut butt to find the pink, clenching hole winking at him.

“I want this ass, lover. May I?” Aaron probed with a finger, sinking into the first knuckle as Joe bucked against the invader, trembling with need.

Looking back at Aaron, eyes glowing with lust Joe snarled, canines dropping as he nodded consent.

Giving a hum of pleasure Aaron dove in further, bringing a second finger into play and curving slightly, trying to find the walnut-sized gland inside. Yelping out, Joe bucked again as Aaron hit his target, pumping his fingers in and out, then scissoring them to prepare Joe’s tight tunnel for a much larger invasion.

Fucking himself on the fingers Joe began to babble incoherently, pleading and begging with Aaron. Grinning Aaron tortured his mate a little more before parking his cock at the loosened hole and rubbing the tip over the opening.

“Better fuck me, sexy, or I may just take over.” Joe growled at him, grabbing Aaron’s head and turning to the side for a hot, toe-curling kiss which had Aaron panting for breath before driving forward and sinking his cock to the hilt inside Joe’s craving hole.

Both men groaned loudly, Joe gasping into Aaron’s mouth as his ass was speared by the thick rod between Aaron’s legs. His head lolled back against Aaron’s shoulder, then he pushed back, forehead against the shower wall, driving Aaron in deeper still.

Joe roared, head thrown back as he released his cock, grabbing Aaron’s ass as he reached back, holding Aaron deep inside as Joe reached his own climax and spurted hot seed all over the place.

“Are you okay? I didn’t hurt you did I?” Aaron asked breathlessly as their lips finally parted.

Joe gave him another kiss, pulling him closer and holding him in a tight embrace.

“You were fantastic, love. I don’t often bottom, but when I do I want to feel it for days afterwards.” He gave a wince as he moved a little. Then he winked at Aaron teasingly. “I’ll definitely know who’s been there.” Aaron gave a pleased smile, groaning as Joe captured his lips again, the kiss hot and possessive.

“Now it’s my turn.” In a stunning show of power Joe lifted Aaron clean off the floor, cradling him like he was a child rather than a full-grown man.

Exiting the bathroom Joe dumped his lover on the bed, crawling up between his damp legs before he proceeded to lap off the residual moisture from every part of Aaron’s body, paying particular attention to the pink rosebud quivering between his ass cheeks. By the time Joe was done Aaron was a writhing mess of quaking lust. Kneeling on hands and knees he begged Joe to fuck him, yelling out as the larger male knelt behind him, lubed his cock and then sank deep inside Aaron’s quivering hole in one powerful lunge. Aaron’s chute was more than ready from the intense tongue massage it had received and he slammed his hips back onto the impaling slab eagerly. 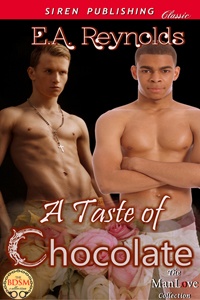