Adele has stumbled upon an odd but attractive man in the Mystery Shop across the street from her lofthouse. Lured in by him almost daily, she soon discovers that he is far more than he seems. Kadar can’t leave the store even if he wants to. He grants every patron the object of their desire, no matter how trivial. Little does Adelle know that what she desires might be enough to set him free. 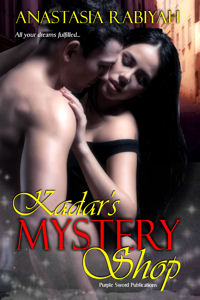 A slice of lust-filled energy zapped through Adele’s fingers. Startled by it, she dropped her keys on the sidewalk. She turned her head and saw a man standing on the other side of the shop window across the street. His face was upturned as he studied the night sky. The store’s light shut off, and he became nothing more than a shadow. Turning away, she released a held breath and slipped her key into the lock. He had looked like any other person, or at least she expected he did to most people who saw him, but she knew he was different. Different in ways most people couldn’t or wouldn’t understand.

Even as a child, she could spot the odd being that wasn’t quite human but passed itself off as one, and she had always done her best to ignore them. No good could come of acknowledging them. Better to be cautious than jump into the unknown. Her father was the perfect example. He had made that mistake when he met her mother and fell in love. Although their time together had been good, when it ended, it ended terribly.

She glanced back at the sign high above the shop’s rustic door. Mystery Shop: All Your Dreams Fulfilled. It looked like something out of a gypsy fortune teller’s back alley stall, and she’d wondered about the place ever since she moved into the loft across the street. Each morning before the shop opened, a line of people stood outside, waiting patiently. Every morning, without fail. She wasn’t exactly sure what the shop sold, but it had to sell something. Going against her better judgment, she decided to find out the next day.

Twelve hours later, she took a step sideways to let a man walk into the shop before her. When the door opened, the scent of something musky and alluring wafted out. She breathed deeply and shivered. It smelled good in there, really good, the kind of good that made her close her eyes and relax. Sweet and decadent like cheesecake and chocolates, but there was another scent in the mix. A manly scent that made her body come alive with passion. Her nipples tightened and goose bumps broke out across her skin. Her heart picked up speed.

Tempted and full of curiosity, she took hold of the door handle and twisted. It opened with a squeak. Adele stepped inside. People milled about, most looking dazed as they went from aisle to aisle, eyes wide, mouths agape. She remained just inside the doorway to see what the shop was all about.

The man who was in the window the night before hurried along, helping his customers locate what they needed. Not one seemed able to find what they’d come for on their own. He had to aid them, and in the case of one man, the shopkeeper took a spoonful of ice cream and practically forced it into the customer’s mouth. Immediately afterward, the patron smiled like a giddy child. He passed a fistful of money to the shopkeeper and left with a gallon of the frozen dessert.

A woman hurried to the shopkeeper and he nodded, as if he knew what it was she sought without her speaking. He took a worn book from a shelf beside him and set it in her hands. She dropped coins into his palm in exchange, then spun to leave, her face set with a satisfied smile. The shopkeeper went to his till to place the money in the drawer. Adele couldn’t help but stare at him. He was not extraordinarily handsome, but he had her attention. His eyes were dark, his face intriguing in its mediocrity. He raised his chin and looked at her for the first time, smiled curtly, and nodded. “I’ll be with you in a moment.”

It was a polite acknowledgment, a courtesy. She had the urge to leave then. This place wasn’t right, whatever it was. There was no organization to the wares on the shelves, to the ice cream cooler with its stacks of odd-sized containers or the mismatched plates and old books she saw here and there. It reminded her of a thrift store in bad repair or a hodgepodge of yard sale items that had ended up in an eclectic storefront. Maybe that’s all it was.

Adele knew it was not. 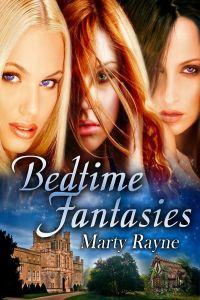 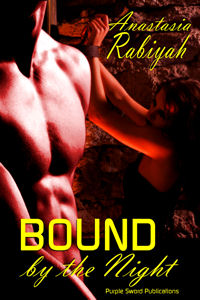 Bound by the Night
Anastasia Rabiyah
In Shelf
$3.99