Lawyers get their kink on in this sizzling collection of short stories. Through the eyes of a lawyer toiling away in the backroom of a law firm, a wicked window into the legal world opens as she spins her outrageous tales of lawyers in love, cranky judges, and those who serve them. From a randy AG who uses his cycle to woo a young law firm associate to a Sheikh and lawyer in a fight for their lives, or a kinky lawyer struggling to adapt to a diagnosis of a crippling, chronic illness to a rowdy fantasy about a new sheriff in town, each lawyer attacks life with humor and passion, always ready to embrace just a dash of kink. You’ll laugh, you’ll cry, you might even blush, but one thing’s for certain, when you’re done reading, you’ll run out and buy a set of handcuffs! 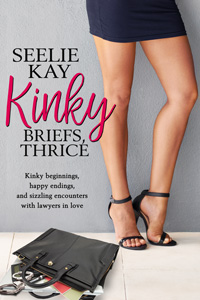 “Arrrgh!” Katia Munk Hrulata exclaimed as she slapped the electronic panel that was supposed to open the front doors to the old Cook County courthouse.

“Problems, Munk?” a smooth, male voice behind her asked.

Munk jerked her wheelchair around and slammed into the legs of Jonathon Greene, her opposing counsel and former lover. She glared at the man as he rubbed the side of his left calf, bunching the trousers to his tailored gray pin-striped suit in his hand, revealing a gray and maroon argyle sock.

“For crying out loud, Munk. Will you be careful with that thing? You drive it like it’s a damn tank.” Though Greene sounded irritated, his bright green eyes were filled with humor. He ran a hand threw his shaggy blonde hair and pursed his lips in mock frustration. “One of these days, I may have to defend you for manslaughter by wheelchair.”

Munk grinned. “Are you telling me a big bad boy like you is afraid of defenseless little ole me?” She put a hand over her heart and fluttered her eyelashes. “Be still my lonely little heart.”

Greene smirked. “I told you before, they should have given you training wheels with that thing. You are a menace to society.” He grabbed the heavy metal doors and opened them, ushering Munk inside, careful to stand out of her way.

Katia had been nicknamed Munk in college. Although she was blessed with the aristocratic porcelain features of her Czech ancestors, she had also been cursed with chubby cheeks, ones that puffed out like the furry rodents memorialized in the cartoon, The Chipmunks. When Alvin became all the rage among her college companions, the resemblance was quickly noted and the nickname stuck. Eventually, Chipmunk was shortened to Munk. Although Munk had graduated from law school ten years before, the full cheeks remained. So did the nickname.

“Dammit, Roland, those blasted doors are not working again,” Munk complained as she approached the security guard. She handed him her purse and briefcase and rolled around the metal detector. “Someday, some disability rights group is going to sue your ass off for failing to comply with accessibility standards, and I’ll be right there with them.”

Roland chuckled and handed Munk her possessions. “Go right ahead, Munk. It ain’t my dime. You just sue that big ass county to your heart’s content. And good luck collecting. I keep hearing the county’s broke. In the meantime, would a pretty young thing like you care to join me for lunch? Maeve packed extra macaroons, just for you. Raspberry chocolate cream.”

Munk smiled. Roland was as old as her grandfather and just as wrinkled. Once a porter for the Chicago Pacific Railway, he now manned the metal detectors at the courthouse. He was the first person Monk had met at the courthouse after she graduated from law school. They had become fast friends, and since Munk had been relegated to a wheelchair three months earlier, Roland and his wife had begun showering her with extra attention and a lot of sweets.

Munk glanced at Greene, who watched the exchange with interest. “That kind of depends on dickwad here,” she said. “He spends more time objecting to my questions than any other lawyer I’ve worked with. Makes it hard to put on a case. I’ll join you for lunch if he manages to zip it long enough for me to eat.”

Roland laughed. “You should have married him when he asked. Maybe then he’d quiet down.”

Greene blushed, his handsome face pinking clear up to his hairline, and grabbed the handles of Munk’s wheelchair. “The show’s not over until the fat lady sings, my man,” he said with a slight grin. “And the only person I hear singing is some tiny little blonde beauty in a wheelchair.” Greene pushed the chair forward and waved.

“Your Honor,” Munk hissed at Judge Carleton George. “You know I can’t stand up to join this sidebar, and I can barely hear what you’re saying. This simply will not do.” She gestured at him to join her on the side of the bench as her foot impatiently tapped the foot rest on her chair.

Judge George pulled at the few white hairs remaining on his head and frowned. Then he stood up and stepped down from his bench, coming around to the side where Munk sat. Greene joined them.

“Sorry, Munk,” the judge whispered. “I keep forgetting you can’t stand up. I can’t get used to you in a wheelchair.”

Munk shrugged. “Neither can I.” It had been three months since Multiple Sclerosis had dealt a crippling blow to her legs. Despite physical therapy and almost every form of alternative medicine Munk could access, her legs had been slow to come back. She didn’t know if she would walk again or if she would ever get out of the wheelchair, but she was determined not to let that slow her down. She could move just as fast in a wheelchair as she could on two legs. A wheelchair was just more cumbersome. She glanced at Greene. At least I can use it as a weapon.

Munk had paid little attention to accessibility issues before the MS attack. Now it seemed like everywhere she turned, there was a new barrier, a new roadblock. It was especially frustrating in the courthouse. The power doors rarely worked, the ancient elevators were barely large enough for a wheelchair to maneuver, and in the courtroom, where everyone towered over her if she were sitting down, it was tough to conduct business. Although she wasn’t intimidated by the fact everyone now loomed over her, she did sense a change in the balance of power when people talked down to her. Munk had learned to be vocal about her limitations and demand her opponents meet her on equal footing. It was the only way her clients got a fair shot.