Kinky girls come in many shapes and sizes, but all share some common qualities. They live for pleasure – both to give it and receive it – and they’re definitely not afraid to push the sexual boundaries to realise their goal. Whether it’s bondage, role play, toys or al fresco loving, nothing comes between a girl and her kink – unless she wants it to, of course!

For these wild women, variety is the spice of life and sexperimentation is the key to finding complete satisfaction. 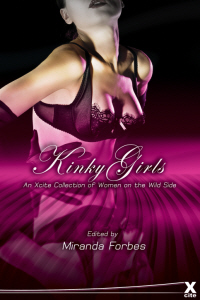 ‘You don't understand,’ I said to the blank-faced man behind the counter at the jewellery store. ‘I need to return this ring. I am no longer engaged and ... And what could I say? My bastard ex fiancé had decided to dump me three weeks before our wedding and head off to Europe for a few months with every dollar in our joint bank account. The bills from the wedding had all come due and even after my parents had given what they could I had been stuck with cancellation fees and costs that were eating away every dollar I could lay my fingers on. I was broke and desperate and I wanted the man behind the counter to allow me to return the ring so I could at least have a little money in my pocket.
‘No,’ the thin and prissy-faced man said stuffily, ‘You don't understand. You cannot return that ring for a refund because it did not come from this store.’ He said that last with a look of utter distaste that would have been funny on any other day.
‘I don't understand,’ I said angrily. ‘What do you mean it did not come from here? Here is the box and it says... ’
‘No matter what the box says, the ring did not come from here. That is not even a diamond, it is a cubic zirconia.’
I stared at him and then down at the ring he had lain on the counter like it would dirty his hand if he touched it too long. A stunning blonde stood at the long counter pretending not to hear us and I had enough time to wonder if she was there to pick out her own ring before I burst into tears. I could not help it, I was just a wreck. I grabbed the box that held the ring the bastard had given me and went out their door reflecting bitterly that he had certainly pulled a fast one on me. I had a bum ring and he had all the checking account money. I was trying to find ways to pay for everything and he was walking across good old Paris.
‘Wait,’ a husky voice said from behind me. I spun around and there she was; a tall, thin beauty in full make-up and dangerous red stilettos and a red and white designer sundress that cost more than my entire wardrobe. It was barely noon. I stood there and she came closer, I could smell the musky bitterness of her perfume, see the perfectly glossed streaks in her honey and platinum hair.
‘What do you want?’ I could hear the tiredness in my voice.
‘I couldn't help but overhear. I was wondering ... I could ... if you would like to make some money I could help you with that.’
I stared at her. She looked like a model or a life sized doll. I couldn't figure out what she wanted with me so I just asked, ‘What do you mean?’
We were standing outside the glass windows of the jewellery store and she took my arm and guided me out of the jeweller’s vision before she spoke. ‘I like sex,’ she said bluntly, ‘I like to fuck. I don't want a relationship or to be bothered with dinner and dancing or sweet words. I don't like games; I just want to get laid. If you want to let me fuck you I will pay you $1,000.’
I burst into laughter. I mean it had to be a joke. For one second I actually looked around to see if I could spot the camera crew. There I stood, all five foot five and one hundred and fifty four pounds of me. Dark brown hair that hung to my shoulders, a face that was pretty when it wasn't so worried looking. Stubborn curves of both hip and tits and thick thighs that always seemed to draw attention. Nothing special. I mean Demi Moore might get hit on like that but me?
‘OK, $2,000.’
She wasn't joking. I stood there looking at her face and the thing that kept me rooted to the spot was that simple truth. She meant it. She wanted to pay me two grand to fuck me.
‘I'm not gay.’
‘Neither am I. I am married, though, to a 74-year-old bastard who has a private eye who follows me as a career so there’s no way I can talk to men. If I could I would, believe it.’
I knew it was insane. I mean who does that kind of thing? But I kept thinking of the way the jerk behind the jewellery store counter had been fawning over her when I walked in. I kept looking at the beauty shopped hair and the perfect toenails peeking from the open toes of her stilettos. I kept thinking how much I could get done with two grand.
‘Fuck it,’ I said, ‘I'm in.’

Three for the Road
Berengaria Brown
In Shelf
$3.99
Tweets by
sirenbookstrand