Kiss of the Alpha

Jay Tabor, rebel leader of Territory Three has  done something he swore he would never do, and that’s work with Quinn, the Supreme Alpha of the Nine Territories, to save his brother Aaron’s life. Now on the run after his rebel hideout was discovered in Virginia, Jay has found a relatively safe haven for his insurgent group deep in the mountains of Tennessee. His peace is short-lived, however, when he gains a new captive—Devon, the Alpha of Territory Three.

Devon has been beaten, tortured and starved by the rebels in an effort to "tame" him, but when he's transferred to a new camp, he discovers not only kindness but an unwanted attraction to his new captor—one that goes both ways. Devon has finally found his true mate in Jay, but the man is his sworn enemy, and a dominant, controlling lover, who insists on his independence.

When they’re both kidnapped by forces bent on harming them, Jay has only one chance to save his wolf. He has to prove that Devon is his submissive partner and he has to do it in front of their enemies in order to save their lives. With only one chance to make it good, he has to put on a show or risk losing his lover and his mate forever.

Kiss of the Alpha

More From Supremacy of Wolves 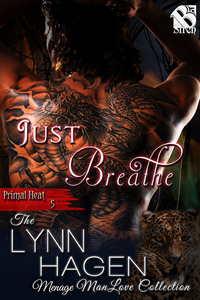