Light of the Body

Light of the Body continues the adventures of Jacob, Callum, Suzy, Zane and Mr. Barnaby in the town of Pembroke Eve.

Jacob and Callum, now living together with Jacob’s parents, are disturbed by a dog barking in the distance one night while getting intimate.

Jacob finally insists they investigate the reason for the dog barking and a strange man confronts them as they venture into their backyard. The events that follow are completely weird to say the least, even for Pembroke Eve standards. The man bites Callum in the scuffle that follows, and as Jacob soon finds out, that bite is a transference.

In fact, the whole town has been infected, with half acting like living zombies and the other half in the hospital in the same condition as Callum. What is causing this outbreak? Only Jacob and his friends, Zane and Mr. Barnaby, seem to be unaffected. But they need to find Suzy. She’s missing and the townsfolk that are the living zombies have been saying Suzy the right one.

What is she the right one for? And what’s more, are these events all connected? 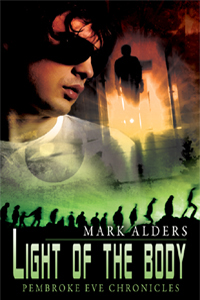 Light of the Body

Zane looked rattled, but tried to hide his emotions by stretching, pretending he was still in the process of waking up. The sight of him flexing in front of me was…how can I say it? Attractive. His armpits, with their little tufts of black hair sprouting out of his white skin were so darn cute. I had always liked how he’d pierced his nipples. I’d never seen a man with pierced nipples before, not in real life, anyway.

His demeanour changed, his glare intent on me. He shrugged his shoulders, as if he’d resolved whatever it was he was thinking about. “Sure, you can do whatever you like to make yourself feel better. I’m here for you, buddy. So, is Cal okay? Really, I mean, he’s gonna be fine, right?”

I sat down on his unmade bed. He lifted up his arms to stretch some more. I got the distinct impression he was showing off for me. I didn’t mind. He was the coolest straight guy I knew—well, I think he’s straight. “I think he’ll be fine,” I repeated. “The doctor reckons he got to him in time—say, you seen Suzy today?” I didn’t want to tell him everything yet. I don’t think I’d be able to remain composed if I recounted the story so soon. Besides, there’d be plenty of time for that later.

“Nope.” His boxer shorts slid down off his thin bony hips when he sucked in his stomach. I could now see his thick, dark public hair above the elastic. “Normally, she ain’t over till after ten o’clock. Mainly ‘cause I don’t get my arse outta bed till then anyway and she don’t see the point prodding me into action.”

“I see,” I said, kind of half-heartedly. I didn’t mind his show, but I was also becoming concerned with Suzy’s whereabouts. An uneasy feeling tickled at the nape of my neck. “You spoken to her lately?”

“Nope,” he repeated. “I was about to go to her place, seein’ as I got woken up and all by the Prime Minister bashin’ on my door this morning. You wanna join me?” He winked at me.

“Yeah, that’ll be good.” Having him come with me was a good idea. I needed all the support I could get. Besides, there was no way I was going to get any rest now. My mind turned over and over with all the things that had happened since…well, I tried not to think about it. “After we’ve done that, we’ll all go see Callum, see if he’s awake. Doctor says he should have his friends and loved ones around him when he does.”

“Sounds cool by me. Anything for my buds. But I think you should tell me everything that happened with Cals. Sounds serious if you ask me.” He wrinkled up his nose. “Say I’ve gotta change out of my old boxers first. I slept in these ones and they stink. I kind of did a bit of whacking off last night dreaming of…stuff. You don’t mind if I change, do you?” Right there and then, he pulled down his boxers.

Away Team
Mark Alders
In Shelf
$4.99
Tweets by
sirenbookstrand