WARNING: this book contains a homoerotica (m/m) and Menage scene.

Everyone's noticed her sexy little shorts, even the frumpy old mayor. She loves it! Not as much as she loves her weekly delivery run through the woods to Graham's cottage. How could her furry running companion change everything?

Following Kris's muscular back into the staff room, Gabby felt three things happen in quick succession. First, her clit thumped in expectation, second she felt the warm moisture coat her panties and third her nipples twisted and hardened even more to press out against the material of her bra and t-shirt, quite painfully.

Kristofer sat in one of the solid, straight back chairs and beckoned her to sit on his waiting lap. She smiled warmly and sat down facing him, with one leg on either side. The quick thought flitted through her mind that he would soon be able to feel her wetness, even through the thickness of their clothes. He could probably already feel the heat on his cock.

He wrapped his arms around her and pulled her closer. Their lips touched, gently at first. They nipped and teased each other as the heat built between them.

The kiss deepened as they explored each other's mouths with searching tongues that seemed intent to find the secrets hidden within the moist darkness. Kris's hands slipped easily under the stretchy material of her yoga pants as he pressed them down about her hips. He massaged and squeezed her hard, round ass cheeks. The motion made her pussy rub against the solid bulge in his pants. She felt her clit jump and throb at the contact as if it begged him to keep the pressure going.

She tore her mouth from his and pressed her face into his shoulder. As she gasped air into her lungs she breathed in the manly scent of him and ground her pussy against the part of him she wanted buried deep inside. A groan of frustration soared up her throat. "Are you just going to sit there, like some sexy statue?" 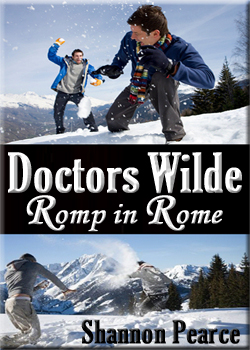