Kalin’s time to find his destined mate has finally come. After holding her in his dreams, he’s anxious to have her in the flesh. One night the wind finally brings him what he’s been waiting for. A scent he knows only from his dreams, but knows nonetheless. Her scent. He uses his keen werewolf senses to effortlessly track her to the Id, a supernatural nightclub filled with all walks of life. A nightclub owned by Adair, a demon who feeds on the lusts and desires of its patrons. And Adair has no desire to let Kalin’s destined mate go.

More From Tales of Id 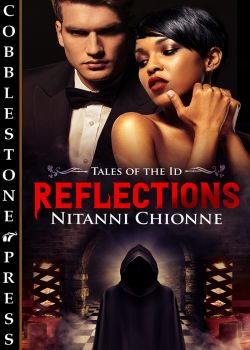 “Are you real?”
Kalin was in semi-darkness with her…again. That was how it was in the dream world. One never knew if the dream givers were telling one something or allowing souls to communicate. “Are you?” He ran his fingers over her arms and reveled in the softness of her skin.
“Please say you are, because if you are—” She gasped as he nuzzled her neck, arching her body against his. “I need you!”
“Where are you?”
She gasped fearfully. “I have to go!”
“Wait!”
Kalin stared at the ceiling fan rotating over him. He kept his breathing as normal as he could, but his muscles were flexed to the point of pain. Another full moon was upon him.

Restless, he rolled out of bed. He was glad the lights were out. The room had become a mess lately, what with his tantrums of frustration. Clothes were strewn about everywhere, and he’d broken a few things. He picked up a pair of workout pants and headed for the bathroom, startling himself as the reflection of his glowing silver eyes caught his attention.

He turned to look at his reflection in the dark. The silver glowing orbs stared back at him, slightly illuminating the strong planes of his face: prominent cheekbones, straight nose, and hard jaw. He raked his fingers through his long dark hair, sweeping it behind his broad shoulders. His pack brothers laughed at him a lot lately, but not too much. He stood six and a half feet tall, and was all muscle. His temper was a dangerous thing to mess with. He’d begun growing a short beard, stalking about like the animal of prey he was known by his pack to be, igniting the passions of females, but none interested him anymore. Before he turned into a wolf, he was quite the playboy, but now there was only one for him, and he’d been waiting for a sign of her, as he was told to do. The pack leader’s wife had told him his mate would reveal herself soon. He believed her. The pack leader’s wife was his mother, after all.

With a sigh that ended in a growl, he dropped the pants on the floor and went into the shower. He turned on the water and set it for lukewarm, not wanting to heat his body up any more than it was but certainly not wanting to freeze, either. He closed his eyes as the shower fell like rain, and again he sighed as he let the water calm him. Finally feeling better, he stepped out of the shower and decided to put on a pair of shorts so he could head to the roof. It was midnight and he wanted to bask in the moonlight, even if it was alone.

He looked over the city, admiring the skyline in front of him. It was nice to have such a grand place to be. Many times over, he thanked his ancestors for having the wisdom to buy property. The family mansion was four stories tall, and being first born, he got his pick of rooms. He liked being up high—surveying the land, the people, the moon that often kept him company—as his family and pack brothers lived out their lives below, some with mates and even expecting children. He was happy the pack was thriving, but on a personal note, his own life seemed to be at a standstill…

Then suddenly, it happened. His blood began to boil, like it was on fire, scorching his veins as it flowed. His muscles constricted painfully, mostly the ones that surrounded his spine and hips. He doubled over. He would think this was a transformation, but it wasn’t. He had learned to control that years ago, and he didn’t have the slight ache that often came when his snout and teeth lengthened. This was different!

He tried to control his breathing, calm himself, but every time he inhaled, the feelings became more intense with a scent that fed his brain. It was one he’d never beheld except in sleep, but knew. Female. Sweet. Unlike any other.

He barked and gave a cry to the moon. She was here! His mate was here! He only had to track her. He looked down at the large front lawn to see his brothers run out of the house and look up at him.

“What the—whoa.” Kalin’s youngest brother, Jude, looked around with his eyes glowing. He shook his head, likely to stop the effect. Even passersby may see through the thick brush and wrought iron fence surrounding the house. “You smell that, Hunter?”

Kalin ran down to his room, and put on jeans. He didn’t intend to do any transforming tonight. He was about to pull on his T-shirt, but realized his hair would wet it. He ran into the bathroom and began blow-drying his hair.

Hunter stopped at the bathroom door. “Oh, my God.”

“You don’t have to go, Hunter,” Kalin growled. His hair was dry enough to get dressed so he put on his T-shirt. “You’re still kind of honeymooning, aren’t you?”

“I wouldn’t miss this for the world.” Hunter nodded. “Besides, Joni understands, and I think she needs some rest.”

“Yeah, and you’ve got the scent now.” Jude smiled. “Hell, I think I could track her—” His expression changed when he saw Kalin’s eyes glow. “But not like you can, of course.”

Kalin shook his head, giving his brother an apologetic smile. His brother would never compete with him for a mate, he knew better than that. “Sorry, bro, that was instinct.”

The three ran down the steps of the house, causing a ruckus much as they did as children.

The three turned to see their father, Jacob.

“And I hate to tell you this, but I think you need to go to that Id.”

Kalin’s breath caught. “The nightclub? Are you sure, Ni’nah?”

“There are many scents surrounding her.” Jacob shook his head. “I know you are honed in on her and that may be all you’re picking up. I am glad you are taking your brothers. I think Nero is already there.”

“You have been talking to Mom,” Kalin acknowledged, “but thanks.”

Jacob nodded with a smile, and offered his hand. “Good hunting.”

“Good moon.” Kalin took it and they clasped, drawing each other close to touch cheeks. It was a traditional show of affection, and not always done. He felt more hopeful than ever.

The others said their goodbyes and they jumped on their motorcycles. They had cars, but they wanted speed. With a rev of engines, they disappeared into the night.