Who knew a fatal crash could feel so good? Houston Lawton's sons are every woman's dream men: successful, intelligent, rich. There's just one little problem; they can't feel love. A jaded woman might claim that's typical of the breed, but they're not clueless. Cybernetic inhibitors suppress the emotion to stabilize their neuro-processors. They've never lost control...until now. 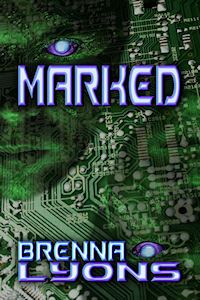 Alec Lawton sat in the form-fitting leather chair, sighing as the back slid silently downward to accommodate his relaxing body. It was a toy, one of the many conveniences his famous father, Houston Lawton, had provided for him over the short forty years of Alec’s life.

He fingered the disc over his heart sadly. It was no toy; neither was it an interesting gadget meant to give him ease or amuse him. It wasn’t even his to control. He knew what it was meant to do, of course. Any bio-mechanical engineer worth his salt could have figured that much out, and Alec was without peers. He smiled wryly that he himself had been engineered that way.

Unbidden, her face at the height of climax taunted him, accompanied by phantom flicks of her tongue against the head of his still-engorged cock. It hardened more painfully, and he groaned.

“Hannah,” he breathed. He’d wanted it to come out a curse, but he couldn’t even fake the sentiment; he wanted her too much to do that.

It was the disc. He knew it. For the last ten days, it had been forcing cross-links in his memory core and the associated human mind he possessed, stimulating his very human endocrine system to flood his body with heavy doses of conflicting chemicals, driving him to distraction, then near-mad in this clawing need for her.

He couldn’t remove the disc. The most perfunctory examination would show that it had attached itself to his vital processor functions in those precious few hours his human mind and body had required sleep, and the examinations Alec and Gabriel had subjected it to had been neither careless nor quick and superficial.

Removing the disc would mean death, first for his processor and his augmented mental and physical functionality by extension...then for his human tissues, when the loss of hydraulic control led to the crushing weight of his hardware exerted onto the softer tissues, destroying autonomic functions and, if he lived that long, destroying his spinal column.

The disc could do nearly anything, up to and including forcing a shut-down of his processor. It wasn’t a weapon created to blackmail him.

Even if he hadn’t been programmed with Houston’s cyber morality code—a code that would cause Alec to choose death rather than betray family, company, country, or cause harm—his personal ethics, fully capable of tempering the very polar, binary responses of his machine-self, agreed that death was better than such a betrayal of others.

If Hannah knew enough about his systems to design the disc, she knew it couldn’t be used against him that way. It had been designed to kill him...to kill them all.

“May I join you?” Her voice was dark and sultry, smoother than a purr, a bold invitation that no man—or cyborg—could have remained oblivious to.

Alec looked up at her, noting the drink she offered in surprise. While alcohol affected his lesser human functions—coordination and speech patterns by extension—his processor kept his primary “thinking mind” clear. As a result, he rarely had more than one drink a night...just to keep up appearances.

The woman holding the drink was more mouth-watering than anything he’d seen in months. Her auburn hair was only shades darker than his own, than the hair that his brothers also possessed. Her eyes were just that perfect shade of Kelly green, almost surreal in their perfection.

She stood at five-point-two inches shorter than he—his processor extrapolated. A lush body that doctors would term “overweight,” erroneously from his point of view, completed the picture. In fact, she was nearly his ideal woman, offering her company, a walking dream.

Not that he had wet dreams; his processor saw to that.

“I’d like that,” he invited her, motioning to the seat to his right.

She sat, crossing one plump thigh over the other. The drink settled in front of him, and her cleavage drew his eyes. Was she leaning forward on purpose?

“Slow, comfortable screw against the wall?” she asked, naming his favorite drink.

Alec snapped his mouth shut, horrified. Where had that come from? He ran a diagnostic exam on his processor, but it seemed to be functioning properly. There were no alarms or warning beacons. His track of all active programs was cut short by her reply.

“I was hoping you felt that way.”

“Were you?” His normal clear thinking deserted him, leaving him adrift in unfamiliar waters. It almost seemed as if two programs were acting at cross-purposes, an error he hadn’t encountered since he was twelve years old, but none of his “oxymoron alarms,” as Houston had called them, were warning him off.

Her hand settled on his thigh beneath the table, and Alec’s body reacted fiercely to the stimulus. He’d bedded women before; it was part of his cover as a fully-human man to do so, though his processor could easily suppress all sexual urges. He’d even enjoyed bedding them, a natural extension of the processor stimulating his drive at the appropriate time, but he could tell he’d enjoy this a whole lot more.

“Oh, yes,” she whispered, leaning close to his ear and giving him another nearly-heart stopping view of her cleavage. She moved her hand higher, cupping his length.

Alec’s ragged breathing wasn’t being smoothed by his processor as it normally would.

“Are you interested?” she asked, rubbing lightly at the proof that he was.

“My place is upstairs.”

Again, he had no idea where the words had come from. Alec never took women home with him. It was always her place or a neutral location for a fuck, then home for his rest cycle...alone.

She shifted from her chair onto his lap, her buttocks taunting his sensitized cock. Her hand wrapped around his neck, pulling Alec’s mouth down to hers.

Sensations coursed over both halves of his brain: her scent, taste, the feel of her body against his, memories of her cleavage so close to his face that he could have dipped down for a stroke of his tongue, the sounds of her moans, half-muted in his mouth...

Alec broke off the kiss, noting the bartender’s questioning look out of the corner of his eye. He pretended not to see it.

One portion of his mind reasoned that he couldn’t continue this in the bar. Another wanted to finish as soon as laws and ethics allowed. He didn’t dare try to sort out which mind screamed which. The binary solution, delivered by both halves in unison in a nanosecond of time, was to get her into his private elevator. Now!

A Bride for the Taking (MF)
Lorraine Nelson
In Shelf
$3.99
Tweets by
sirenbookstrand