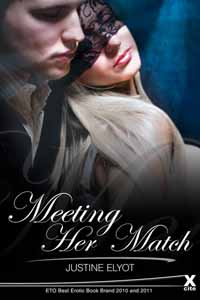 "Every sexual fantasy imaginable - these are the ingredients that make up the business of pleasure." - Jade Magazine

"Meeting Her Match is like Fifty Shades of Grey to the extreme! Luckily, Cherry knows what she wants and isn’t completely naïve to the world. I loved Cherry. During the course of the story, her character growth is tremendous. At first, she is an unsure woman embarking on a new lifestyle, but her adventures result in discovery of what she likes and dislikes. Her character grow is unprecedented because she knows little to nothing at the beginning (albeit a successful, professional woman in her own right who simply hadn’t explored much in the bedroom) to a woman who knows what she wants and who she wants.

At heart, this plot is a character study following Cherry. Other interesting characters pop up along the way, but these characters do not have as much depth potentially due to Cherry’s first person perspective. Honestly, I craved a bit more out of these other characters, especially the person she eventually ends up with (it’s fairly obvious who he is). Luckily, the pacing of the story is smooth where Cherry’s adventures are spaced logically, even if I wished more from Mr. Right. Meeting Her Match is hot and adventurous where Cherry learns more about herself through self-expression in the bedroom. I loved her story and her many dimensions, even though I wanted more of the other characters. Meeting Her Match is definitely worth the price for fans of erotic romance! - Booking It Reviews

Destined to Be Three (MMF)
Mia Ashlinn
In Shelf
$5.99
Tweets by
sirenbookstrand