Two years ago, Ewyn Calderone escaped the subjugation of domestic violence. The love and support of Devin Nilsson helped Ewyn reclaim his self-esteem. Now his fragile self-confidence is tested when his brother, the Calderone mob boss, vanishes, Ewyn becomes head of the family, and his pregnant niece and her sister die in a purported accident. The baby survives and Ewyn becomes guardian.

Days later, police report the deaths are homicides then ask about the women’s dubious lifestyles. Ewyn has no answers and the panic of self-doubt re-emerges. To alleviate Ewyn’s angst, Devin enlists law enforcement friends to help unravel the mystery of paternity, the nieces’ lives and deaths, and stop a killer before the child becomes the next victim. 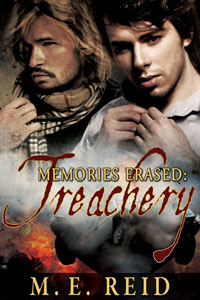 Devin nipped Ewyn’s succulent bottom lip, drawing it into his mouth, sucking, and teasing with his tongue. “Mmm. Enough about the accident for now. I need your sexy ass some kind of fierce. When will Kiera need to be fed?”

“Oh, Dev, she is such a good baby. She normally sleeps through the night.”

“The shower and the blow dryer probably disturbed her.” He brushed a stray curl from Ewyn’s forehead. “I don’t suppose she’s used to late night visitors.”

“True.” Ewyn glanced at the clock. “She won’t be ready for breakfast for two hours. After she eats, I’ll bathe and dress her, then take her home. Usually, she spends the entire weekend with me, but since it’s your first weekend back…”

“Good enough. Two hours should be enough time to slake my hunger, and then I’ll want food,” he teased. “While we eat, we’ll go over the details of the accident again.” He threaded his fingers through the soft curls and pulled Ewyn’s head closer. “Come here, you.”

Devin reclaimed Ewyn’s mouth and rolled baby-boy beneath him. With great reluctance, he pulled away from the unique taste he only dreamt about over the past few months…mouth moving down over the stubborn chin to the slim neck, nuzzling his way over to that special spot behind the ear. Lips pulling, he latched on, sucking the tender skin inside, teeth and tongue teasing until he had Ewyn writhing beneath him. Cocks pressed between them, their bodies moved against one another as guttural moans echoed deep within their throats.

Contemplating the import of Devin’s words and actions made Ewyn’s balls ache and his cock jerk to attention. Toes curling against the sturdy legs, heat strafed his body as he squirmed beneath the velvet touch stroking its way over his body. Teeth grazing across his tender nipples and sensitive skin had sparks of unadulterated pleasure surging along the network of nerves just below the surface.

The torment continued with Devin’s mouth hovering above his navel. Hot air swept across its surface as Devin’s tongue invaded the shallow depths, darting in and out, before the firm lips sucked the surrounding skin into all that wet heat. Muscles quivering beneath the onslaught, Ewyn’s fingers clenched and unclenched as he weaved them through the soft blond waves.

“Dev.” His grip tightened as the assault moved lower.

Ewyn inched his legs further apart and Devin settled between them, his tongue cruising the sensitive grooves flanking Ewyn’s groin causing electrifying impulses to jet through his body. Hips tilting off the bed in anticipation of the first sizzling touch of Devin’s mouth, he stifled a whimper when only a wisp of breath huffed out, bathing his glans in warmth. Then, Devin’s mouth was there.

On the Wings of a Butterfly (MM)
Scarlet Hyacinth
In Shelf
$2.50
Tweets by
sirenbookstrand