Mile High (Lust in an Airplane)

Mile High (Lust in an Airplane) 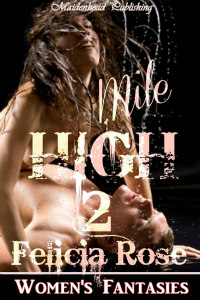 Rising and stepping across the aisle, he picked up my e-reader from the seat next to me and sat down. "What'cha reading, My Brother's Keeper?"

I snatched the e-reader back. "If you don't mind."

I sighed, "It's about a man who's obsessed with his sister-in-law."

"I saw what you were doing…touching yourself."

Oh my God. He did see me! His comment knocked the breath from my lungs. A flush of heat coursed through me.

"I'm extremely attracted to you."

Jesus, The blond haired god wants me. I gazed into the intense blue eyes staring into mine. I wanted him too, especially now, but…"I'm married."

My thigh burned as he rested his large hand upon it, inches from my already randy pussy and swollen clit. I sighed.

The inflection on fucking sounded deliciously dirty. I should have been offended; instead my pulse sped up and my cunt clenched.

"Yeah, our family is supposed to have a little of everything. A mulligan stew as they say—mostly latino, a little black and a touch of white."

I studied his very serious, very handsome face and imagined his sexy thin lips touching mine. I did want him. Unbidden, salacious mental images of what he suggested imposed themselves in my mind. Suddenly, I became unbearably hot.

He glanced around once more.

Apparently, contemplating his lurid proposal, I did too. As far back as I could see most passengers were asleep. One or two watched the movie.

"Well whatever you are, it all comes together in one nice package. And your blue eyes are amazing."

"Thank you. There was supposed to be a blue eyed German in our tree somewhere. You look like you might be German."

He shook his head. "English." His citrus cologne and warm minty breath sent shivers down my spine, as he leaned in and whispered in my ear, "I saw you looking me over, so I know darned well you're interested. You're gorgeous and the bottom line is I'd love to fuck you. We're just two strangers, wildly attracted to each other, with an opportunity to do something about it."

Having been a flight attendant for three years, I'd had yet to become a member of the 'mile high club', even though I thought it would be cool. The man sitting beside me was such a hunk he would be the perfect partner, I wanted him, but something held me back. What am I waiting for? Trying to decide what to do, his hand brazenly slipped between my legs and cupped my entire sex, effectively robbing my lungs of oxygen. As erotic lust coursed through my veins—I had to have him. Reaching over, I felt his large hard bulge and stroked him through his slacks.

Speaking in a hushed tone, he asked, "We'll be in Denver in twenty minutes. Are you ready?"

"I know you want to. What's holding you back?"

I sighed. "I guess it's that I've never had sex with a white man."

Chuckling he stood and grabbed my hand. Pulled on it he said, "I won't bite. C'mon, it'll be fun and I'll make it easy on you."

"All right, but you go in first. Leave the door ajar. I'll join you in a few seconds."