Miles Diamond and the Demon of Death 5

The Adventures of Miles Diamond 10

Miles and his crew are snatched from the jaws of a volcano, only to fall once again into the clutches of arch-nemesis Nelson Chin. All the players in the race to unearth a long-lost Aztec treasure come together and Miles presents them with the key to solving the mystery. The treasure is revealed, mayhem ensues and Miles finally meets the elusive man in the gray suit. Join the fun and adventure while Miles saves the day and solves the dazzling enigma of The Demon of Death.

Miles Diamond and the Demon of Death 5

The Adventures of Miles Diamond 10 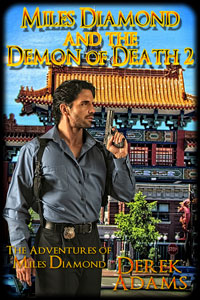 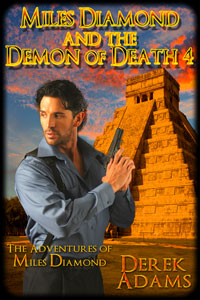 When I awoke, it was quiet except for the sound of water lapping against the hull of the boat. Actually, I think it was the silence that woke me. I sat up and looked around. Jackson hovered above the boat’s fuel tank. His expression was grim.

“Out of gas!” He kicked the empty tank with the toe of his sandaled foot. To judge by the way his forehead furrowed, it hurt.

“Now what?” I stood and scanned the shoreline. It was visible, but the expanse of water that separated the boat from dry land was a bit daunting.

“We swim.” Rudy’s tone made it clear that it wasn’t a suggestion. “It isn’t that far, but we’ll have to be careful. The currents around here might be treacherous.”

“Not much chance we might just float toward the shore, huh?”

“Sorry, Miles, but since the engine died, we’ve been drifting steadily out to sea. The only shore we’re liable to float toward is over there.” He pointed out across the wide expanse of the ocean. “We’d better go and go now, or it’ll be too late.”

“You gonna be all right, Miles?” Jackson put a hand on my shoulder. I looked up at him and nodded.

“I feel much better, thanks. The double vision thing is gone. I’ve got a hell of a headache, but other than that, I’m ready to swim anywhere.”

“Try to aim for the shore.” Rudy skewered me with one of his looks. He didn’t look quite as pissed as he had earlier, but he was clearly still angry with me.

“You don’t look too bad with black hair.” I looked at him appraisingly. “Your hairline’s a little smeary, but we can probably do something about that with a little body paint. Maybe when we get back to civilization, I can do something about that body hair for you. The contrast in colors is just a bit jarring.” I stared intently at the hair on his forearms. “Hey, how did you come through that volcano episode without getting your hair all singed off like I did?”

“The peroxide probably damaged your follicles, Miles. We really don’t have time to trade beauty secrets right now. Tie your clothes in a bundle and let’s go.”

“If you want to swim fully dressed, be my guest. In fact, if you like, I’d be more than happy to tie the anchor to your ankle. It’s your choice.”

I stripped. Rudy dived in first, followed by Jackson. I secured my little bundle of clothes to a cord around my waist and plunged beneath the azure waves. The water felt good and the throbbing in my head subsided when I settled into a steady, repetitive kick-stroke-kick routine. I trailed along in the wake churned up by Rudy’s powerful legs, focusing on his pale, fuzzy buns rather than on the distant shoreline. Watching them flex every time he kicked was sheer poetry.

I had no sooner begun to enjoy my swim when Jackson shattered my mood by uttering a single word. “Shark!” His voice was tight.

“Don’t break your stroke,” Rudy called out over his shoulder. “Try to move closer to me, but don’t start flailing around. Maybe it’ll just ignore us.” I followed Rudy’s instructions to the letter, drawing up so close to him that I could have sucked his toes. Jackson moved in beside us. Unfortunately, so did the shark.

At first I couldn’t see anything. Then a sinister triangular fin cut the water, not more than fifty feet distant. It made a wide circle around us, obviously checking out our snack potential. I had read about shark attacks and they never had what I would call a happy ending. Even survivors generally had to deal with missing limbs and nasty tooth marks. This looked very bad indeed.

The shark completed a second circuit and then veered sharply, its fin cutting toward us like a knife. The three of us kept swimming doggedly, simply because there was nothing else to do. When the shark came so close that I could see its sleek form just beneath the blue waters, something shot toward it like a torpedo. The shark veered abruptly off course, then turned and headed for us a second time. Again, a shadowy form raced toward the shark and again the shark veered off course.

“Keep swimming,” Rudy shouted. I kicked it into high gear and stroked for all I was worth. When I dared to scan our immediate surroundings again, there was no sign of a fin. Then, just as my heart was about to descend from my throat back into my chest cavity, the waters all around us roiled and several blunt-snouted, smiling creatures reared their heads above the waves.

“Dolphins!” Rudy had begun to dog-paddle. “We’ve been rescued by dolphins.”

“Wow!” I paddled over close to Rudy. “We’ve been saved by Flipper!”

“Are we ever glad to see you fellows!” Rudy held out his hand in greeting. One of the dolphins swam a bit closer and nudged his extended fingers with his nose. Much to my surprise the dolphin spun around and shot between us. Its cool body brushed against my legs. The others followed suit and all three of us began to frolic with our saviors.

“Maybe we can hitch a ride, guys.” Rudy stroked one of our new friends. “If they agree to it, that is.”

“So, what do we do?” I for one couldn’t get out of the ocean fast enough.

“Try grabbing a dorsal fin. That’s the one that sticks up in the middle of their back. If they’ll let you hang on, they might just take us into shore.”

“So how do we know that’s where they’ll take us?” I was intrigued, but not quite convinced.

“Scientists speculate that they’re smarter than humans. I tend to agree. I have a feeling they recognize us as land-dwelling cousins.”

I was still doubtful, but when Rudy gently grasped the fin of the big fellow cavorting around him, the creature didn’t seem to mind. In fact, it turned toward the shore and pulled Rudy right along behind. Jackson had similar success. When I got close enough, I slipped my hands around the stiff fin and held on for dear life. The sensation was similar to water skiing – without benefit of boat or skis. Actually, I have to admit the experience was exhilarating.

Our water taxis brought us to within fifty yards of shore, then waited as we swam the rest of the way to terra firma. I found my footing in waist-deep water and turned to wave at our saviors. One leaped high into the air and executed a perfect double somersault. The others flipped their tails in the air and then disappeared as quickly as they had arrived.

“That was amazing!” The three of us sat side by side on the beach, gasping for air. “I was convinced that we were gonna be lunch.”

“We almost were.” Rudy hugged his knees to his chest. “Fortunately for us, dolphins dislike sharks.”

“That, Miles, is one of the mysteries of the universe when you consider what people have done to them and their habitat over the centuries. Remind me to make a big donation to marine mammal preservation if I ever get my hands on any cash.”