His feet splayed his fist on his hips, he stood with his back to me facing the window. Power radiated from him. I could feel it like a cloak…or a shroud. The wolves outside the window began to whimper and back away. Icy fingers of fear crawled up my spine. The hair on my neck rose. Moonlight pooled around his tall muscled body and threw a long black shadow across the floor. Inch by inch the wolves backed up, whining, uneasy. The thumping at the door ceased. What the—? This is way past weird. I don’t know of any pranics with this kind of power. I locked my wobbly knees and lifted my chin fighting against the trembles. I knew if I gave in to it, I would shake so badly, I’d be banging against the door like those ravening werewolves were only moments before. I waited, dreading the moment he would turn to face me. The seconds stretched. He swung around. His mouth closed. Relief like a monsoon swept through me. At the moment, I didn’t think I could deal with the man of my dreams drawing back his lips and exposing fangs. “What are you? Who are you?” I asked through chattering teeth. 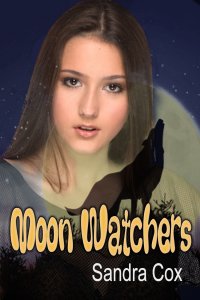 Being a Werewolf hunter leaves little time for estrogen or emotion.

Why do I say this? Because I’m currently in a very odd situation, odder than normal.

My name is Jolene Sayer. I’ve hunted Weres with my father since I was thirteen. He’s a good dad, just a bit distracted. His first and foremost responsibility, as he sees it, is hunting Weres. Same goes for me. Some people think being a Were hunter is weird. For me it’s perfectly normal. What I see as odd is my attraction to the hunkalicious Braden Knight. Why? I think he’s a vampire.

As the full moon rose above the leafless black trees, an eerie howl shattered the night. I rubbed the goose bumps on my arms and felt the hair on my neck rise. Moonlight fell in shadowy patches across the living room floor of the cottage I’d inherited on my eighteenth birthday, last week to be exact.

Dad’s in Europe, tracking down a tip he got on a Were pack. That’s how I come to be alone deep in the forests of Minnesota where there is considerable werewolf activity.

I’ve hunted Weres since I was thirteen, but this is the first time I’ve been completely on my own.

A branch tapped against the window. I jumped, then shook my head at my nerves. “Geez.” When my heart settled down, I leaned forward and peered out the window. My hand tightened on the long silver knife at my waist. Nothing moved outside. “Get a grip, Jo.”

I took a deep breath and started toward the kitchen. The tapping came again, this time louder. I whirled. It wasn’t the window, it was the door. Someone or something was on the other side.

My legs stiff, my knees locked, I took one slow step after another. My hand wrapped around the knife and tightened till my knuckles turned white. Who could be out at--I glanced at my watch--ten at night in an isolated corner of the north. I crept through the living room into the tiny foyer.

I took a deep breath and cleared my mind, the way dad had taught me. Nerves left me. The cold logic of the warrior set in. Making sure the chain was in place, I cracked the door, ready to slice anything too close to the opening.

My hand fell to my side. I gaped in astonishment. I removed the latch and stood in the doorway, one hand on the frame, stunned.

“Braden! What are you doing here?” I’d met Braden Knight briefly when I’d visited my distant cousin Zoe Tempest, vampire hunter extraordinaire. Perhaps you’ve heard of her. If not, I guarantee you will. She’s come to hunting the undead rather late in life--seventeen--but she’s taken to it like a pro, swift, vigilant and tough.

But I’m stalling. I’d felt an attraction for Braden Knight from the first moment I saw his bronzed pecs and thick chestnut hair.

“Zoe told me your dad was in Europe and had left you alone in the middle of Nowhere Minnesota. May I come in?”

Damn good question. Zoe had confided her fears to me that the handsome man standing in front of me was of the undead variety. But whether of the pranic--that lives on other people’s energy and aren’t truly undead--or the blood--that survives on warm, red heart fluid--she wasn’t sure.

Zoe’s not even sure he’s a vampire. All she knows is that he has extraordinary powers for a nineteen year old human.

Suddenly, the decision was made for me. Out of the corner of my eye, I saw a huge black wolf rush forward, its lips drawn back in a snarl, fangs gleaming, eyes blood red.

Without thought, I jerked Braden inside and slammed the door. And just in time. The wolf lunged, throwing its weight against the door as I locked it and drew the chain. For good measure, I slid an old-fashioned wooden bolt home.

The wolf howled its rage. Once again it hurled its weight against the door and caused the thick oak to tremble. I hoped the hinges held. Not that I minded fighting a Were, but considering the foot of snow outside, I could do without my door hanging by a hinge.

In the distance, another wolf cried in response, then another and another.

I looked at Braden. He looked at me. For a moment I was distracted by his glowing aqua eyes. I’d never seen eyes quite that oceanic color, nor lashes that thick without the aid of mascara. I squinted. Is there a tinge of red around them or was that my imagination?

The door vibrated as more than one body flung itself against it and brought me back to the present with a jerk.

“Not exactly what you’d call typical behavior,” Braden said mildly and leaned against the door to counteract the pressure coming from the other side.

“Yuh think?” The boy’s a master at understatement.

I ran to the living room where my silver sword nestled in the corner, scooped it up and came back to join him at the door.

Braden raised an eyebrow. “Would I be correct in assuming we are dealing with Weres and not regular wolves?”

Now how would he know that? It’s not exactly the response an average layman would make.

Propped against the door, keeping the thumping to a minimum, he spoke as casually as if he were inquiring about the weather.

I looked out the window at the bright, full moon. No wonder they were going nuts. A gray wolf lunged at the clear pane, then fell back as it held. Thank God I’d had the glass replaced with heavy duty Plexiglas.

“Weres? You mean werewolves? You’re kidding right?” I laughed. Even to me my response sounded stiff and artificial.

“Cut the crap, Jo. While I appreciate the façade, I know what they are and...what you are.” He gave me a level look.

“Why, whatever do you mean?” I tried to look baffled but I’m not good at pretense or small talk.

At that moment two wolves’ heads appeared in the window with glowing, crimson eyes.

I sighed. Even if I were more mentally nimble, it would be hard to convince anyone, especially Braden, those were ordinary wolves out there. “What gave them away? The shiny red eyes?” I asked sarcastically.

If Braden was indeed a vampire, he probably had no problem with the concept of Weres. And what a lovely thought, locked inside with a vamp while Weres howled and thumped outside at the door. It made a girl feel all warm and fuzzy inside.

“Just what did you do to piss these guys off?” Braden looked at me and marveled.

“I have no idea. But I certainly intend to find out.” I looked at my window and wrinkled my nose as rivulets of drool from the frenzied wolves ran down the acrylic plastic.

My teeth clicked as I ground them together. I was used to fighting werewolves but I didn’t like the odds. There had to be a half a dozen at the window now and from the howls at the door that many more in the front.

I raised my sword in my right hand and my knife in my left as I plotted my strategy, or tried to. Unfortunately, my mind was blank.

“Hmm?” I couldn’t take my gaze off those red eyes and glistening fangs that jumped at the window. I sent a prayer to the powers that be for the thermoplastic synthetic resin windowpane and solid oak door to withstand the constant beating they were taking. What if those creatures kept it up all night? They have super human strength when the moon is full.

“Come here and lean against the door.”

“Why?” I stared at him, uneasy, and shifted my weight to the balls of my feet then rolled back on my heels. Even though just to look at him sent electric sparks surging through my system, I didn’t trust him and certainly didn’t want to be within fangs distance of him.

Beneath the casual pose I could feel the impatience that ran along his skin. He looked at me. That was all it took. I walked reluctantly and against my will toward him, pulled along by that powerful magnetic gaze. God, if he’s a vampire please let him be of the pranic variety. Just in case my prayer went unanswered I kept my sword and knife raised.

He looked at my weapons. A grin flashed across his face. “Lean against the door.”

I held my weapons and pushed my shoulder against it. As soon as I did, he walked to the window. Without his weight, the door vibrated harder than ever. I swear I felt a splinter in my arm.

His feet splayed, fist on his hips, he stood with his back to me and faced the window. Power radiated from him. I could feel it like a cloak...or a shroud.

The wolves outside the window whimpered and backed away.

Icy fingers of fear crawled up my spine. The hair on the nape of my neck rose. Moonlight pooled around his tall muscled body and threw a long black shadow across the floor.

Inch by inch the wolves backed up, whining, uneasy. The thumping at the door ceased.

What the--? This is way past weird. I don’t know of any pranics with this kind of power. I locked my wobbly knees and lifted my chin to fight against the trembles. I knew if I gave in to it, I would shake so badly, I’d bang against the door like those ravening werewolves were only moments before.

I waited, dreading the moment he would turn to face me. The seconds stretched.

He swung around. His mouth closed. Relief like a monsoon swept through me. At the moment, I didn’t think I could deal with the man of my dreams if he drew back his lips and exposed fangs.

“What are you? Who are you?” I asked through teeth that chattered. 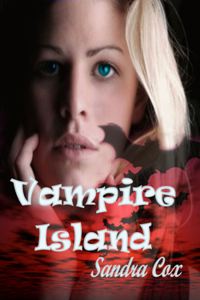