Rick's brooding over his missing wife doesn't stop him from inviting Brandon to move into his mansion in the hills of southwest Wisconsin. When the sheriff finds bodies at the estate, it's a race against time to save Rick from accusations of murder. Brandon struggles with poverty and longs to be a doctor. He falls in with Rick, an older, closeted, banker whose wealthy wife Victoria is mysteriously missing. Romance blooms between the two men and all seems well, until the sheriff discovers Victoria's body at the family estate, Lindermont Manor. Danger and scandal abound as Brandon has to decipher the clues to save Rick from prison. The shocking truth about the murder changes their lives forever. 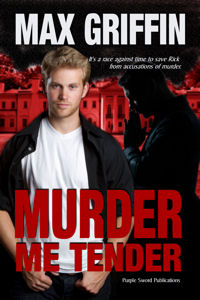 The trail twisted and turned through the valley floor, following an old roadbed. Prickly-pear cacti littered the canyon, while the red and gray cliffs soared overhead. The farther he hiked into it, the narrower the canyon got. He paused and ran his fingers over the lizardlike bark of an alligator pine and remembered hiking here yesterday. Memories of Rick, the shadow of his smile, the timbre of his voice, the golden brown of eyes, all these embraced him. Then he thought of Peter, his beloved Peter, getting a blow job. “From a fucking prostitute. How could he?”

He shut off his mind and emotions and concentrated on nature. At a fork in the trail, he turned left and the pathway climbed amid the Ponderosa pines. Before long, he was high over the narrow canyon, looking down a sheer face into the depths below. Red algae pooled like blood in the rivulets of the almost dry stream. An occasional Manzanita bush blossomed with pale, yellow flowers.

The trail turned a corner and he spied someone ahead of him, a man, who stood at the ledge and gazed at the vista below. Brandon frowned and started to turn away, but then looked back. His trim torso, his chestnut hair flecked with gray; that was familiar. He peered and certainty flooded through him. It was Rick, from yesterday, as beautiful as ever. Hesitation gripped him, and longing too. I know he’s supposed to be straight, but I could have sworn my gaydar lit up yesterday. When we sat together, and his arm brushed mine, I felt something, almost like we were meant for each other. Peter’s face flashed through his mind, and he recalled it contorted in pleasure this afternoon as Tony gave him a blow job. Rick’s image turned blurry, and he blinked back tears. I could sure use some companionship. He was so nice to me yesterday on the tour, almost like he cared about me. At the very least, maybe we can sit together for a while, like we did at Cathedral Rock last night. I felt so close to him then.

He edged forward to better take in the other’s profile. His nose has that little bend in it, like a sculpture of Adonis. I wish he and I...I don’t know what I wish. As he neared, Rick shifted his position, almost as if he intended to leap off the precipice. A sudden scrabble of rocks slipped loose from underneath his feet, and he teetered on the edge.

Brandon surged forward, grasped him by the arm, and jerked him back to safety.

Rick stumbled backward, lost his balance, and fell into his arms. The sunlight glinted in his eyes and a wild, shocked expression flared across his features. He stared at Brandon, and the color drained from his face. “You! What are you doing here?” He jerked himself away.

Brandon peered at him. “Are you all right? I was just hiking, and there you were. It looked like you lost your balance, so I grabbed you.”

“I think I’m okay,” Rick stammered. “Yeah, I guess that must be it. I lost my balance. I shouldn’t have been standing so close to the edge.” A shudder rippled through his body. “Thank you. I think you saved my life.” He shook his head and took a deep breath. “I’m so sorry. I shouldn’t have yelled at you.” His trembling hands brushed loose grasses and dirt from his slacks and his jacket.

“You should be more careful. I’m just glad I was here.” Brandon stood back and eyed him. “Are you sure you’re all right?” Those can’t be tear streaks I see. Not on his face!

“Well, it could happen to anyone. You know, I guess there’s a reason the guidebook says not to hike alone.”

“Yeah. I knew it wasn’t smart. I just needed to get away, you know? Be alone. And Eddie said this was the place to go.” At last, those brown eyes rose to gaze at him. “Thank God you were here for me.” He glanced around the empty forest. “Are you alone, too?”

“Yeah. Don’t tell the rangers. They’ll give us both a ticket.”

Rick’s eyes narrowed as he inspected Brandon’s features. “How about you? Are you all right? You look like you’ve been...I mean...you look upset.” He turned his eyes away.

Brandon remembered the tear-streaked dirt that blotted his image in the car mirror and wiped at his face. “Yeah, well, Peter and I kind of had a fight. It’s nothing. I just needed to get away for a while and be alone. To think.” He beamed, but his voice held a tiny tremor. “Just like you.”

“You want to talk about it?”

“No. It all seems so silly now. I mean, you almost died, and that makes our tiff seem so trivial.” He looked around and shivered. “Would you mind if we just sat for a bit, like we did at Cathedral Rock last night? I’d really like that.”

“Sure. I need to catch my breath.” He peeled off his jacket and handed it to Brandon. “Here. It’s going to get cold when the sun sets.”

He slipped into it, pulled it tight, and sat Indian-style on the ground. “Thanks. I don’t know what I was thinking, running off without even my shirt. I was just...well, never mind.” He patted the soil next to him. “Just sit by me, okay? Like last night?”

Rick settled next to him, and their arms brushed once more. Brandon felt a thrill of electricity at that touch and wondered if it was deliberate. They rested in silence while the winds whistled in the trees and a coyote sang a lonesome song from a distant hill. He thought of their happy time together the day before and, on a sudden impulse, reached into his pocket and pulled out the turquoise medallion. “Here.” He handed it to the other man. “I’d like you to have this.”

Rick’s eyes widened, and he held it like it was the most precious jewel he’d ever seen. “This is beautiful, Brandon. I don’t deserve this. You should give it to Peter.”

“No.” He didn’t want to talk about Peter, not now, and not to Rick. “I want you to have it. It’ll protect you from evil.” He grinned. “Just stay away from the edges of cliffs, okay?” He fought against sobs that threatened to bubble from this throat.

Rick slipped it over his neck. “I’ll wear it always. Thank you.” He reached out and touched Brandon’s cheek. “I’m twice over in your debt. How can I ever repay you?”

His chin trembled as he stared into those deep, brown eyes. “Don’t be mad. But I could really use a hug right now, someone to make me feel warm and safe. Could you do that, like you care for me?”

Rick’s features softened into a sad smile. “Of course I care for you. You’re my friend. I’m glad we got to know each other yesterday, and today you saved my life.” He scrunched closer, and his arm circled around Brandon’s back.

Brandon sighed, stretched out his legs, and rested his head on the other’s strong shoulder. “Thank you. This is nice.” He placed a palm on Rick’s chest, and the beating heart in the other’s breast pulsed against his hand. Rick turned his head and looked down at him. His warm breath wafted across Brandon’s cheek. “You’re quite a young man, Brandon. Peter’s very lucky to have you. I hope he treats you right.” His voice was a whisper, a promise, a prayer.

Tears leaked once more onto Brandon’s cheeks. He tipped his head up and stared into those brown eyes, so filled with compassion. He inhaled Rick’s sweet scent and the world seemed to stop. For one magical instant, as if in a dream, their lips brushed together. In the waning light, he thought he glimpsed a tear glistening in the other’s eye. He pulled back and gazed at that lovely face. “I wish...” he murmured.

“Yes?” That one word was so soft and deep that it sang a cantata of romance with Brandon’s heart.

“I wish I had someone to watch over me.” He sighed. Someone like you. But I dare not say it.

“That’s someone I’m longing to see, too,” Rick whispered, so faint the words floated away like smoke.

A cold wind gusted from the peaks, and they shivered. Rick stood. “We should get back before you freeze to death.”