When Ashton happens into a new bar, he's immediately taken with the young, male bartender.

Hayden is cheerful and flirtatious but his personal life is not so simple. Ashton is in an unhappy marriage. Hayden's boyfriend is possessive and controlling.

Can Ashton save him? Or does Hayden want to be saved? 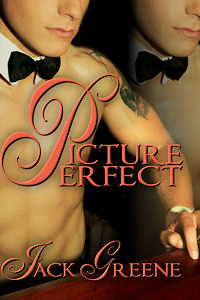 Tuesday night after yet another ten-hour day of selling BMWs had sapped his will to live. He couldn’t face going home just yet, so he decided to have just one drink to stave off the inevitable.

A long bar dominated one wall, with intimate booths arranged around two other walls. A small stage and a dance floor, neither currently occupied, took up the far end of the room. There were a surprising number of customers, and half the stools at the bar were occupied. It was hard to see how many of the booths were taken, but the place felt cozy and comfortable. The servers seemed to be attractive but fully clothed.

He made his way toward the bar, glancing up at the flat screen television hanging behind it. Instead of the expected sports program, there seemed to be one of those reality talent shows on, and the people gathered near it loudly critiqued the current performer.

The bartender, a tall, willowy young man, kept good-naturedly shushing the customers. “I’m trying to hear this!” The crowd would quiet for a moment, but erupt again at the slightest provocation.

It took a few moments before the bartender came to serve him—the next commercial break, in fact, but Ashton didn’t mind. He realized he had been smiling unconsciously as he watched the young man’s obvious delight with the show, awful as it was. When the bartender finally appeared before him, it was with an apologetic smile that Ashton found absolutely charming.

“Sorry, it’s the finals and I forgot to TiVo it,” he said by way of explanation. The young man leaned on the polished bar in front of him, delicate hands folded together. “First drink’s on me ’cause you had to wait.” The younger man’s ink black shoulder length hair framed a face that belonged on a magazine cover, all high sculpted cheekbones and full sensual lips and dark expressive eyes. He wore makeup, but it wasn’t overdone; black eyeliner made him look exotic. His lips were glossy and full.

So that was his introduction to Hayden. Ashton insisted on paying for the drink after all, earning him a sweet smile and an offer of his name as he shook one perfectly manicured hand.

He’d been coming back to the bar ever since. He told himself it was because the bar was on the way home, or the prices were good, or he just liked the laid-back atmosphere, but really there was only one reason.

That reason made a hell of a dry martini.

The first night he’d come home after visiting the bar, he’d been in such an uncommonly good mood that even his wife noticed, and she never noticed anything. She’d sniffed at him suspiciously, as if searching for a woman’s scent, but only wrinkled her nose.

“So why do you look so happy?”

He shrugged, picking up a pile of mail and browsing through it. “It was a really good martini.”

She finally shook her head and went back to her laptop.

Ashton smiled to himself as he remembered the way Hayden squealed and clapped his hands like butterfly wings when his favorite contestant had survived the cut.

Now, visits became something of a routine. Not every day, but at least once a week he dropped by the bar. Not Sunday or Monday, anymore, though—he’d quickly learned those were Hayden’s days off. The bar seemed much colder and lonelier then. There were definitely fewer people. Everyone loved Hayden, men and women. He was beautiful, but it wasn’t just that. He was the perfect bartender. He remembered people’s drinks, told uproariously funny dirty jokes, and he never seemed anything but upbeat. He charmed everyone.

Especially Ashton, who had never so much as been attracted to another man before. So it was some time before he realized why he couldn’t stop thinking about Hayden.

He wasn’t homophobic, far from it. He’d been raised in a very accepting environment. His mother’s brother was gay and he had no problem with being hit on by men. He would politely turn them down. He’d just never been attracted to a man.

Not that he intended to do anything about it, even after a particularly hot dream that had finally convinced him what he actually felt for the pretty man. He was married, however unhappily, and he wasn’t about to throw it all away and switch teams, even though the very sight of Hayden behind that bar put a smile on his lips, or that more and more often he dreamt of him. Those kinds of dreams had him jerking off in the shower the next morning.

It was a silly infatuation, he knew, and he figured it would wear off. He certainly wasn’t about to tell the object of his newfound lust. He wasn’t even sure Hayden remembered his name, though he always knew his drink. Ashton was just one of many customers, and he was content to gaze at Hayden once or twice a week. It didn’t hurt anyone, and sometimes he just drank a soda. Hayden never charged him for that. Hayden was always unfailingly polite and solicitous, but he was like that to all his clientele.

Even if occasionally Ashton fantasized that Hayden smiled a little more widely at him than the others, or batted his long eyelashes a little more…