Ever Greene was just six years-old when she vanished into thin air from the end of Cromer Pier.

Four months later, she reappeared, safe and sound, on the doorstep of her parents' house, more than eighty miles away. The child had no recollection of where she had been or with whom she had spent the time, but in her hand she clasped a silver and enamel brooch intricately fashioned in the image of a seahorse...

Ever Greene's childhood was haunted by nightmares and plagued by mysterious events. Now, as a grown woman, she hopes to put all that behind her and lead a purposeful life. She answers an advertisement for the post of governess— a perfectly respectable position for the dignified Edwardian lady.

This attempt to lead an ordinary life seems destined for chaos, however, when she finds herself working for an extraordinary bachelor. Gabriel Hart wants her, not to teach those sweet-faced children she'd envisioned as her pupils, but to transform him into a proper gentleman. A task of no little undertaking and far from what she'd anticipated.

And then Ever’s troubled life takes an infinitely more disturbing turn when the monster she called Pumpymuckles, who once chased her through those childhood nightmares, now stalks her waking hours instead.

But Ever Greene isn't that little girl afraid of the dark anymore.

Indeed, the darkness should be afraid of her.

This title can be read as a standalone, but is tied to The Deverells series. 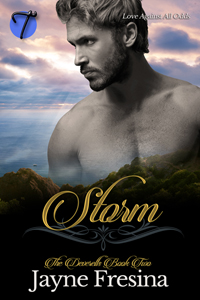 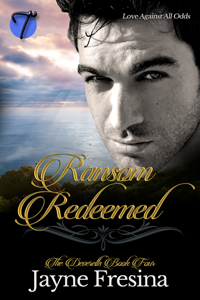 Where was the harm in one little peep? Everybody was out and the staff must have gone below stairs again. And she'd been told to explore while he was out. Nobody said anything about staying out of the master's study.

Taking a deep breath, she walked into the room and let the door stand ajar behind her. To close it would definitely make it seem as if she was up to no good in there, but it was all perfectly innocent, wasn't it? She was simply looking around, making herself familiar with the house.

Hands behind her back, she strolled to the fire and felt the caress of warmth gently touch her face. If it was not tended, the fire could soon go out. Surely Mr. Hart would welcome a good fire when he came back to the house. But having reached for the poker, Ever paused, shook her head. Not hers to worry about. She put her hands behind her back again. If a maid came in and found her interfering with the fire they might not appreciate it. Not her place. Not her concern. Perhaps it had been left to go out deliberately.

If she stirred it up, they would know she'd been in here.

Besides, Mr. Hart hadn't even thought about a decent room for her and had entirely forgotten she was coming until the last minute. He didn't care if she was cold and uncomfortable.

Ever sensed she wasn't going to like her employer very much. What sort of man would hire a woman without references and then forget to inform his housekeeper until the morning of her arrival?

Scattered, inconsiderate, arrogant. Forgets promises and leaves havoc in his wake, but thinks it all very amusing to keep other folk "on their toes".

Poor Mrs. Palgrave looked up to him because she was the old-fashioned, loyal servant, abiding by her master's wishes, whatever they might be. Forgiving his eccentricities. Making excuses for his behavior. Protecting him from "trollops". As if he couldn't manage that himself, if he wanted to. If being the operative word.

Her roving gaze now alighted on a brown-top riding boot discarded by the fire. The twin had been abandoned likewise on the other side of the hearth, where it lay half under a chair, kicked off with evident impatience. Both boots bore the shiny, polished patina of "brand new", and the box sat upon the chair cushion, the lid proudly proclaiming the bespoke makers 'Peal & Co.' and boasting of their royal patronage. Expensive. Yet the boots had been rejected by their new owner.

Restless. Aspires to be...well...doesn't really know what he wants. Hard to please.

Something whispered through her, like a subtle draft through her body. Again she looked over her shoulder to confirm that she was quite alone.

Her pulse had picked up its pace as if to warn her and yet there was nobody in the room.

Turning to the fire again, she impulsively reached for the coal scuttle and tossed another shovel of coal onto the fire. There, she would take the high road and see to his comfort, even if he did not do the same for her.

Smiling to herself, she replaced the fire screen and then continued her tour of his study, absorbing all that she could about her employer while she had this chance to explore unobserved. She ran a fingertip across the ornately painted globe inside its brass and wood frame, assessed the cut glass decanters in the Tantalus, and then admired the untidy, bulging library of books, stacked and queued behind leaded-glass doors. There seemed to be neither rhyme nor reason to the way the books were placed— travel guides beside poetry, and astrology beside wine-making. Subjects on anything a person could possibly think up.

Yes, that further substantiated her idea of him not knowing yet what he wanted.

Ever would have loved such a collection of books at her disposal when she was a child, for she always had so many questions running around her brain. Her father used to say he'd never seen such an insatiable thirst for learning.

A row of trophies and tall cups decorated the mantle, gleaming in the soft, wavering light, like Aladdin's treasure trove. All of these won with the power of a man's fists and the shedding of blood. Appalling, really, when one thought about it. Of course, there was nothing new about blood-sport for the spectator. The Romans had their gladiators at which to cheer and gape. Human sacrifice for entertainment.

Fearless. But was it bravery or bravado? Or the sense of having nothing to lose?

The walls of his study were covered in tournament posters and framed sepia photographs, showing various circus performers and fairground acts with a backdrop of striped canvas tents. She studied them closer, but among the costumed figures could pick out none that matched the vision she nurtured of the mysterious Mr. Hart.

The largest piece of furniture in the room, and the most ornate, was his desk. With thick legs intricately carved, it was medieval in style— something at which an Archbishop, or another ecclesiastical dignitary, would once have sat to cast fear and awe into the hearts of the humble peasantry. A wide leather chair crouched in readiness behind it, two plump, well-worn arms poised in wait. And there, on the blotter, beneath the oil lamp, she spied a pewter paperweight in the shape of a seahorse. Three small words were inscribed upon its body: Death, Love and Dreams. Tempted to pick it up, she satisfied herself instead by trailing her fingers over the curling shape, from the elegant head to the spiraled tail.

She'd read somewhere that seahorses cling with their tail for stability in the same way that babies cling to offered fingers. It was also true, apparently, that when they found their mate, seahorses entwined tails and danced together at least once every day, to maintain their attachment. And they mated for life. Somewhere in the vaults of her mind there lived the image of painted wooden seahorses spinning around and around in the breeze through an open window. But the memories from her very early childhood were nothing more than dashes of light that came and went through a lace curtain. Of late those memories had become even more faded.

Suddenly feeling an inexplicable hollow of sadness in her heart, she moved away from the desk and the seahorse.

Now there was no further avoiding the black cloth, and whatever secrets it held custody. The thing that had lured her into the room was before her, filling the corner like a dark altar. Saved till last.

Ever scratched the side of her neck with anxious fingers, feeling constricted by the tight lace collar that suddenly chafed her skin. Glancing over her shoulder, she checked the room again to be sure she was alone. The door was still ajar, the coals in the fireplace wheezing softly.

It was only a peep and if a man was vain enough to have himself sculpted in the nude, he surely ought to be prepared for unladylike curiosity. So she gripped the soft velvet between thumb and forefinger. Another breath. Another beat skipped within her heart.

And slowly she lifted the cloth.

"It's not a patch on the genuine article, you know." 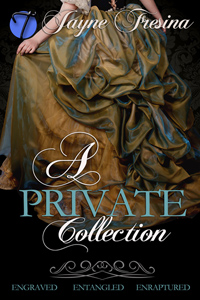