Harley: Protecting His Pack (MM)
Dawn H. Hawkes
In Shelf
$4.50
All Books In Cart
All Books In Bookshelf
Excerpt

Harley turned his head and realized the sun was just starting to rise.

“How did that happen?” He frowned.

“What?” Win tilted his head.

“Couldn’t have been later than five when we went to bed.” Harley shook his head. “I can’t believe we slept all the way till morning.”

“I’ve been up a couple hours.” Win giggled. “You seemed so peaceful, I didn’t want to wake you.”

“No more than I can handle,” Win assured him.

“No,” Harley shook his head. “After everything you’ve been through, I don’t want you to have to hold yourself back because of me. I’m gonna make this up to you. I’ve been thinking for a while now that this place could use a small kitchenette so that we don’t have to head up to the main house every time to make something to eat.”

Win sat up in bed, the sheets falling to expose his flawless chest. He studied his face for a minute, a serious look on his face.

“You don’t owe me anything, Harley,” Win told him.

“I know that, sweetheart, but you’re my mate,” Harley told him.

“And you’re mine,” Win said, pinning him with his stare. “I could have gone up to the house by myself. I’m not scared of going outside alone.”

“Then why didn’t you?” Harley frowned.

“I like watching you sleep,” he explained, not showing any embarrassment of his confession. “And listening to your heartbeat. It’s very soothing.”

Win emphasized his words by placing his hand on his chest as if feeling for the beats. He let his hand travel down, mapping out the ridges of Harley’s abs.

Harley had to restrain himself as he saw Win’s mind turning to other thoughts. Win looked hungry, and not for fruit.

“Huh?” Win blinked and looked back up at him.

His mate looked a little dazed.

“We should probably go and get something to eat now.” He shot his mate a crooked smile.

“Yes…but…we could probably…” Win hinted as his hand slipped under the cover towards where Harley had made a very obvious dent in the sheets.

Harley reluctantly stopped his mate’s hand from traveling south, bringing it up to his mouth, and kissing it tenderly.

“If we do, I have the feeling another day will fly by without any of us getting any food,” Harley reasoned to a disappointed-looking Win who was sporting a small pout.

“I guess.” He sighed, but then his stomach decided to rumble in agreement with Harley’s words again and he blushed fiercely.

Harley chuckled and got out of bed to grab them their clothes, handing Win the same clothes he’d been wearing these past days.

He’d always loved that sweater, but he liked it much more on his mate. He needed something that actually fit him, though. Hopefully, Jeremy and Bailey had taken care of that for him.

Up in the main house, Win was ecstatic as he was handed the large bag of clothes that actually fit. Jeremy had managed to drag Bailey with him on a small shopping spree to make sure their new brother-in-law had everything he needed.

They hadn’t really known what to get him and Harley hadn’t given them much direction other than that they would have to account for his wings. Jeremy had hesitantly shown him a silvery gray halter-top primarily designed for women.

Win had been thrilled and had no qualms about wearing the new top. He’d changed into it straight away and Harley had to admit it suited his mate.

The fabric was soft and fell down Win’s chest as if tailor made. And despite the fact it was from the women’s department, Win looked masculine in it as it complimented his wings, his shoulders, and long black hair.

Harley even noticed a certain silvery gleam to Win’s wings when compared next to the fabric.

How had he missed that?

After Win had dressed in his new clothes, Jeremy made him a decadent looking fruit salad with freshly whipped cream, and even threw some marshmallows into the mix.

The added sweetness of the marshmallows was definitely a big hit with his mate who let out a string of delighted moans as he devoured the food.

Harley had to force himself to eat his own meal of bacon and eggs, but it was difficult to tear his attention away from his mate.

“You’re thinking too hard,” Harley told him and tapped his finger against Win’s frown. “I see it right there.”

Win chuckled and Harley was glad he could ease some of his mate’s worries.

Win took Harley’s hand and held it against his chest as he leaned in to place a soft kiss on his lips.

Feeling his mate’s lips move against his never failed to make Harley’s skin tingle. They’d known each other for only a short time and yet Harley was already completely wrapped up in his mate.

He adored Win. Nothing he could say or do would ever lessen him in Harley’s mind. Somehow, he was certain of that.

His heart sang when Win was near, even before he woke up, though at the time it had been mostly muted by his fears of Win never waking.

Harley encircled his mate in his arms and pulled him close as he deepened the kiss.

Win moaned when Harley’s tongue slipped inside to taste him and he pushed his body hard against Harley revealing his lust.

Harley’s body responded in kind. With Win pushing up against him, his hardness rubbing against the fabric of Harley’s abs, Harley had to fight the urge to undress his mate. There were clear rules in the household about no nudity in the public areas of the house.

Harley couldn’t resist letting his hands slip in under the oversized sweater to caress Win’s back. His skin was smooth and warm and Win seemed to enjoy the touch as kept pushing his erection against him in firm thrusts.

Letting one of his hands travel up his mate’s back, he couldn’t help but to map out the part of his mate’s back where Win’s wings were attached with his fingers.

As he massaged the joints, Win pulled away.

Harley froze, thinking he’d done something taboo, but he saw only lust as he looked at Win’s face.

Harley experimentally let his fingers brush lightly over the area between Win’s wings.

“Stop!” Win squealed and dug his nails into Harley’s shoulder.

Win’s body was shivering as he took several deep breaths to calm himself.

Harley was tempted to do it again. His mate looked stunning, his face flushed with color as he fought back his impending climax.

“You sure you want me to?” Harley asked, his voice heavy with lust.

Win let out a breathy laugh. “Not here.”

Harley nodded in agreement and stood up, carrying Win towards the door. They needed to get back to the guesthouse.

He almost stumbled a few times down the path towards his place as Win nibbled on the side of his neck and sucked up a mark. It was dangerously distracting and an incredible turn on.

He’d intended on bringing them to the bed, but Win stopped his marking.

“Chair,” he moaned and nodded his head towards Harley’s armchair.

Harley did as requested and fell down into the chair as an eager Win threw off his sweater, and then moved to push Harley’s shirt up and away.

Raising his arms so that Win could remove his shirt, Harley was startled as the chair reclined. His mate had somehow managed to work out how while simultaneously stripping him of his clothes.

He was glad they wore sweats as they were easy to remove, and suddenly all that could be felt was skin against skin.

Win threw his head back with a moan as he pushed their hard erections against each other and Harley, too, couldn’t resist the act. He held on tightly to Win’s hips as he thrust against him.

“I need you,” Win groaned and slammed his lips to Harley’s in a desperate kiss.

Harley reached behind his mate to stretch him, but Win swatted his hand away and instead reached for Harley’s hard cock, aiming it against his entrance.

“Wait,” Harley tried to warn, but Win had no patience for that kind of nonsense.

He barely took the time to spit in his hand and lube up Harley's cock before slamming his ass halfway down Harley’s rod. They both groaned harshly, but Win didn’t seem deterred as he pulled back slightly and then pushed back hard again.

“You’ll hurt yourself,” Harley breathed out, but felt powerless to stop his mate from moving.

Win felt so tight around him that it was devastating. He wanted to fill his mate to the brim, to possess him in every way, but not if it meant hurting him.

Though he didn’t slow down much, Win did take more care as he worked the rest of Harley’s hard cock inside him.

When he was finally seated completely on Harley’s lap, they stopped and kissed tenderly. It didn’t take long before they started moving, though, and Harley had to work hard to make sure he didn’t come straight away.

“I need…” Win panted as their lips parted.

“Tell me,” Harley groaned as he thrust up to meet his mate’s moving body.

Instead of answering, Win spread out his wings.

It was a magnificent sight to behold and Win’s wings really did look like bat’s wings, just without being attached to any arms. They looked velvety soft, yet strong at the same time. They were quite big considering Win’s slight frame. Harley didn’t understand why his mate had stretched them out, though, not until Win started moving them to increase the force of which he was pushing himself down on Harley’s cock.

He hadn’t thought he could possibly sink any deeper into Win’s body, but with the added force caused by the fluttering wings, his mate’s body proved him wrong. 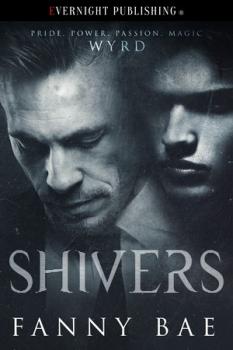