Raymond Searles has been putting in some long hours at work, to the detriment of his home life. One night, he sees something out in the pouring rain that shakes him out of his rut – two men putting on a very public display of their soaking wet lust. Raymond watches. Then acts. Putting his already precarious personal life in even more peril.

A drifter stumbles onto a field being picked clean by a group of itinerant workers, who then proceed to clean up on one another in the open-air shower facilities. Where do I apply? He’ll have to pass the rigorous interview process with the Boss-man, however, before he’s accepted into this workers’ paradise.

Rodney is hired as a bodyguard for the latest pop tart to top the charts, Countess Trollop. And he’s soon the one singing with pleasure, as wild concerts are followed by even wilder backstage after-parties. Until the Countess reveals a startling secret about her success, which leaves Rodney with more than just a beautiful body to guard.

He’s as immoral as the huge piece of meat he drives into other men’s asses and mouths. But when the tables are turned, there’s no telling how such a man used to dishing it out is going to react. Until it’s too late.

Decker likes it rough, wherever he can find it, with whoever will take it. But one night, he picks on the wrong man, and gets a taste of his own punishment. 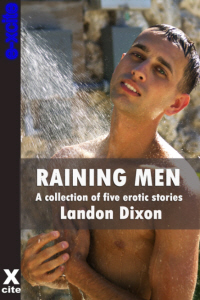 It was raining, coming down hard. The wind was gusting water against the glass, sheeting down in torrents out in the street.
Raymond rose up out of his chair and stretched his legs, looking down into the rain-washed night. He glanced at his watch – 1 a.m. The street was deserted, the pavement glistening like oil with the moisture, the air misted with it.
No, the street wasn’t quite deserted. A couple came running down the sidewalk, hand in hand, their other hands up over their heads, trying to shield themselves from the rain. They quickly gave that up and jogged to a stop. One of the men pushed the other up against the wall of the building opposite, and kissed him.
Ah, lovers in the rain, Raymond thought. He reached over and snapped the light off on his desk, to give himself a better view from the dark.
They were two men, all right. One was tall and lean and blond, the other shorter, smaller, with dark hair. They were haloed in the yellow, shimmering light of a streetlamp, the dark-haired man pinning the blond up against the wall and working the man’s mouth over with his mouth.
Raymond couldn’t see faces, but he could see the action clear enough; the only one who was seeing it, judging by the emptiness of the street and the buildings all around. The men probably thought they had the stormy night all to themselves, because the brunette pulled the blond’s T-shirt out of his jeans, baring the man’s chest to the rain, then to his mouth. The smaller man began vigorously kissing all over the taller man’s chest, raining his lips down like water.
Raymond could see now that this might develop into something. He could remember a time when he and Jess didn’t have a place of their own to make love, so they had to improvise with whatever was available. That was also a time when the passion flared so hot and bright they had to improvise as fast as they could. Like those lovers down in the street below.
Raymond felt his balls tingle, his cock surge in his pants, watching the one man ravaged the other man’s chest. That chest was smooth and slick and no doubt hot, getting felt up, the nipples getting tongued and sucked, no doubt hardening, expanding with erotic sensations thanks to the one man’s hungry mouth. Raymond slowly unzipped the fly on his dark-blue business suit and reached inside.
He shivered when he clutched his cock. He was even harder than he’d expected, pulsing with excitement, and need. It had been a long time, too long; since he’d done anything so sexually spontaneous. He glanced behind him at his open door. The outside offices were still dark, quiet, no one around to disturb him. He drew his erection fully out into the open, let it beat hotly in his warm, gripping hand.