When Lisa learns that her old boyfriend is going to be at their high school reunion, she sees it as a chance to come clean about the reason they broke up so many years ago. She didn't count on the chemistry between them being as hot as ever.

Gerry is a cop on a mission with the DEA. But it is still his high school reunion and Lisa will be attending. When the fiery redhead becomes a force to reckon with, he’s not sure how to handle her.

At their emotionally charged reunion, can they put the past behind them and rekindle a romance? Will the old flames re-ignite to change their destiny or could the long-hidden secret tear them apart once again?

The answer lies in the music box. 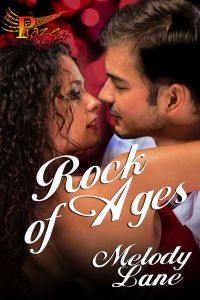 Lisa Farrell shifted on her chair. The Brighton Golf Course and Banquet Center was the nicest place the West Senior High School Class of ’88 could find within the recommended twenty miles of the high school, according to her friend Mary who had been on the reunion committee. This was the first reunion Lisa had ever attended and she was scared. She hadn’t cared enough to go to any of the others, which is what she told herself every time they had come around. This year, she had finally grown a set of cahones. Lisa had a special reason for coming tonight and it all had to do with Gerard Bale.

She could hear the sounds of people talking and laughing getting louder by the minute as more arrived. Perfume mixed with the perspiration of couples entering and exiting the dance floor. Pockets of brightness intermingled with dark areas throughout the room. Eighties rock music blared from the speakers, sometimes beating in time to the flashing lights on the dance floor as the DJ played the requests. Many sang along with the music they knew well. Hair metal, pop metal, hard metal—whatever you preferred to call it—belted through the speakers to everyone’s delight. Lisa had been told that the reunion planners decided all the music played tonight would be from that era. It had been a big part of their lives then, and for many people it was still a part of their life. Lisa couldn’t have agreed more.

She moved her legs out from underneath the circular table she shared with three of her old high school girlfriends and crossed them. Her legs were toned and tanned and looked great with her high-heeled strappy stilettos. Too bad she could barely walk in the four-inch wonders. Her tight, short emerald dress complemented her green eyes and newly refreshed red hair color perfectly. She felt good about her appearance, but a little uncomfortable dressing so seductively. The top of her dress was cut so low that it showcased her generous cleavage. Knowing that she might see Gerry had caused her to diet and work out religiously for the last three months. The hard work had definitely paid off in the way Lisa felt about herself, whether she saw Gerry or not.

“Lisa, where do you work at?” asked Keisha, an old friend that Lisa hadn’t seen since high school.

“Donatella’s Salon and Spa in Birmingham.” Lisa smiled. “Been there for years. Beautiful place.” She rolled the Riesling around her glass and took a sip.

Some of the old cliques were together again, for better or worse. In fact, most of the people here were hanging with the same people they did in high school. Lisa was no different.

“Haven’t been to Birmingham in a long time. Of course the upscale shopping and dining always appealed to me. How did they put so much style into such a tiny city?”

Lisa shrugged. “Don’t know, but it’s definitely there. I don’t live in Birmingham. Can’t afford it. I live in Farmington Hills, so the commute is only about thirty minutes for me. You should stop in the salon sometimes and visit. I’d give you the grand tour. I know you’d like it.”

“I may stop in, but it would be a little far for me to come on a regular basis. I live in Ann Arbor now.”

Keisha frowned. “You still do your own hair, too?”

Lisa nodded. “Yeah, but I haven’t had my hair layered shoulder-length for years or been a redhead very long. This is the ‘new’ me.”

“Not fair,” Keisha groaned. “You’ve always been good with hair. Ever since I can remember.”

Lisa’s eyes widened. “Good thing I had some kind of talent to turn into a career. That’s about the only thing I had a knack for. Never been any good in the love and marriage department like you, Keisha. Dionne was a catch from day one. The all-around athlete meets the social butterfly. Sparks fly, violins play. A perfect match all these years.”

“Speaking of old love,” said Mary, “do you really think Gerry’s coming?” She was the only friend in the group that Lisa still saw on a regular basis since high school.

Lisa shrugged. “Don’t know. Ask Eva. She’s the one who found out he lives and works here in Brighton. I had no idea he still lived in Michigan until three months ago, much less only twenty miles away from me. Eva located me on the Internet and talked me into coming to this reunion.”

As if on cue, Eva slid into the chair next to Lisa and spoke softly. “According to my sources, Gerry Bale will be entering Brighton Banquet Center any moment.” She raised her eyebrows. “Just wait until you see him.”

Lisa let out a breath, suddenly feeling nervous. Her skin prickled with the mention of his name. The flashbacks were already becoming too painful and even the wine wasn’t helping like she had hoped. Maybe it was a mistake coming here after all.

Always a friendly face in high school, on the fringe of the in-crowd, and a little on the quiet side, Lisa had never wanted to be the center of attention. She’d skipped athletic events and avoided every pep rally. Even now, she hadn’t really wanted to see a lot of her old classmates. The couple of friends she talked to on the Internet were enough for her. And Gerry? Some things were better left alone. Long-hidden secrets should stay in the past. She put a finger in her mouth and bit down on the pretty, red nail.

But if she really didn’t want to see him, why did she bring the music box?

Mary nudged her. “Don’t be nervous. Quit biting your nails. You’ll mess them up.”

“Yeah, you can. Aren’t you glad I talked you into that dress and heels? Those guys at the bar can’t take their eyes off of you.”

“Yes, Mary.” Lisa smiled. “They’re very pretty, but I’ll be lucky if I don’t fall in these tall shoes. I love the dress, but it needs to be tugged down every time I move before someone gets an eyeful of my butt. Seriously.” Her eyes turned toward the bar to see the men Mary was talking about.

“Who are they?” Mary squinted, ignoring what Lisa had said.

The corners of Lisa’s mouth eased upward as she glanced up at the men. “I have no idea.”

Mary frowned. “Wait a minute. I don’t know the two on the left at the end of the bar, but just recognized the two on the right. One of them is Damon Hensley, former basketball star forward who always seemed like a nice guy. He just has a little less hair now. Next to him is Brian Drake, former drug dealer extraordinaire. I see a vacant look in his eyes...still. He always had that look whether he was on drugs or not.”

Keisha raised her eyebrows. “Word is that he is still a drug dealer.”

Eva shook her head. “After all these years. Some people change a lot, some not at all.”

“Sex, drugs, rock and roll. Some people just don’t know the one they should give up.” Lisa winked.

“I know it isn’t the sex or rock and roll.” Mary stood and straightened her dress, then danced in place to the music. “Time to excuse me, ladies. We women on the prowl have men to attend to. I think I see someone over there that I used to want to know better. Kirk what’s-his-name.” She put her hand over her mouth and giggled. “I really don’t remember, but he’s not looking too bad. I’ll see if he’s wearing a ring. If not, I’ll ask him to dance.”

The women smiled as they watched Mary the leopardess take off for her hunt.

“Well, Keisha, while we wait for more excitement, why don’t you belt out a number from one of our high school musicals?” Lisa smiled. “You could always rouse the auditorium to cheer.”

Keisha sighed. “Sometimes I miss those days. I haven’t sung like that in years.”

Her gaze followed Eva’s, and Lisa couldn’t help sighing out loud as she perused her past lover from head to toe. Handsome Gerry looked like a male model walking right out of the Hunks-R-Us catalog. His dark suit was of an up-to-date cut with a wide-stripe green and blue tie. But the suit couldn’t hide the shoulders that were broad as a barn door and arms that pull-ups could easily be done on. Gerry had grown up over the years and definitely in a good way. Well over six feet, his body appeared to be perfectly fit in all the right places, making Lisa wonder about those other places that were hidden behind fabric. Gerry ran one hand nonchalantly through short, curly brown hair as he laughed heartily with a greeter at the door that he seemed to know.

Lisa could feel goose bumps pop far and wide all over her body at the sight of him. She quickly swallowed the rest of her wine for support, but refused to let herself be nervous any longer. It was time to be in control of her emotions and just be herself. As he turned her way, she could feel her nipples harden and cunt tingle. Her thong had to be getting wet with the desire she already felt. But she had come here to apologize, not go after the old boyfriend of her youth. She had no desire for a second chance at love with her high school sweetheart. Or did she?

His eyes traveled over the room as if looking for someone. Could he possibly be searching for her? When he found her table, they stared at one another for a space of heartbeats. Although she couldn’t see them well, she remembered his eyes to be drowning pools of blue that mesmerized her. His face looked older, of course, but he still had the strong jaw and nose. She wondered if his lips were full, smooth, and utterly kissable like in the past.

But enough of that.

He recognized her with red hair after all. As he gave her that sexy, crooked grin of his, all the worries she had about seeing him melted away. She sat up straighter, lifting her shoulders and head with pride. And, yes, her thong was definitely wet. “Hello,” she mouthed.