For Peter and Kris, Sitges feels like a second home, and as they party the night away, they meet a bear called Nic. As they head out to their favourite nightclub, Nic joins them in one of Sitges famous foam parties.

A strange letter arrives on Christmas Eve, but when its contents are ignored, Christmas itself decides to intervene and return the magic to a heart that has forgotten how to love.

Christ, it was a sight for sore eyes. The narrow streets of Sitges filled to the brim with hundreds of sweaty, leather-clad bears and their adorable little cubs. The air hummed with the scent of baby oil and soggy animal skin, but it thrummed with an excitement that we called Wednesdayitis. Wednesday nights in Sitges meant only one thing, the foam party at Trailers. Hence the baby oil.

Nothing could beat the throbbing pulse of Sitges, probably the most famous gay town in the world nestled on the coast of a stunning stretch of beach some twenty minutes’ train ride from Barcelona. Every time we got off the train in its quaint little station, it felt like we arrived home, for that is how much Sitges lived in our hearts. After twenty years of holidaying in our gay paradise, we even thought to retire there one day. It was our big dream.

Some dreams are just never meant to be.

The old town buzzed with diversity. By day it tinkled to the sound of wine glasses and cutlery and chimed with the sounds of so many tills singing their happy songs. For those with an underwear fetish, it must have seemed like Heaven on Earth. Designer thongs. Designer briefs. Designer swimwear. More Calvin Klein than you could shake a stick at, and an entire building was given over to the divine Ralph Loren. Even the tight black thong that clung to my ball sack had a Gucci label in its rear. Ah, but by night, well, it sang a song of a different colour.

As the sun set across the ancient historical Church, the stars created their very own glitter ball in a startlingly clear sky. That was when the queens came out to play. We put away our manly conventions in favour of leather, stud, and boot. The shops closed, and as if by magic they disappeared behind shutters and glass, replaced by bars and clubs that catered to every conceivable taste. Parrots Bar for the twinks. El Horno for the muscle Mary’s. XXL for the ravers. Man Bar if you liked your vodka with cock, and who doesn’t, I say. Kittie’s paraded endless drag queens before your startled gaze in a tidal wave of feather and sequin, a fun way to start the evening before the fetish bug set in. And for those who liked their drinks expensive, Luxor Bar served their champagne on the rippled six packs of their thong-clad bar staff. I once drank a vodka shot off a particularly hard stomach, but I didn’t stop at the vodka.

Each venue pulsed to its own distinct beat, track melting over track to mix in the streets in a hypnotic cacophony of thrumming bass. It gave the winding alleys and walkways their own heartbeat, and that was the point. More men spilt onto those winding narrow cobbled walkways than stood inside their poorly air-conditioned interiors. It truly was a party in the park!

Magic. It’s how I will always remember the amyl nitrate infused atmosphere of Sitges. The streets alive with hundreds of sweaty gay men with bulging, glistening muscles, felt like a coiling stream of testosterone fuelled hormones winding its way through our libidos. Even the dark, blasphemous sky above glittered to our beat.

El Horno and XXL stood directly opposite each other down a particularly narrow alley, so the crowd of muscle and six-packs that gathered outside their hallowed doors was quite the delightful thing to behold. Leather, denim, fetish, even the odd man-kini all paraded before my appreciative eyes with complete gay abandon. No one gave a shit. We wore what the fuck we liked and revelled in the delights of costume and role play in a scrum of hard, muscular glee.

Part of the fun of walking to Trailers involved squeezing through the sea of bodies sandwiched between the two bars. It was an experience of smell and touch. They pressed all around me as I moved through their solidness, their hands all over my body, my ass, their eyes devouring my slim, glistening body. Beer and vodka mixed with heavy musk, the smell of man and sex that aroused the sleeping dragon encased within my leather sack. How I enjoyed the feel of their slick bodies against my naked skin, their hardness pressed against me, muscle and dick. I may have copped a feel, or two. Then there was the all prevailing Au de baby oil. Let me explain. 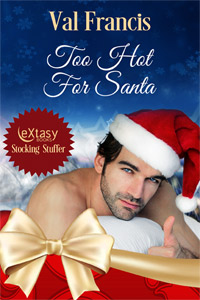 Judgment of the Moon and Stars (MM)
Tymber Dalton
In Shelf
$4.50
Tweets by
sirenbookstrand