For as long as she could remember, Rachel Cunningham feared and hated her psychic ability.  When a strange man accidentally touches her, she sees the death of thousands. Rachel knows the FBI won't believe her, but she has to try. Lives are at stake.

Special Agent Arrons dismisses her information as a publicity stunt, yet his conscience nags him.  When Rachel identifies an Al Quaida cell leader, Arrons puts his career at risk and issues an alert.

Together they race against time to prevent a terrorist attack. Will the terrorists' threat succeed, or will Rachel and Arrons find the solution in time to Save Tampa? 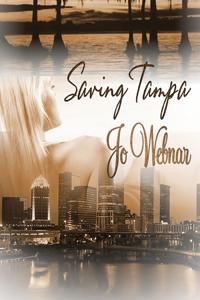 What if you knew something horrible was going to happen but you could prevent it, would you tell someone? Sure, we all would. What if you saw it in a vision and had no proof? Would you risk your credibility to come forward? These are the questions at the heart of Saving Tampa, an on-the-edge-of-your-seat thriller from Jo Webnar.

Rachel Cunningham is a young woman with a problem. She sees things that are happening, have happened or are about to happen. Her psychic ability has allowed her to help others but it also prevents her from having the kind of quiet normal life she longs for. When a stranger at the mall bumps into her, a connection forms between them giving her small glimpses into a terrorist plot that will kill thousands. Fearful of the ridicule she will face if she comes forward, but more afraid of the cost of her silence, Rachel contacts her brother, a police detective, for advice.

Special Agent Hawk Arrons has his own problems with relationships and one of them is his boss. Threatened by Hawk's investigative abilities, the SAC gives Hawk the worst assignments and downplays Hawk's achievements. When Hawk is given the assignment to interview Rachel, he senses his career is about to take a major hit in the credibility department. After their disastrous first meeting, Hawk checks into the pretty blonde's background and finds that she is the real thing. Reluctantly at first, the two join forces to try to prevent a biohazard attack that could wipe out the State of Florida. As they follow the twists and turns of a terrorist's mind, Rachel and Hawk discover that in Saving Tampa, they are also saving themselves.

Jo Webnar has written a wonderful suspense that is as timely as it is entertaining.

"Ms., if you're doing this to get publicity

I think you should know it's a federal offense to falsely involve the FBI and Homeland Security."  He prepared to get up, snapped his notebook shut and put it in his pocket.

Before he had a chance to stand, she moved in front of him and shoved him back onto the couch. "Now you wait just a damn minute!  I'm a US citizen, and I wouldn't make a report if I didn't think this was serious. Do you think this is fun for me?  Then you have another think coming! Aren't we, as concerned citizens, supposed to report suspicious occurrences? Well, I'm
telling you there was something about this man that made me think of 9/11. Before you start judging me, asshole, check my reputation with the Chicago PD."

"We got the call from your...uh...brother. Ms. Cunningham." His tone was as deadly as rifle bullets.

"I'm not talking about Danny. Why don't you call Captain James Anderson at the Hyde Park Precinct?"

Her face was red and twisted in anger as she
leaned toward him. This time Hawk made it to his full six-foot three-inch height, and loomed over her. Reluctantly, she took a step back.