Second Chances and Other Short Stories

Noreen Vance, in "Always a Bridesmaid," is a high-flying ad executive, who works hard for her independence and success. So when egotistical, male-chauvinist Quinn Martin re-appears in her life, why should she give him the time of day, much less a second chance? Todd and Michelle have big plans for their second honeymoon. But Michelle has second thoughts about their domestic discipline relationship. Will she ruin their chance for a romantic getaway? If you like spanking romances, you'll love this collection of stories! 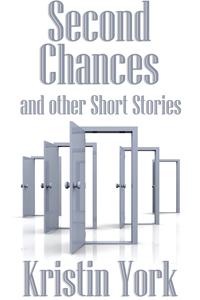 Second Chances and Other Short Stories

"Ladies and gentleman, we are making our final approach into Columbus, Ohio. The weather is partly cloudy, with a temperature of fifty-seven degrees and brisk winds out of the northwest. Please stow all tray tables and return your seats to the upright and locked position for final descent."

Noreen Vance, thirty-seven year old ad exec with Lakely and Smithe, carefully folded her copy of the Washington post, tucked it into her shoulder bag and stowed her belongings under the seat in front of her. From her window seat, she watched as miniature houses grew big enough to accommodate families, black ribbons became highways and the skewed vision from high above was transformed into the reality of life in Columbus, Ohio. The wheels beneath her made contact with the runway and, as usual, she grasped the armrests with white-knuckled ferocity. It wasn't the flying she minded, so much as the landing, which she'd once heard described as a "controlled plummet back to planet earth." She'd never been able to shake those words, just as she had yet to slough off so much else that she'd heard, lived, and experienced during her time in this city. The plane shuttered to a halt and, relaxing slightly, she dislodged her fingernails from airline property and gathered up her things.

"Three days," she reminded herself briskly. "Two-and-a-half, really, and then you'll be back at the office. You can live through sixty hours of anything."

She waited impatiently for the aisle to clear, then nearly fell down face first when the man behind her swung his carry-on into the back of her knees. The fact that he barely spared her a curt, "Sorry" did nothing for the color of her mood. Teresa--her best friend and the only person capable of talking her into this trip--was the expert on auras, but even Noreen knew that her mood could be described with one word. Black. Escaping the canned air of the plane, a chorus of "Ba-bye's" ringing in her ears, she struggled to gain control over the tension that simmered just beneath the surface. Sure, she'd had a lousy morning at work, been caught in a rainstorm on the way to her car and--following a tedious delay at O'Hare--had arrived, soggy and bedraggled, an hour later than expected. Still, this was Teresa's big weekend, and she wouldn't spoil it by allowing her crappy attitude to show.

She took the boarding ramp slowly, fumbling in her carryall for the car rental papers. She glanced at her watch, grimaced, and whispered to herself. "Okay. 4:53 in Chicago is 5:53 here. The rehearsal starts at 7:00, so that gives me an hour to get my bag, the car, and get to Newark for the rehearsal. Damn." She shook her head, her disgust for the poorly run airline industry evident as she gained the terminal, and went digging for her cell phone. Teresa would worry if she was late.

The voice, smooth and rich as satin, took her by surprise. Her head snapped up and, for a moment she simply stared at the speaker, stunned beyond words. It couldn't be. He wasn't supposed to be here.

Quinn Martin smiled at the woman who stood before him. Her brown hair was still damp and, therefore, appeared darker than normal. The natural curl that she hated had obviously taken hold, and unintentional ringlets framed her face, bringing out the gold flecks in her hazel-brown eyes. The effect was one of tousled beauty and the memory of Noreen stepping out of the shower--his shower--had him stifling a groan. He wanted her, damn it. Even after three long years, she still wielded an undeniable power over him. In that moment, he wasn't certain if he'd come to pick her up in order to prove himself free of her memory, or to get the worst of the reaction over with in private.

"What are you doing here?" She folded her arms across her chest and considered him.

"I heard about the flight delay, so I figured it would be quicker if I picked you up." He shoved his hands in his jeans pockets and returned her gaze. "You got a problem with that?"

"Actually," she said as shifted her bag higher onto her shoulder, "I'm afraid you've wasted your time. I've got a rental car waiting." She made to walk around him, ostensibly to search out her luggage. "I just have to get my bag first and, since I'm running late, I'm sure you'll understand if I don't stay and chat."

He fell in step beside her, shortening his stride so she could keep up. "I called and cancelled your rental. I'm parked in short term, so all we have to do is get your bag and--."

"You cancelled my rental?" Noreen stopped in the hallway, and was nearly run over by a family that had clearly been reunited at the boarding gate. Quinn pulled her out of their way, saving her from the boisterous man with a video camera who, walking backwards, would have mowed her over. "What do you mean, you cancelled my rental? Of all the arrogant, inconsiderate things to do--."

"It's no big deal." He shrugged and she wanted nothing more than to slug him. "I knew you were running late and thought I'd save you some time, and money. One would think you'd be grateful."

"Grateful," she repeated, making a desperate bid to hold onto her temper. "You would think that, wouldn't you? Damn it, Quinn ... you haven't changed a bit."

"Apparently, neither have you." He grasped her arm and guided her, quite firmly, into an empty boarding gate. "You're still a brat."

"And you're still an egotistical male chauvinist, steam-rolling over everything and everyone in your way." She glanced at the paper work in her hand, found a phone number for the local rental desk, and keyed it into her cell phone. Before she could hit send, however, he grabbed the phone from her hand.

"Look," he said, clearly exasperated, "I shouldn't have cancelled your car. Okay?" His green eyes glittered like cut emeralds. "But for crying out loud, Noreen, why don't you cut me a break? Not everything I do is motivated by my ego or chauvinism."

She took a deep breath and willed herself to stop and think. Two small hands, fisted at her sides, were the only outward signs of anger that she allowed herself. "Maybe you should cut me a break," she responded. "After all, the only thing you've really accomplished by showing up here is to make us both late. So, how about the truth this time?"

He shoved his fingers through his auburn hair, sparking a memory inside her. She caught her breath, ruthlessly smothered the ember, and waited for him to answer the question.

"I wanted to get this over with." He turned back to her, and she was struck by the resignation in his eyes. "I knew it would be hard to see you again, and I didn't want it to be in front of Teresa and Evan and everyone else who'll be there tonight." His blue-green eyes sought out and held her gaze. "Can you understand that, Noreen? Can you forgive me for not wanting to fall apart in front of our friends?"

His honesty took her by surprise and she softened. "Sure." She managed to relax a bit and, forcing a slight smile to her face, teased, "Not that I believe for one moment that you'd really fall apart, Quinn Martin ... but I forgive you. So, do you think we can make it to Cherry Valley on time?"

His grin made him look much younger than forty-two. "In old blue? What do you think?"

"Old blue?" Noreen moaned, but couldn't stop herself from smiling at the thought of the old, souped-up Chevy truck that Quinn cherished. "I think we'll be there in plenty of time, after all."

"Yeah." He struck off down the terminal. "And if we're really lucky, we might make it in time for you to change your clothes. You look like a half-drowned rat."

"Thanks," she muttered as she hurried to catch up with her chauffeur. "You always did have such a pretty way with words."