So Much More Than Naked II

Ryan is the love of Darcy's life. He's come a long way in learning how to give up control and trust, but he's still holding onto the security of keeping his own place, which bothers Ryan. When Darcy's brother Martin comes to visit, Darcy'sn atural instinct is to bring his brother to his old apartment, instead of to the home he shares with Ryan. Ryan is hurt by this, thinking Darcy doesn't really consider them life partners.

Ryan is well aware that Darcy's life circumstances have made him a natural Dom, and it's for that reason, he's reluctant to do any kind of sexual role play with him which would give Darcy the taste to dominate; although secretly, Ryan craves submission. When Ryan's ex lover reappears, it rekindles his addiction, an addiction that went too far in the past. In his attempt to ensure that Darcy learns to trust, Ryan neglects his own sexual needs, which leads to circumstances which threaten to tear Ryan and Darcy apart for good.

So Much More Than Naked II

The shower was running. He smiled. The thought of Ryan naked and wet in that shower excited him. His cock stiffened. He took off his jacket and threw it onto the bed. Then he hastily tore off the rest of his clothes and left them in a pile on the floor, which was not his style at all. He'd become such a slob since he'd moved in here with Ryan. He walked into the bathroom and moved the shower curtain aside. Ryan glanced at him as he rinsed the shampoo out of his hair. Darcy stepped into the shower with him. "Hi," he said, looking him up and down. He licked his lips, not sure of the reception he was going to get.

Darcy let his gaze travel down his chest to his cock, which was semi erect. "Yeah. I'm hungry. Hungry for you. I want you," he breathed. "I've been thinking about fucking you all the way home."

"You are such a liar," he accused, one side of his mouth lifting slightly. "You were wondering if I was pissed at you and that's why you stayed so long in your stuffy office."

Darcy felt his knees go weak.  He swallowed, his cock was so hard now it hurt. He looked into his eyes. "Are you?"

"Am I what?" Ryan backed against the tile. The warm water from the shower battered his nipples, hardening them, inviting Darcy's touch, his lips.

"Tell me what I can do toahmake it up to you?" Darcy smoothed his thumb over one of Ryan's nipples.

"Give me a few minutes to think about it." He reached behind Darcy's head and dragged his mouth onto his, kissing him hotly.

Darcy moaned. He pinned Ryan against the wall with his chest. "Yes," he murmured into his mouth. "Yes. Take me downstairs. Make me feel it. Make it hurt. I want you so much."

Ryan pushed him away gently. "Will you beg for it?"

Darcy nodded with a grin.

Ryan narrowed his eyes. "On your knees?"

"If you want me to." He gave him a little boy look.

"Take your shower and meet me downstairs, naked."

Ryan chuckled and got out of the shower. "Don't be too long."

"Are you kidding?" Darcy scoffed, lifting his erection in his hand.

"Ah, naughty boy, none of that," he wagged his finger at him.

"After I've made penance," Darcy said, soaping his chest, "I want to fuck that sweet ass of yours."

"We'll see," Ryan replied on the way out of the bathroom.

The shower turned out to be a quick rinse. He dried himself quickly and bounded down two flights of stairs to the basement.

Ryan was waiting. "It's time to pay for your sins, little boy."

"Oh, and I love to make retribution," Darcy growled.

"Up on the table," Ryan demanded with that expression on his face, the one he wore when they played these games, serious yet sensual.

Darcy sobered and got up onto the table. It was all in fun, but they each had to play their parts. It's what made it such a turn on.  And it was even better now than before because Ryan knew exactly what he liked and yet he never ceased to surprise him, even push the limits a little. Never once had he not felt safe. He trusted Ryan explicitly.

Darcy shivered a little as Ryan came closer to him. He wore a pair of jean shorts, tight and sexy. Ryan knew that he felt even more vulnerable when he was naked and Ryan wasn't. Ryan lifted his arm and ran his fingers up to one wrist and then the other as he fastened the cuffs around them. A larger strap drew both wrists together over his head. "Give it up, baby," Ryan said softly, "give it all up. Surrender because there is no place for you to run."

Darcy closed his eyes as Ryan lifted one leg into the manacle located slightly to the left side of the table about four feet in the air. He secured one ankle, then the other. It spread him out, open, exposed.

"Open your eyes," Ryan told him. His voice was firm, commanding, but not at all harsh.

Darcy opened his eyes. He was trembling all over. Ryan ran a hand up the inside of his left thigh just to his balls. Darcy whimpered. He knew what was coming. Ryan stood there admiring him. "You know how wanton you look, how exposed?"

"I will," he said softly, "all in good time." He reached over and caressed his hair. "First, I need to increase your agony." He produced a pair of nipple clamps. "Nice and tight. I don't think your nipples are as stimulated as the rest of you."

"Relax," Ryan told him. He laid the nipple clamps on the table between Darcy's open knees. He spread some sweet smelling lube on his fingers and moved closer. He pressed his mouth against Darcy's for a few seconds and kissed him passionately, then moved back. His gaze settled on Darcy's nipples. He moved his oily fingers over both of them at the same time, pinching, pulling, flicking them hard between his thumbs and forefingers. Darcy's cock jolted. "Um, baby, that feels"

"Shush," Ryan said. "Don't talk. Just feel it. Feel it right to your balls and know that I'm in control. I can do anything I want to you, anything that would bring me pleasure. It pleases me to see your nipples hard and stiff like that."

Darcy felt the pinch of the clamp chomp down on his left nipple. He licked his lip. Without warning, Ryan clipped the right nipple. It stung beautifully, burnt a little as Ryan pulled on one with his teeth. "Oh yeah," Darcy managed.

"We don't want you coming too fast, baby," Ryan said. "You're already leaking. Here, let's wrap up that luscious cock of yours." 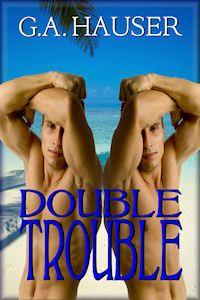