How do they react? For starters, they branch out to a new sizzling encounter with a Latino couple who’ve been flirting with them on the lifestyle site. Addition is so much better than subtraction.

As a finale, Jen and Brett stage a house party to die for.

Trying not to smile at the all-too-familiar awkward moment, Jennifer Andrews blew her husband a kiss and swiveled her chair so she could give Angelica Santiago what she hoped was one of her best seductive smiles. The wiry Latina and her husband, Rico, had been fun dinner companions, with conversation ranging from kids, to careers, to experiences with swinging. Now the four of them sat in Jen and Brett’s hotel suite, waiting for someone to make the next move.

The couple had proven to be as intriguing as Jen and Brett hoped. Angelica, a former thoroughbred jockey, was now an assistant trainer. Rico, who had trained horses early on, now primarily worked as a bloodstock agent, helping match up sellers and buyers for no doubt a handsome fee. Rico, like his wife, was in his mid-fifties. He had a cute, small mustache and salt-and-pepper hair. Jen couldn’t decide which of the two she like the most. Both laughed easily and seemed quite comfortable with each other—and, apparently, with the progression of the evening.

Jen caught each of them lustfully eyeing her long legs, which she’d purposefully showed off by wearing white thigh-highs with a black mini. Had either of them caught a glimpse of her bare pussy? Brett had encouraged her to go commando. It always thrilled him to know that his wife, sitting beside him at a restaurant looking like a fairly typical soccer mom or grandmother, was bare and ready for play. On more than one occasion when they’d met a couple who bored them to tears, his hand would squeeze her thigh, letting her know they’d have a good time as soon as they could make their excuses and ditch the bland couple across from them.

But not tonight. No, they both were eager to take things to the next level with Angelica and Rico.

Once they’d settled in the suite, however, the conversation had become a bit strained. Jen knew they were each trying to figure out how to gracefully begin the play part of the evening. Given her experience with swinging, it no longer surprised her that even for experienced swingers, getting the clothes off and getting onto the bed could sometimes be quite daunting.

Brett grimaced at her. Rico looked furtively at his wife and then at Jen.

Jen chuckled and stood, extending her hand to the wiry, brown-skinned woman. “Come on, Angelica. If we’re going to play, which I assume we all want to do, it looks like it’s up to us to start things rolling. Our men are too gentlemanly to make the first move. Besides, I want to see those perky breasts that have been playing peek-a-boo with me all evening.” 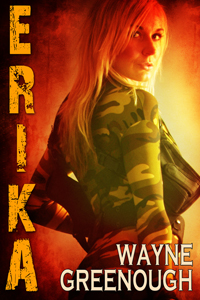 Hot to the Touch
Adriana Kraft
In Shelf
$1.59
Tweets by
sirenbookstrand